A very unmerry Christmas at Fairfax ... Malcolm for North Sydney ... Greens, they all look the same ...

The SMH Scrooge. Fairfax’s Sydney staff crowded into the Star City Sky Terrace last night to celebrate their annual Christmas party. Crikey’s tipsters approved of the view, but they weren’t there for long. The bar closed at 9.45, leaving disgruntled journalists keen to kick on trudging to the “dreadful” Pyrmont Bridge Hotel afterwards. Once settled in, they had redundancies both forced (at Drive) and unforced (as a result of Sunrise) to discuss, so we’re sure it was as cheery as most gatherings of journalists these days.

We suppose it’s worth pointing out at this point that at least Fairfax is still throwing Christmas parties. News Corp staff haven’t been so lucky this year. What’s the goss from your office Christmas Party? Dancing on marble tables? Stingy bar tab? Drop Crikey‘s Christmas Party Watch a line (you can stay anonymous).

Nun for you. The Australian Border Force has decided that nuns are the latest danger to its detention programming, suspending a program where nuns from the Brigidine Asylum Seekers Project took children out of onshore immigration detention on day trips during school holidays.

The project, run by the Brigidine Sisters in Melbourne, has for the past four years taken asylum seeker children in the Broadmeadows detention centre out on day trips. Approximately six months ago, this program was suspended, pending review.

Sister Brigid Arthur told ABC’s Jon Faine yesterday morning that no reason was given as to why the program was suspended.

“Presumably the review has seen to have had a negative outcome,” she said.

Arthur said activities included taking children to Collingwood Children’s Farm, to the zoo, to playgrounds, and for picnics in the park. “Anything that can entertain the kids … You can’t really fix up detention, but you can do a few things to ameliorate the worst aspects of it.”

Arthur said there were more and more “draconian” things being brought into the detention centre in Broadmeadows, and there was no need for that level of security for the asylum seekers.

A spokesperson for the Department of Immigration and Border Protection provided a statement to Crikey stating that programs were routinely reviewed within the department, including the one run by the sisters, and excursions were allowed with appropriate governance and supervision. The excursions run by the sisters did not have the appropriate amount of supervision, the department said:

“The Department has recently undertaken a review of a program which had allowed detainees to leave the centre unescorted by Serco or departmental personnel. A review of this programme found that on a number of occasions outings undertaken as part of this specific programme were not deemed appropriate and there was limited supervision of the activities.”

The spokesperson said that the company running the detention centre, Serco, would offer excursions to asylum seekers in “a safe and controlled manner”, and denied that access to visitors had been limited.

Innovative way to get votes. Who’s the Liberal candidate for the seat of North Sydney? Who cares, when Malcolm Turnbull is PM? That’s the message this letter from the PM was sending to the voters this week, opening with “Australia is a smart and skillful country. Australians are innovators and problem solvers.” In the image posted on Twitter by a former Labor staffer, it goes on with buzzwords like innovation and opportunity in bold. Liberal candidate Trent Zimmerman is only mentioned in a post script at the very end: “PS: Please vote for Trent Zimmerman, Liberal, on Saturday.” 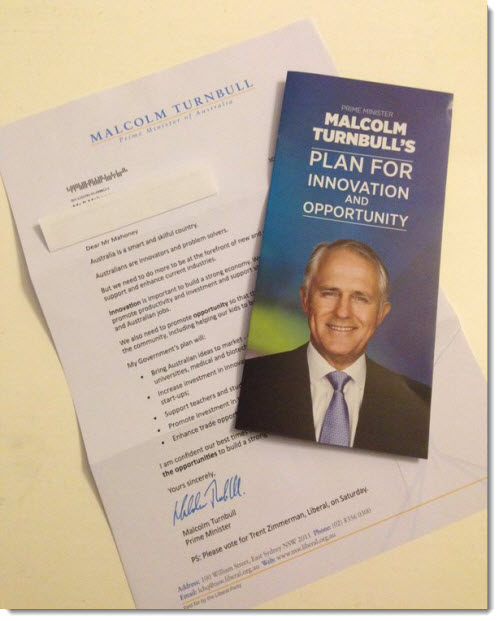 Data breaches in the dark. On October 23, Attorney-General George Brandis was very clear when asked about when the government would introduce a mandatory data breach notification bill, and went to the trouble of correcting himself — something highly unusual for the man who regards himself as Australia’s greatest living jurist: “Senator Ludlam, you asked what the government’s intentions were in relation to legislation for a mandatory data breach notification scheme, and as I recall, my answer was that the government intends to legislate for such a scheme this year. I should have said the government intends to introduce legislation before the end of this year.”

When the Joint Committee on Intelligence and Security early this year paved the way for a data retention scheme, one of its conditions was a mandatory data breach notification scheme, so that companies storing data would be required to tell customers if their data was stolen. Brandis promised the committee he would do just that. As his October answer indicated, Brandis then changed his position to merely introducing  a bill for a scheme. Well, today’s the last sitting day of the year, and there’s no bill, so even that modified promise will be broken. The funny thing is, it’s wouldn’t even be a challenge for the Attorney-General’s Department to knock together a bill — they wrote one for Labor in 2013 that was introduced into Parliament, but it expired with the election. We asked Brandis’ office when the bill would be introduced, but they didn’t bother replying.

Party like it’s 2006. It’s journalism’s night of nights tonight, with media identities from all over the country descending on Crown at Melbourne for the Walkley Awards. Ms Tips hears that the one and only Stephen Mayne will be presenting a few awards. It’s the first time the Crikey founder will be back on the Walkleys stage since 2006, when Glenn Milne helped him back to his table … 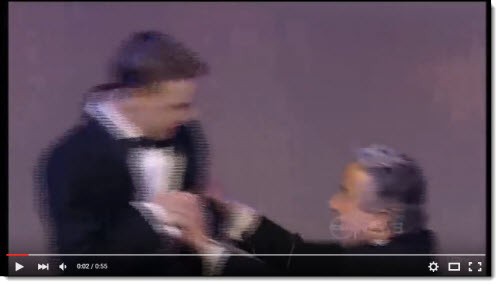 Crikey‘s best and brightest will be there tonight to give you all goss, glam and upsets in tomorrow’s edition (and if anyone wants to Express Post Berocca to the Crikey bunker in the morning, we would not say no …)

The art of the insult. Greens Senator Scott Ludlam used a speech in the Senate last night to wage a blistering attack on Senator Ian Macdonald. Speaking on the report handed down from the inquiry into the government’s National Program for Excellence in the Arts, Ludlam called Macdonald “an individual who uniquely combines aggression with total cluelessness, unlike anybody else in this chamber that I am aware of”. Ludlam lambasted the Coalition, describing the the program as “an utterly debacular policy”, introducing the word to Hansard for the first time.

“If you want to know just how badly the government got it wrong, watch Senator Macdonald’s humiliating rant. Senator Lazarus was too polite to name him, but Senator Macdonald behaved like an unhinged and tantrum-prone five-year-old, in a way that reduced one witness to tears and forced the chair’s hand on a number of occasions. I do not use words as strongly as this against individuals very often in this place. I do not know what the Queensland LNP have on their minds.

“The entire arts community of this country were insulted, but they did put in a spirited defence of themselves and the institutions that they have helped create, over decades of establishing an arms-length, peer-reviewed Commonwealth funding body for arts body. It is not like there are hundreds and hundreds of millions of funds washing around for the arts community. The Free the Arts campaign and those from Feral Arts and others who played an informal convening role absolutely did the arts community proud.”

How do you solve a problem like Donald Trump? A leaked confidential memo from the National Republican Senatorial Committee in the US has revealed how the NRSC executive director believes Republicans should act if Donald Trump wins the party’s Republican presidential nomination. How do you deal with Trump? Cautiously, the seven-page memo says: 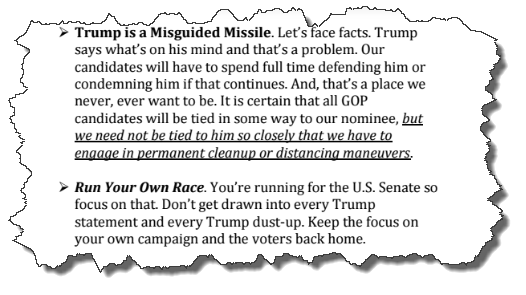 If at first you don’t succeed, try, try again. We have been known to mix up Greens Adam Bandt and Richard Di Natale, but the subs at The Australian are even more confused. An article about a sit-in by environmental protesters at Parliament House yesterday originally ran with this photo of MP Adam Bandt, naming him as his colleague Senator Scott Ludlam. As Crikey readers know well, Ludlam is in a class of his own — he was Crikey‘s Sexiest Male Politician 2014 (poor Bandt was not even in the running). 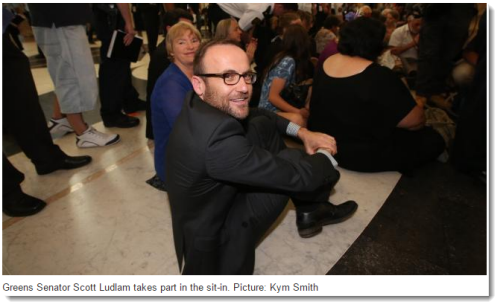 It’s been partially fixed, with Bandt now identified as “Senator Adam Bandt” — except that he’s a member of the House of Representatives. 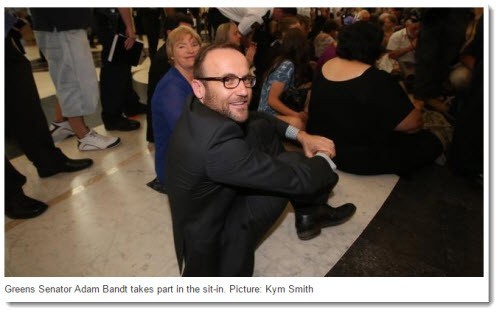 It’s that time again. Speaking of our sexiest pollies, with just a few weeks until the end of the year, we are still accepting nominations for the 2015 Crikeys. Who will take out the esteemed Crikey award for Person of the Year? Who will walk away with the much more competitive title of Arsehat of the year? And who are the sexiest Australian pollies? (Sorry we can’t vote for Justin Trudeau, Ms Tips already asked.) Let us know your picks for the shortlist here.

No contest, who would you rather have taking kids out of concentration camps for a day excursion, nuns or Serco which, we are assured “ would offer excursions to asylum seekers in “a safe and controlled manner”“?

What a great country, gaoling children for the criminal offence of seeking asylum, AND punishing nuns for showing the little ones compassion.