Remembering Chris Mitchell. And other media tidbits of the day.

Men of letters. We should have suspected Chris Mitchell was retiring this week when Errol Simper used his Monday media column to sing his editor’s praises. And perhaps our suspicions should have been confirmed by this letter by none other than Col Allen in yesterday’s paper, agreeing with Simper’s overall assessment but saying the scribe had underestimated Frank Devine … 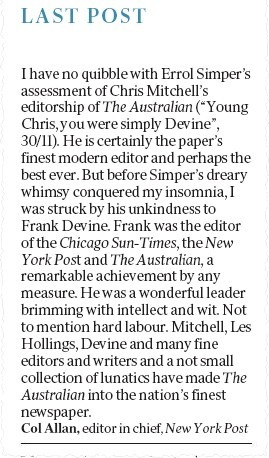 Speaking of letters, Crikey founder and general rabble-rouser Stephen Mayne has been been holding the Herald Sun to task, or trying to, sending this letter in this morning:

“As a News Corp shareholder, it is disappointing to read continuing sniping at all things related to action on climate change in media outlets controlled by Rupert Murdoch, such as the Herald Sun.

“Yesterday’s editorial tried to run a cost argument against City of Melbourne because ratepayers are spending $31,000 sending 3 representatives to the all-important Paris conference.

“Cities are vital players in mitigating climate risk and City of Melbourne’s suite of policies have been recognised globally. We should be there, along with hundreds of other popularly elected community representatives.

“If you are really want to talk about waste, what about the nearly $1 billion in salaries and bonuses, measured in 2015 dollars, that members of the Murdoch family have taken from  public companies over the past 25 years.”

Twenty minutes later he got this reply from Hun editor Damon Johnston.

Stick this letter in your tin foil hat, alongside the last one you sent me a few months ago.

Cost-cutters draw ruler over social pages. The social pages of Melbourne’s newspapers appear to have caught the attention of those charged with trimming costs.

Crikey understands The Age will, from next year, scrap the Sunday Age social pages run by Mik Grigg. It comes some months after the Herald Sun did the same to its Sunday social pages.

The social pages used to be vital to PR companies who’d love getting their clients in as a way to impress. But the photos have never translated all that well online for newspapers, particularly because of online platforms like Instagram, where lifestyle bloggers rule the roost and do the job just as well (if not better).

While we’re on the topic of gossip pages, it’s worth noting Amanda Meade’s report yesterday that legendary Sydney gossip queen Ros Reines has taken a redundancy from the Daily Tele after 18 years. — Myriam Robin

Saving Radio Adelaide. A public petition has been launched to save the country’s first community radio station, Radio Adelaide, after the University of Adelaide, its owner and major funder (it pays around half of its costs), issued a discussion paper that suggested the station should perhaps become self-funding in the very near future.

The station, which used to be known as 5UV, first began to suspect something was up when the university announced plans in November to sell the building it is housed in. At that time, the intention was to relocate the radio station, but insiders suspect the university realised this would be more expensive than first realised.

The university then commissioned a very quick review, conducted by community radio experts Kath Letch (3RRR) and Ann Tonks (6UVS). That review recommended five options, moving from keeping the station as is to transferring its ownership to halting its funding to shutting it down. Keeping the station as is is estimated to have a net nominal cost of $4.1 million over five years, and the university, in a draft discussion paper, says this does “not meet the University’s requirements under its 5-year financial plan for margin improvement in all its operations”. Shutting the station down is far, far cheaper …

Other options included transferring the station to a new entity over five years, or transferring it to a new owner by June next year. The university, in a call for comment from stakeholders, has asked for feedback on both these two proposals.

The way the university has been speaking has led many to fear it’s keen to quickly stop funding the station. “I think everyone at the station knows that the whole university is working under significant financial constraints and all our faculties and schools are being asked to trim their sails,” Adelaide Uni vice-chancellor Warren Bebbington told the ABC. “We can’t have any part of our operation exempt from that so I think they all know that some kind of economies are coming.”

Radio Adelaide general manager Deborah Welch told ripitup.com.au that the possibility of shutting the station down had totally blindsided her and the station’s management. “The process was outlined to us clearly, the review handed down in November and the University knew it had a short time frame to make a decision because we had very little time to move.”

“We knew all those options were under consideration, but there wasn’t any sense or indication that closing down was a viable or genuine one.”

Cutting off support for the station immediately, station insiders believe, would be a death sentence. The station was founded in 1972. — Myriam Robin (disclaimer: the author hosted a show on Radio Adelaide in 2010)

Die redundancies. Prestigious weekly German news magazine Der Spiegel the week announced it was going to drop 20% of its staff (more than 140 people) and introduce a paywall. It sells around 870,000 copies a week and is one of the most influential publications in Europe, ranking with The Economist in London (which calls itself a newspaper). At the moment most of the magazine’s content is free on the website, although longer stories can be downloaded for a one-off fee.

According to Reuters, that is changing and a paywall is to be erected. The Hamburg-based publisher Spiegel-Verlag, which is part of the Spiegel group, said in a statement that it was aiming to cut its annual costs for materials and staff by about 16 million euros (around A$18 million) by the end of 2017, meaning 140 to 150 jobs will be cut.

The German print sector is the largest in Europe, and one of the weakest financially — it is dominated by the Springer group and its collection of papers, websites (Bild is the biggest-selling paper). But papers are under pressure; the German edition of the Financial Times closed in 2012 because of falling sales, revenues and rising costs. — Glenn Dyer

This ain’t over. The Australian Jewish News urges the ABC to appoint a managing director who will “stand up to the bias and lack of balance that characterises much of the broadcaster’s reporting on Israel”. 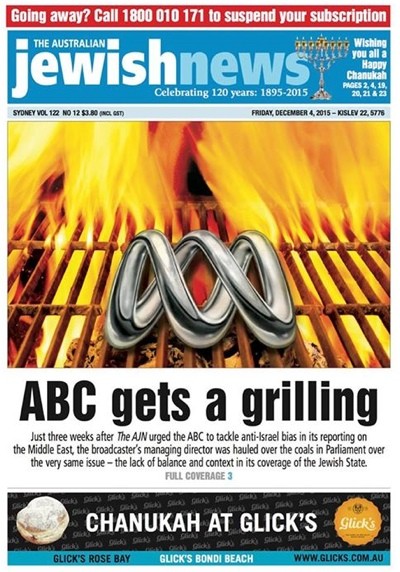 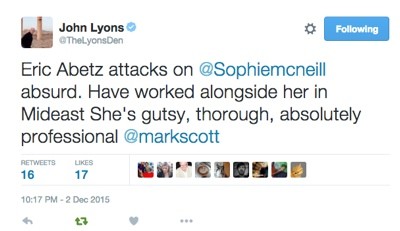 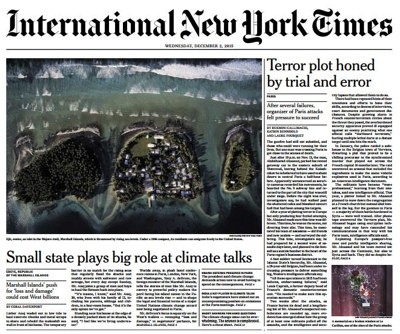 About Rupert’s denialism… In fourteen European countries it is illegal to deny the Holocaust of the 1940s. Those laws try to make sure that the Holocaust in their past will never happen again in their future. In many other countries, including our own, there are less explicit measures that hinder denial.

The highest authorities in climate science have been trying to warn us of major threats to global populations unless we act. In effect, we would be acting to avert sporadic holocausts in our own future.

Other than explicitly prohibiting the denial of AGW, we Australians must have some legal mechanisms to keep the media from condoning evil. Isn’t it a crime to encourage people to commit crimes against the commons?

RogC – whereas it would not be a crime against generations a hundred centuries hence to leave the planet dotted with your beloved nuke shitpiles.

AR would have us continue dumping ten tonnes of carbon dioxide per person per year into the air we breathe and the greenhouse over our heads. As you say, a whole lotta shit’s gonna happen.

Decorating it with windmills isn’t going to reduce that number much. Using non-chemical energy, electricity generation would instead create one gram of fission products per person per year, easily buried deep underground.

Which is the crime against the commons?

Dodger – “one gram of fission products per person per year, easily buried deep underground. Which is the crime against the commons?”
..gee, that’s a tough one, I’ll go for 7,000 tonnes per year of fissionable waste, not yer common-or-garden-contaminated “low level” krap.
Do I get the Kewpie Doll?

AR, that is silly Cold War nonsense from our past. In contrast, global warming is a very real threat to our future. Meanwhile, Rupert is making a buck preying on people’s wish to believe it is not real.