Shadow treasurer Chris Bowen has accused the Greens of being the "tax transparency traitors" in agreeing to the "dodgy deal" at the last minute.

The Greens have sealed a deal with the government to ensure former treasurer Joe Hockey’s final piece of legislation on taxing multinationals passes through the Senate before the end of 2016, and Labor isn’t happy about it.

The legislation, announced the day after the leadership spill but before Hockey was deposed as treasurer, is aimed at forcing multinational companies to pay taxes on profits in Australia. It was the second time the legislation reached the Senate after the Coalition in the House of Representatives voted down amendments passed in the Senate that would have forced private companies with revenues of over $100 million to report their tax in Australia.

Earlier this year the government removed the reporting requirement after some privately held businesses made the bizarre and unproven claim that transparency increased a kidnapping risk for owners and their families.

This week Labor was again pushing for the disclosure amendments to be introduced, and for the ASIC grandfathered list of companies exempt from disclosing to be repealed, but the government wasn’t budging.

In a surprise move overnight, the Coalition sealed a deal with the Greens to pass the legislation without the need for Labor’s support in the Senate, with a compromise on tax transparency. Companies with revenues over $200 million will now be required to disclose their tax information. Additionally, multinational corporations with global revenues of $1 billion or more will now need to prepare general purpose financial statements with more information on their local finances.

Greens leader Richard Di Natale says the compromise means about 281 Australian companies that were not required to disclose their tax information will now be required to report that information to the public:

“This is a huge win for tax transparency. If we hadn’t got this bill passed today, multinational companies would have enjoyed another full year of not having to disclose their tax on a country-by-country basis. We had a choice to either criticise from the sidelines and let multinational tax avoiders off the hook, or pass laws that force much greater tax transparency. The Greens chose action.”

The deal has blindsided Labor on an issue the party had long fought over. During a turbulent Senate session many Labor senators shouted at Coalition and Greens members for teaming up to pass the legislation.

Labor leader in the Senate Penny Wong accused the Greens of abandoning their principles in backing the Coalition to be part of the political game:

“This is the new Australian Greens. The Greens are establishing a track record in this place as the party of dirty deals done dirt cheap. They pretend to their voters that they’re going to come here and fight for ordinary Australians, but you know what? They fold.”

Outside the Senate, shadow treasurer Chris Bowen accused the Greens of being the “tax transparency traitors” in agreeing to the “dodgy deal” at the last minute. Shadow assistant treasurer Andrew Leigh estimates that 600 companies that would have had to report under the $100 million threshold will no longer have to report their taxation information.

Greens finance spokesperson Peter Whish-Wilson said the Greens would still push for the grandfathered ASIC list to be scrapped, and would push for the remaining companies not disclosing their taxation information to explain to Parliament why they should avoid tax transparency.

Meanwhile, the Greens, foreseeing potential backlash among their supporters, have asked their followers to share on social media an infographic that conveys little actual information: 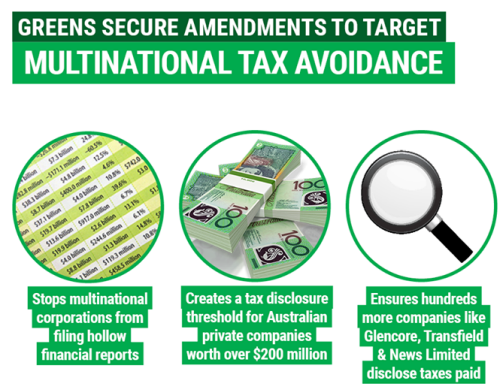 Treasurer Scott Morrison today also introduced new legislation to implement OECD’s Common Reporting Standard for the automatic exchange of financial account information and help the Australian Taxation Office locate funds and investments hidden offshore. He also introduced the first legislative response to the Harper review, which will ban credit card surcharge fees where those fees are in excess of the cost to the company for accepting credit card payment. Companies will be fined up to $108,000 for excessive surcharging.

Thing about deals, is they represent only as small part of policy of either party. The Greens compromise win only looks bad when you compare it to what would happen in a double-majority left-wing parliament. If the Greens had a double-majority, Labor’s policy would look like a joke.

Agreements are compromise, and this agreement means 281 companies are cracked down on as opposed to none of them. Now begins the fight to extend this achievement.

And PhoenixGreen…your comment doesn’t even make sense.
The Greens are unlikely to have a majority of any sort, let alone a ‘double’ one!
Still I suppose any excuse for their outrageous behaviour is better than admitting that they are now clones of the LNP on tax issues!!

Politics has always been about compromise, which is essential if anything is to be accomplished.The end result of this compromise is a hundred per cent advance on what it was previously. Good on the Greens for putting common sense before ideology. Now we can concentrate on the next step.

Agree that the new multinational company offshore tax law is not comprehensive enought but at least there is something in place for Labor and the Greens to work with in future.

It is a pity that Greens were not so pragmatic with regard to the ETS. If the Greens had supported Labor and Turnbull’s ETS at the time, Australian would have had a system in place to work with. Now, we still have nothing, not to mention two Labor PM’s who lost their jobs over it.