But the legislation has sparked debate about freedom of speech versus the freedom of women to access abortions without harassment. And in the United States last year, the Supreme Court deemed similar laws unconstitutional.

What does the Victorian legislation do?

For the last 20 years the Helpers of God’s Precious Infants have had a presence outside Melbourne’s Fertility Control Clinic in East Melbourne. But from January next year it will be illegal for them or any protesters to come within 150 metres of abortion clinics. The new legislation also prohibits the filming of people entering a clinic. Penalties for infringing these restrictions are set to result in heavy fines or jail time.

The legislation was introduced by Sex Party MP Fiona Patten after the clinic lost its case in the Supreme Court against the City of Melbourne in August. The clinic accused the council of not fulfilling its duty to remedy, as far as is reasonably possible, all nuisances existing in its municipal district. The clinic argued the protesters were a nuisance and a threat to public health.

What do the anti-abortion protesters want?

In Right to Life’s “10 reasons to oppose Victoria’s abortion clinic buffer zone”, it claims the new legislation is based on “a heap of lies”. The group says the East Melbourne Clinic is worried about loss of revenue, not the safety of its staff or patients.

How are anti-abortion activists connected to groups in the US? Is there a similar history of violence against abortion clinics here in Australia?

So far there have been two incidents of violence against abortion clinics in Australia. The most horrific case was in 2001, when a security guard was shot dead at the East Melbourne Clinic and the gunmen attempted to take the rest of the clinic hostage. The second was in 2009 when a Molotov cocktail was thrown at a medical clinic in Mosman Park, Western Australia. “Baby killers” was spray-painted on the side of the clinic, which didn’t actually provide abortions.

While the gunman at a Planned Parenthood in Colorado Springs over the weekend hasn’t been confirmed as an anti-abortion terrorist, the attack does raise issues about the safety of clinics in the US, where violence against abortion providers is common.

The US National Abortion Federation says that since the enactment of safe access zones in the US, clinic blockades have dwindled to their lowest levels and violence against abortion providers and their patients has also decreased.

Why was similar US legislation deemed unconstitutional? Could a similar court case overturn the Victorian legislation?

In 2014 the US Supreme Court deemed a law allowing buffer zones outside abortion clinics in Massachusetts to be unconstitutional. But if a case were to be taken to the High Court here, the Victorian legislation is unlikely to be struck down as our right to freedom of speech differs significantly from the US.

The Victorian Charter of Human Rights does outline freedom of speech and is used as a guideline for legislation in Victoria. But research by the Victorian Parliament says the safe access zone legislation is considered to fall within s15(3), which allows for limitations of freedom of expression where they are reasonably necessary to “respect the rights and reputations of other persons” or “for the protection of national security, public order, public health or public morality”.

Victoria’s abortion laws are already seen as more progressive than other states — what are the differences?

Victoria is already seen as having the most progressive laws surrounding a woman’s right to obtain an abortion. In 2008 abortion was decriminalised and became legally available at up to 24 weeks’ gestation without a doctor’s referral.

In 2013 Tasmania followed suit, decriminalising abortion and providing safe access zones within 150 metres of an abortion clinic. In 2002 the ACT decriminalised abortion and has now included a similar clause that allows for women to “access the health facilities in privacy, and free from intimidating conduct”.

But in Queensland, New South Wales, Western Australia and South Australia, abortion remains more difficult to obtain and is still a criminal offence to varying degrees.

Regardless of the government, the poor are the easiest to rob 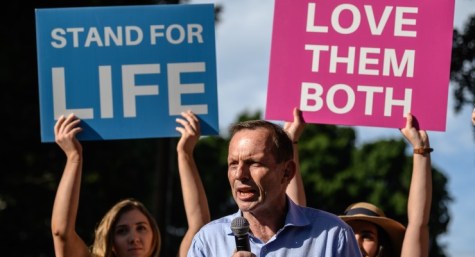 You failed to mention the Northern Territory where not only is abortion not easy to obtain but so also is RU486.

Having been someone who was involved in two early pregnancy terminations I can only express what is a personal opinion. The events leading up to it and the reasons why and the emotional aftermath can never be fully explained in just a few lines on a commentary forum.

Even though I was much younger at the time it was n’t until many years after the events that I began an inner reflection which eventually spiraled me into depression and sickness. That depression lasted nearly three years and even today it often reappears under various guises.

Was I refusing to take responsibility for my own actions? Did I terminate a life? a soul? a person? due to my own selfishness and unpreparedness to take the hard yards for something other than myself?

There are a lot of different reasons why people consider abortion and none of those reasons are ever cut and dry or straight forward. Everyone has to make their own minds about this issue and it is truly a personal decision, but looking back with a seared conscience and if I had that time again I definitley would n’t do it. I would take those hard yards and what ever the consequences.

I sometimes wonder how religious people would feel if every Sunday morning as they tried to walk into church, someone was standing there, blocking their way and shoving pamphlets about pedophile priests in their faces and telling them that what they were about to do was pure evil. I’m pretty sure there wouldn’t be too much turning the other cheek.

When, and HOW, did JoshT go from ‘intern’ to ‘gun reporter’ (Crikey’s own term) when he is (over) stretched to write grammatical English?
Is Jess about the follow the same, risen without trace, path?
Or are all the real writers already off for the Great Oz Somnolence, leaving just the kiddies to play?

The Victorian government has got it right. The US Supreme court has allowed a too wide interpretation of freedom of speech simply because it is written in their constitution and the balance of views on the Supreme Court today is to the right. People should be free to make their choice in their circumstances with as much support as possible. This will not prevent their taking a different view in retrospect. That is what we all must face with respect to many life making or breaking decisions.It is getting especially hard in this world where people are surrounded by many others who look out only for themselves and confront the rest of us with deception and fraud.