‘Halal food should be labelled’ – Voltaire. Cory Bernardi’s inquiry into halal that wasn’t at all just about halal surprisingly came out with mostly recommendations about what to do about halal. The committee’s report released yesterday said food manufacturers should label products that have received “third party certification”, and said the government should monitor halal certification.

Bernardi, fresh from deleting all his tweets after accidentally quoting a neo-Nazi and man convicted of possessing child abuse material as Voltaire, had his own comments for the report, too, complaining about people opposed to buying halal food being labelled as racist or bigoted, and criticising some halal certifiers for not appearing before the committee. Also despite the Australian Crime Commission stating there was no evidence of direct links between halal certification and terrorism funding, Bernardi said it was “logical to conclude that funding from halal certification could be directed to Islamic charities and objectives”, and claimed AUSTRAC had suggested there is a high risk for charities to be used as channels for terrorism funding.

Snouts in the trough. Biscuit company Arnott’s was in Parliament House today with a cardboard truck full of Scotch Fingers and Tim Tams and a stall to create one’s own flavour of biscuit. The event wasn’t to make sure that pollies had their fill of biscuits while Coles works through its “dangerously low” shortage of Tim Tams, but to mark 150 years of the company’s existence. Member for Fairfax Clive Palmer has already tweeted his enthusiasm for Arnott’s, saying “I love an #Arnotts biscuit”. One tipster says “people in Parliament have made pigs of themselves,” with some walking away with armfuls of biscuits. The staff member couldn’t restock the Tim Tams fast enough for our pollies, who must have got the memo that Coles would be stocking Tim Tams again — because they’d agreed to raise their prices.

A history lesson. When was the Communist Party banned in Australia? In 1951, according to Jennifer Oriel in today’s Australian. Oriel calls on Prime Minister Malcolm Turnbull to take a leaf out of Menzies’ book when it comes to fighting Islamic State, referring to national security bill introduced after World War II and Menzies’ fight against communism: 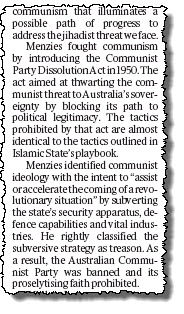 No Canberra games here. While question time has been devoted to continual questioning of Mal Brough, many MPs have passed the time writing Christmas cards to their supporters and constituents. The Labor Herald has named Andrew Leigh’s the cutest card of the year — with the youngest in the family extremely unimpressed with this whole official photo-taking business: 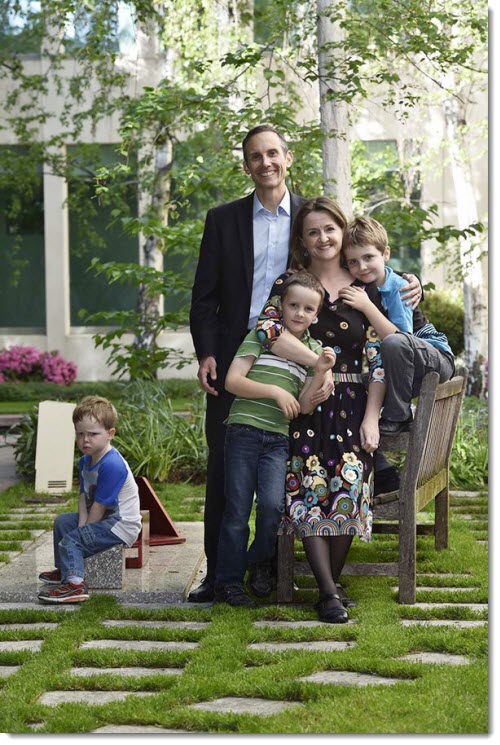 One small step, a giant leap. Non-binary gender neutral identifiers are on the rise this week. The New York Times has added the gender neutral honorific “Mx” to its repertoire along with Ms and Mr. Pronounced “mix”, the Times used the honorific in a recent article about Bluestockings, a collectively owned and radical bookstore.

“‘Are we anarchist?’ Senia Hardwick asked. ‘Technically, yes.’ Mx. Hardwick, 27, who prefers not to be assigned a gender — and also insists on the gender-neutral Mx. in place of Ms. or Mr. — is a staff member at Bluestockings, a bookshop and activist center at 172 Allen Street on the Lower East Side.”

This is a turn-around for the Times, whose standards editor Phillip B. Corbett said last June it was unlikely to be adopted because the term was too unfamiliar.

It comes as The Washington Post has allowed for the singular use of “they” to refer to someone who doesn’t identify as a “he” or “she”. This will eliminate the need to somersault around avoiding pronouns, when a person doesn’t want to be identified as male or female. The use of “they” has been under dispute for years, but with the acknowledgement that gender-neutral terminology is needed it’s becoming increasingly popular. Despite resistance from die-hard linguists.

Sent to the cleaners. Senator Jacqui Lambie was working late last night, and used the opportunity to tweet her support for the Parliament House cleaners, who are still negotiating for a pay rise. As part of the industrial action, MPs and senators were supplied with cleaning supplies — so they could do the dirty work themselves. Lambie tweeted this photo, which does make us worry — it’s probably not a good idea to clean the toilet and the shower at the same time. 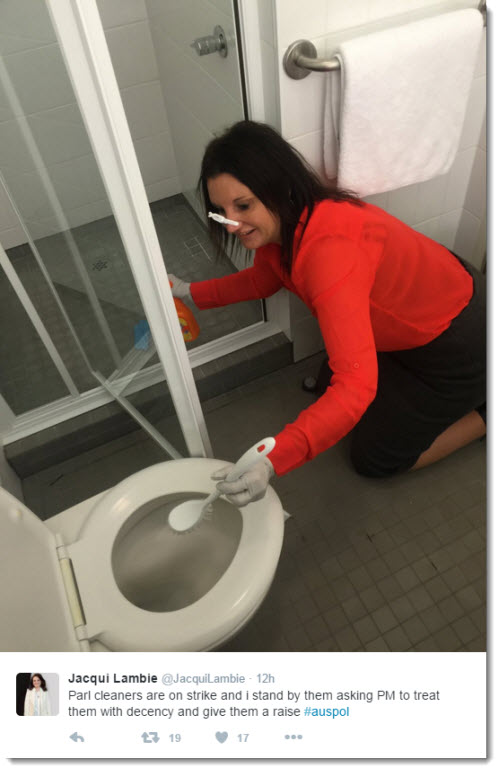 Rundle: why Jews (and everyone) need to stand up for halal

So, is Bernardi going to get his left ear removed for the right side of his head?
Then he can see more – because he can wear glasses.

And it’s a good idea to not use your toothbrush.

Love the Christmas card – I can see that picture being bought out at his 21st.

If only the Government was as keen to highlight the nutritional aspects of our food as it was the religious ones.