Outsourcing, croc battles ... and other media tidbits of the day.

You don’t say. Fairfax has a very interestingly timed op-ed this morning from Age columnist and political science associate professor Sally Young about the ethical case for publishing details of politicians’ affairs. She makes the case that perhaps respect for a politician’s privacy might go too far, and that perhaps the public does have the right to know about extramarital dalliances. Says Young:

“Allegations of affairs are just that — allegations. They might not be true. The nature of a relationship is difficult to know unless the participants disclose it themselves. Without evidence — which Australian journalists have generally been unwilling to seek out in the zealous British manner — journalists have to make decisions about what can be verified and which private matters the public needs to know about …

“In Australia, there are historical, cultural and legal dimensions to media reporting that have meant private matters have been exposed only if they involve public issues. Is this coyness a good thing for democracy? Defenders regard it as journalists being high-minded – and broad-minded – respecting privacy rather than being puritanical or salacious. Every case is different, but sometimes the coyness seems to be a form of censorship, a sign of a media that is too close to its subjects, and too much of a boys’ club with a ‘footy trip’ approach. “

Why is Fairfax publishing such a sentiment this week, of all weeks?

Driven to outsource. Fairfax has entered into a new venture combining drive.com.au with themotorreport.com.au. Fairfax will license the Drive brand and drive.com.au to 112, which owns and operates themotorreport.com.au. And while the joint venture is no doubt intended to give Fairfax a foothold in the lucrative online classifies market in automotives, one aspect of the deal — the licensing of the Drive brand to an outside company with its content no longer produced in-house — has staff very concerned.

Journos will hold stop-works in Melbourne and Sydney today to discuss what one staffer called an “incredibly dangerous precedent”. Fairfax’s union house committees told journalists this morning that six staff will be made involuntarily redundant as part of the venture.

The release, while merely saying the Drive sections of the paper will now be supplied by the new joint venture, says the 50:50 venture will focus on the new car market. Former CEO of Carsales Shane Pettiona is heading the initiative. Pettiona is quoted as saying:

“This joint venture with Fairfax Media, in strengthening the editorial power and reach of Drive.com.au, as well as strengthening themotorreport.com.au, and in leveraging the commercial synergies across both sites, makes the JV among Australia’s most potent and largest automotive editorial and new car buyer destinations.”

Rattling Rupert’s Bones. Bones stars Emily Deschanel and David Boreanaz, have joined author Kath Reichs and show EP Barry Josephson in starting legal action against the Murdoch clan’s 21st Century Fox, Fox Entertainment Group, 20th Century Fox Film Corporation and Fox Broadcasting Company, claiming Fox cheated them out of tens of millions of dollars in profits from the series, which is Fox’s most successful ever. Deschanel and Boreanaz play the two leads in the Fox TV hit, now in its 11th season. The show is loosely based on the writings of forensic anthropologist Reichs. According to the lawsuit, she was promised a 5% share of profits for her rights, while Deschanel and Boreanaz were promised 3% each. Variety reports that the duo have claimed that as the series became more profitable for Fox, accounting statements “counter-intuitively” showed the plaintiffs getting farther away from profitability. The plaintiffs claimed in the filing in a LA court on Monday that 20th Century Fox Television “has engaged in a systematic and pervasive effort to cheat” them out of profits from the drama.

The lawsuit claims that in 2010, shortly after the final episode of series five, Reichs received a statement showing that she was almost US$90 million away from receiving profit payments, while Borneanaz and Deschanel were nearly US$100 million away from profits. They then sought an audit of the studio’s books.

“The documents that 20th TV did provide confirmed Plaintiffs’ suspicions and showed that they were being cheated out of more than $100 million in gross revenues and being overcharged many additional millions of dollars in alleged expenses,” the complaint adds of the plaintiffs’ fight to get a look at true accounting of Bones after not getting anything in profits for several seasons, according to a report on deadline.com. — Glenn Dyer

Front page of the day. Look out, NT News — far north Queensland is out to prove it has the wildest crocs. 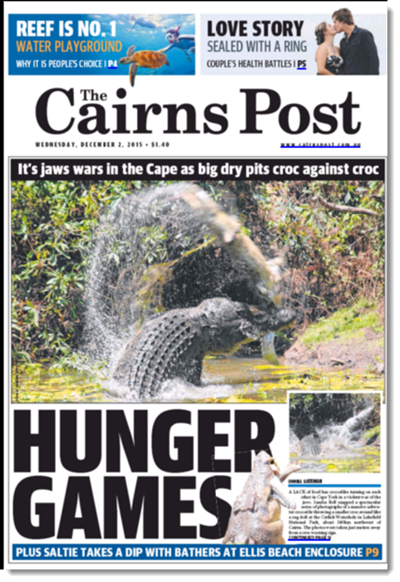 Kathy Reichs should have realised that film (and TV) producers never produce a profit, at least not during the actual seasons. They’re like the businessmen who always lose money on every working day, making their profits only on Sunday’s and public holidays when they’re closed.

Surely this is Peak Croc? And Capricornia is the Winner!