Everyone is shaking it off except Abbott.

Prime Minister Malcolm Turnbull is in Paris this week, yesterday telling leaders at climate change talks that Australia would make cuts of between 26-28% by 2030 as part of a global effort to reduce carbon emissions. Turnbull also announced $1 billion over the next five years for the Green Climate Fund to help Pacific Island nations deal with rising sea levels, but faced criticism as it will come out of the existing foreign aid budget. Former PM Tony Abbott, back into second place this week, told Fairfax that if he had died on the day of the (second?) leadership spill, he would have been given an “upbeat assessment” at the “Pearly Gates”, and of course used the last few days to fuel rumours Turnbull and Foreign Minister Julie Bishop were plotting with Treasurer Scott Morrison back in February. Morrison had an adequate response, quoting a year-old Taylor Swift song — or a decade old Mariah Carey song, let’s be honest — and telling everyone to shake it off.

Opposition Leader Bill Shorten remains in third place, with discussions surrounding his pledge to cut emissions by 45% by 2030, which was described by Turnbull as nice in theory but too expensive. Health Minister Sussan Ley opposed Shorten’s call for a rise in the tobacco excise, saying it would disproportionately affect poor people, and announced a shake-up of the mental health system including a specific phone help line and a move towards individualised care packages.

Calls for Special Minister of State Mal Brough to stand aside over his involvement in the Peter Slipper affair continue, after contradictions between Brough’s interview with 60 Minutes and answers to Labor in parliament yesterday, with the interview suggesting he did ask former staffer James Ashby to obtain copies of Slipper’s diary in 2012.

Minister for Industry and Innovation Christopher Pyne is in our index this week after it was revealed the Monkey Pod room was right next to his office, and therefore an inconvenient place for any underground far-right plotting, and Minister for Resources Josh Frydenberg is up 14 places after accusing the Grand Mufti  of Australia of a failure of leadership following the recent international terror attacks. 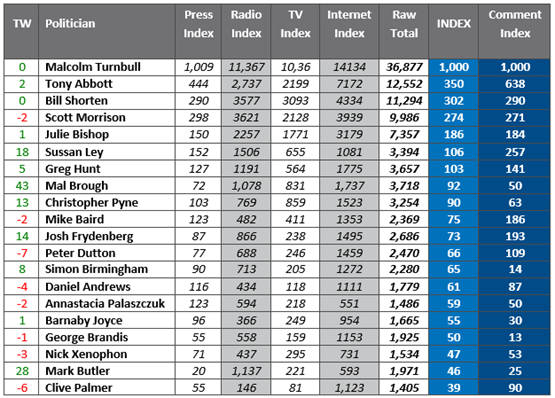 Even lower numbers on social media this week than last, with some wishing the PM would hurry up and eat an onion already, I’m sure.

Talkback callers are still talking about the leadership spill, voicing whether they support Turnbull or Abbott.

I know, second week in a row, but with Morrison and NSW Premier Mike Baird posting selfies of them at T-Swizzle’s concert, I had to.