After a customary grilling, independent Senator Nick Xenophon asked Scott if he was familiar with a British game show called Pointless, currently airing twice a day on ABC1, in the morning and before the news. Scott admitted he wasn’t, so Xenophon relayed the happenings of a recent episode, which had a series of questions on Australian slang, from “bonza to thongs”.

“How do you feel about Australians having to watch English contestants talking about what bonzas and thongs are,” the Senator asked.

“I suspect, Senator, that it’s amusing, but not in the way the makers intended,” Scott responded.  To which Xenophon quipped: “It might just be pointless”.

In 10 years as managing director Scott has never missed an Estimates appearance, he reminded the senators towards the start, as he thanked them for allowing him to reschedule. Several senators tried to offer their farewells, but Scott assured them he’d be back –- his term doesn’t expire till June.

Flying heap of garbage-watch part 4735. It’s been a while since anything fell off an F-35, they were grounded, or we learnt they couldn’t perform basic functions you’d expect of a fighter jet, like fly/shoot/dogfight, etc, but there’s bad news for the very troubled, long-delayed, ludicrously expensive Lockheed aircraft that Australia foolishly signed up to waste billions on. Not merely are the Canadians pulling out, which will make the jets more expensive for us (but hey, what’s another mill per plane?), but the Americans themselves are now thinking that the delays with the plane are so long, and the thing is so expensive, they might just purchase some more existing, proven aircraft instead. According to Aviation Week (paywalled, but more detail here), the USAF is considering seeking bids for F-15s and F-16s by Boeing, which will be considerably cheaper than F-35s, to supplement its fleet. Readers will remember that an F-16 — despite considerable disadvantages — managed to defeat an F-35 in a dogfight earlier this year, sparking a round of “yes well, the F-35 isn’t supposed to dogfight” claims from apologists. Hard to think what the apologists will say if the Americans decide to take some more Boeing planes and cut back on their F-35 purchase. Maybe the F-35 isn’t supposed to be compared price-wise to other planes?

It’s a long way to the top. Yesterday we noted that a number of federal pollies had excitedly broadcast their attendance at the Taylor Swift concert in Sydney over the weekend, but a caller to 6PR in Perth shows they do things a little differently over in the west. According to the caller a state MP was seen at the AC/DC gig in Perth on Sunday night “going feral”, and he didn’t bat an eyelid when a woman exposed her breasts to guitarist Angus Young. We’re guessing he won’t be following the lead of the MPs in Canberra this week by tweeting all about it.

North Sydney gets Ruff. The constiuents of North Sydney will take to the ballot box on Saturday to officially end the tenure of Joe Hockey as their representative in Canberra. There’s a total of 13 candidates, including the Liberals’ Trent Zimmerman, but no candidate from the ALP. A tipster tells us that his mailbox has been full for weeks with the life stories of the candidates, including a “fancy fold out” from Zimmerman including “childhood photos, his first dog, local reminiscences and the usual small business and upgrading sports facilities promises”. Our tipster tells us that Zimmerman has had letters of support from PM Malcolm Turnbull and NSW Treasurer Gladys Berejiklian, among a total of four brochures spruiking the Liberal. According to our tipster’s form guide:

“There’s a Christian Democratic contende — ‘the only True Conservative you can TRUST (their capitals); a voluntary euthanasia party nominee, not surprising given the amount of elderly here; a Liberal Democrat ‘Less Government More Freedom’ (their capitals again) dude who runs a huge self-storage company; a Master of Science from Oxford who was recently deputy mayor (and now a councillor on the North Sydney Council) and who has put Zimmerman down as 13th preference.

“And there’s Dr Stephen Ruff, a senior orthopaedic surgeon at the Royal North Shore hospital, actually endorsed by [popular previous independent member for the seat Ted] Mack. He sent a simple one page letter to that effect. His supporters at the Artarmon rail station (where hundreds upon hundreds of people go to every day) said: ‘he doesn’t need to do this; he’s got a job.'”

Nats in hats. It’s the first day of Summer and Nationals MPs have used the occasion to remind us that they are the sun smart party, with a photo op at Parliament this morning with all the members of the party wearing Akubra hats. It’s quite the sight to see, with a uniform of suits and wide-brimmed hats. Senator Fiona Nash wins best on ground for her bright pink Akubra, which is a thing of beauty. 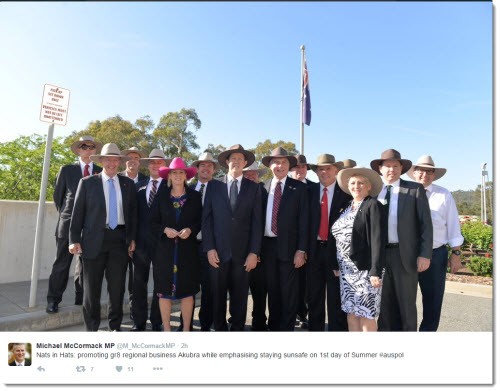 Yawn. Why would the WA MP bother tweeting about breasts being exposed at an AC/DC performance when it’s par for the course.

During his career the brilliant Angus Young has probably had more of such incidents than he has had breakfasts.

While it is indeed a stunning hat Fiona is wearing, that pic is also a pretty sad indictment of gender equality in the Nats.

Why is it worth commenting on when an MP did NOT act like a dill?
Oh, wait… I see..

The US Air Force has denied any plans to purchase another tranche of Lockheed Martin F-16 or Boeing F-15 combat jets following reports it could seek bids for up to 72 new aircraft.

According to comments attributed to a senior US Air Combat Command official at an international fighter conference in London last week, the current Lockheed F-35 procurement plan could prove unaffordable, and another fighter wing of F-15s, F-16s or perhaps even F/A-18s is being considered to supplement the current fleet – which will serve into the 2040s as F-35s are delivered.

The air force is seeking 1,763 F-35As through 2038, and in the interim it intends to modernise and upgrade its F-16s and F-15s with new active electronically scanned array (AESA) radars and electronic warfare systems.

Asked to categorically confirm or deny any new fighter purchase, a spokesman for the service’s acquisition office says: “At this time the air force has no plans to acquire 72 new F-15s or F-16″