On the look out for plebiscite funding. We reported on Friday that the Australian Christian Lobby was recruiting new staff, and a tipster tells us the recruitment at the anti-gay marriage group could be linked to the slated upcoming plebiscite on marriage equality. If a plebiscite on marriage equality is held next year and the government provides funding for both the pro and anti campaigns, the ACL could be in line to receive funding. The ACL’s managing director, Lyle Shelton, told a Senate inquiry on a plebiscite that both camps should receive equal funding from the government in the case of a plebiscite, as were provided to the yes and no cases in the referendum on an Australian republic. If the money was available, a struggle would be on for which group could claim it, says our tipster. “The ACL has always assumed that it would be the chosen organisation to lead the NO case in a plebiscite and it’s hungry for the anti-gay cash to splurge in a nationwide fear-campaign against the the gays,” writes our tipster. The Catholic Church is apparently also keen to be the funded voice of the no campaign, and the Church has already begun its freedom of speech campaign with the case between the Catholic Church and transgender activist Martine Delaney in Tasmania being used as a test case.

The ACL currently runs completely on donations, according to a post on its Facebook page last week. It previously took corporate donations, but says it no longer does. According to the 2014 directors report filed with the Australian Charities and Not for Profits Commission, the ACL received more than $2 million in donations that year, with employee expenses the major outlay of the lobby group. According to the ACNC website, the ACL has 13 full-time and seven part-time staff, and the names of donors are not required to be declared. The 2015 financial year reported is yet to be uploaded.

Watch your language. The Asylum Seeker Resource Centre has released to its supporters a new guide on how to speak about asylum seekers, or “people seeking asylum”, as the new guide suggests. Titled “Refuge from Our Rhetoric”, the document focuses on “persuadables” — people who are undecided about accepting asylum seekers. It tells readers to “get comfortable alienating your opposition — energise your base and persuade the middle”.

The Oz losing subs. We hear from a tipster that the redundancies at The Australian, and especially the closure of Climate Spectator, have made a dent in the number of subscribers to the national broadsheet. A tipster tells us that he rang to cancel his subscription, telling the operator that it was because Climate Spectator had been canned. “The girl on the line said they had had a lot of cancellations in the last couple of days for the same reason,” our source tells us. Has the loss of Climate Spec had an impact on the Oz‘s readership numbers?

A blank space, baby. It was the hottest ticket in Sydney on Saturday night, and among the 76,000 mostly teenage girls living out their wildest dreams, politicians, union moguls and media stalwarts proved Taylor Swift has broad appeal. Mike Baird and Scott Morrison, feeling like they were 22, took to social media during Saturday night’s Sydney concert to prove that they were on Dad Duties, while former ACTU boss Paul Howes went with his bestie Michael Stutchbury. Baird accompanied his daughters as an “excuse” to attend the concert. 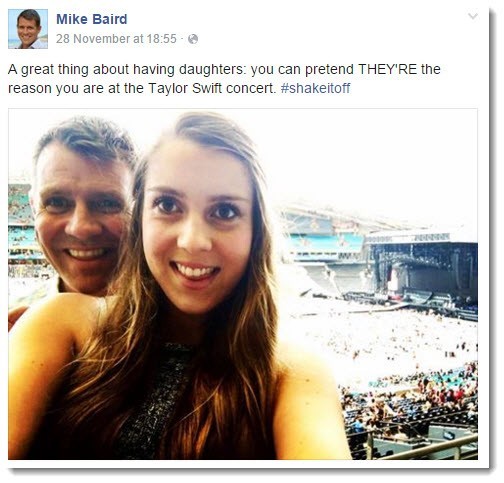 Morrison managed to work in a reference to true pop queen Tina Arena, used the concert to further his campaign to make himself a “man of the people”. 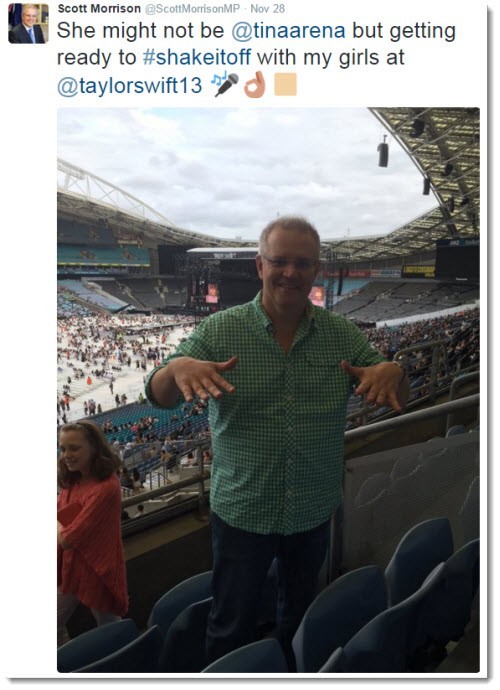 Paul Howes looked like trouble when he walked in, tweeting this selfie with the AFR’s Michael Stutchbury, who seemed to be attempting to attend the concert inognito. 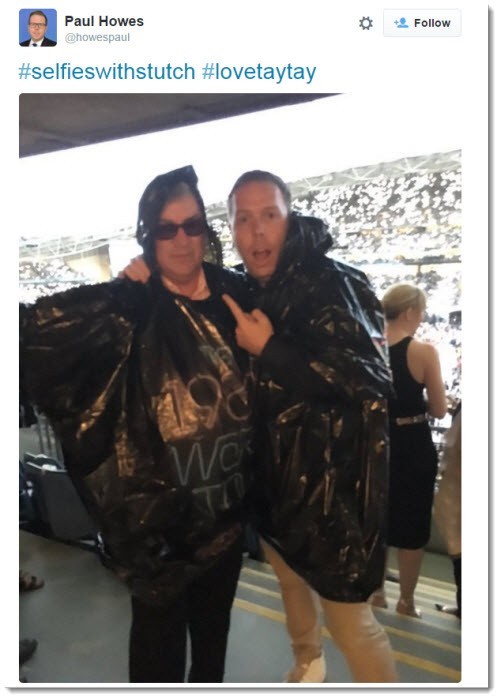 The T-Swift love continued thick and fast at Parliament house this morning, with Sam Dastyari accusing the Liberals of having “bad blood” and pulling a “Swifty”. Morrison responded in a similar fashion to the Fairfax leadership plot reports with “you should shake it off”. Swift has six more shows around Australia in the next fortnight, and is known for inviting her famous friends on stage during her world tour — are these pollies just angling to be part of her squad?

The Oz v SBS. Media Diary in The Australian this morning gleefully outed the SBS comedy writer behind the controversial piece that satirised News Corp journos who had been made redundant. The piece “Fired News Corp Journalists Now Free To Pursue Jobs As Actual Journalists” caused offence among journos who thought it was bad taste to make fun of people losing their jobs. Pieces on The Backburner run unbylined, but Darren Davidson and his fellow diarists traced the piece back to freelancer Ben McLeay, also quoting from fiction on his Tumblr page. McLeay, who tweets under the name Thomas Violence, was unperturbed by the outing this morning:

Tips and rumours: ACL on the look out for plebiscite funding.

When Brandis met the ACL on gay marriage: our FOI denied

Scrott Morrison :- I’ll be opening a can of baked beans tonight, wanna come around for that?

NOT SATIRE – I have no sympathy whatsoever for any mudorc “journalist” being sacked – they kissed the Scum King’s Ring so now they reap the shit storm of the reality they helped create.