The Daily Advertiser is let off the hook for its factually preposterous anti-gay marriage screed. Plus other media tidbits of the day.

Daily Advertiser‘s Press Council adjudication. An opinion piece in Wagga Wagga’s Daily Advertiser that said gay marriage would spread AIDS and HIV through encouraging homosexuality didn’t breach the Press Council’s standards on causing offence, an adjudication published on Sunday said, as the publication “clearly treated the overall material as part of a long-running series of articles including a broad range of views”. The publication, the Press Council noted, had published a number of responses to the two anti-gay-marriage columns it ran. “The Council concludes that the articles were not so offensive as to outweigh the public interest in allowing robust expressions of opinion on issues of national debate.”

The two pieces examined by the APC included one by Daily Advertiser columnist Keith Wheeler that had drawn a sharp response from readers around the country after it was shared on Twitter. It contained the claim that “AIDS and HIV are at a 20-year high”, which, as Crikey has previously written, isn’t true.

The paper had previously stood by Wheeler’s right to express his opinion. In an editorial it stated: “Yes, some people may say some things that others find unbelievable but we all have to agree that the fact we can have such open discussion is worth having.” — Myriam Robin

Short leash for 84-year-old mogul? Is Rupert Murdoch no longer relevant at News Corp, even though he and the kids control the joint? He was nowhere to be seen last week at the NRL deal with Fox Sports/News and Foxtel, even though he fronted up to the AFL broadcast deal in August. He seems to be spending more time on Twitter than on any other activity. Now he’s become a media tipster, rather than media mover and shaker. According to a tweet on Friday night, Murdoch broadcast to his followers that he had had “strong word” that the Tribune Publishing Co (a smaller rival to News in the US and owners of the Chicago Tribune and the LA Times) was about to be bought by a “Wall Street firm”, with the Times being in turn bought by LA billionaire Eli Broad. Murdoch said in the tweet that he had not bid and had no interest in the deal. Tribune Co shares closed at US$9.29 on Friday, down nearly 25% from US$12.24 at the end of August, and down nearly 50% for the year so.

At US$9.29 a share, Tribune is valued at just US$244 million — a bit of a steal. But no, even that is probably too much these days of dying dead tree media. Like News, Tribune was unwanted by a TV/video content parent and spun off. Unlike News, though, it didn’t have any other assets. (News has online real estate in Australia, the US and now Asia, and pay TV in Australia). There were persistent rumours a few weeks that Murdoch wanted to buy Tribune Co. Did the rest of the board demur? — Glenn Dyer

Ten’s Foxtel share issue story and battle to survive was the best soap opera of the year now that Home and Away is on the slide in metro markets, giving Seven a major repair job in 2016. Over the year, Seven won metro “total people”, and Nine won the major demos: 16 to 39, 18 to 49 and 25 to 54. Ten, of course, staged a rebound and enjoyed the biggest rise in share and audience numbers than the other networks. In the regionals it was Seven, easily winning “total people” and the major demos. — Glenn Dyer

And the winners are … NRL, AFL, My Kitchen Rules and The Block dragged in viewers by the millions, especially for the various grand finals. In my opinion, the Peter Allen biopic was the best local drama. News Breakfast and Insiders were the best local news and current affairs programs (Offsiders was the best sports chat program and deserved an hour every now and then). Nine’s broadcast of the pink-ball test this past weekend was the best sports program this year, and the result went close to equalling the breathtaking finish to the NRL grand final and that camera work from the Nine Network camera operator to capture the incredible flick pass to the Cowboys winger who scored untouched in the 80th minute — whew!

Q&A deserves a very honourable mention. Sarah Ferguson deserves a big tick for her Hitting Home two-parter last week. Laurie Oakes on Nine (and in the Weekend Tele in Sydney) and Mark Riley on Seven and Barrie Cassidy on Insiders stood out. Michael Rowland and Virginia Trioli really clicked this year. Karl Stefanovic did himself no favours with The Verdict (nor did Mark Latham).

Restaurant Revolution was the Dud of the Year — thanks, Seven. The Bachelor was gazumped by The Bachelorette, but I’m A Celebrity at the start of the year was Ten’s saviour because it showed viewers and advertisers that the Network’s bosses were able to make sensible programming decisions instead of what the chairman/shareholder/director called Murdoch thought the viewing public wanted.

Shaun Micallef was missed in the second half of the year — Charlie Pickering improved, but he is not unique, unlike Micallef. Gallipoli on Nine didn’t work and the events, and coverage around the big day on April 25 had the strong hint of being “sexed up: to suit someone’s agenda and not the country’s. Seven’s wrong turn on A Place To Call Home was exposed in the middle of the year with the network left without a solid drama to carry its schedule until the year’s hit, 800 Words, started. — Glenn Dyer

And as for 2016 … A further slide in the appeal for viewers from the so-called reality programs is why Seven and Nine, in particular, have boosted spending on dramas, looked for comedy and will probably increase their spending on news and current affairs — 2016 being an election year. Will Seven bring back Today Tonight, or a clone? Certainly The Chase Australia, especially at 5.30pm, has affected news ratings, with Seven now ascendant and Nine in the reactive position. And what will happen to Eddie McGuire? His program is now in the hot seat. — Glenn Dyer

Front page of the day. This’ll be fun … 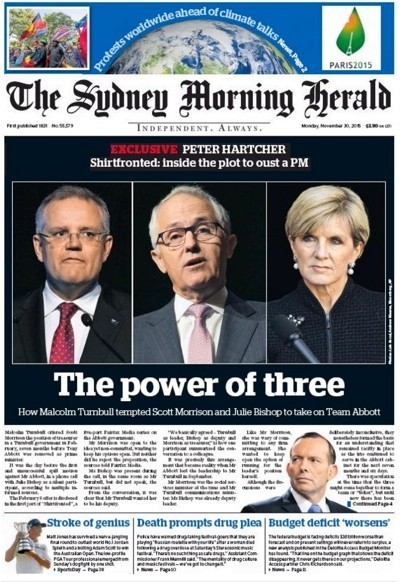 The only puzzle was why it took them so long to ditch the arsehole.