Do you love Jesus and administration? Have we got a job for you ... war profiteering ... imagine a world where religious organisations pay their damn taxes ...

War, what is it good for? Demonstrating that terrorism can be good for business, the share prices of the United States’ biggest weapons manufacturers all surged in the wake of the Paris massacres. Lockheed Martin rose over 3% when markets reopened on the Monday after the attacks, and topped 6% this week. In comparison the Nasdaq, the Dow Jones and the S&P500 have all risen around 3.5%. Northrop Grumman has risen 5%, while Raytheon is up nearly 7%. All are up over 30% — Northrop a massive 50% — since the US launched its air operations against Islamic State in 2014, compared to a 17% rise in the Nasdaq. Not that French companies have missed out — Gallic arms giant Thales has also risen 6% since the Paris attacks.

A fresh start. The Australian Christian Lobby is hiring, a tipster has informed us, with three full-time jobs added to the website yesterday. The ACL, which focuses its efforts almost exclusively on issues surrounding same-sex marriage, tells prospective employees:

“Australian Christian Lobby is at the forefront of the Australian marriage debate. At ACL you will play a key role in preserving the legal definition of marriage for future generations through the 2016 federal election and the upcoming marriage plebiscite.”

The advertisement for a deputy chief of staff reads “Combine your love for Christ and your love for administration and management in this unique career opportunity with a ministry that is leaving a lasting mark on Australia”. The advertisement for a media relations manager also mentions combining a “love of politics and Christ”. While we doubt any atheists would be interested, we wonder if they’d get a look in — and what Fair Work Australia might have to say about that.

Sharia scaremongering. Is the Sunshine Coast at risk of becoming governed by sharia law? The latest newsletter from Queensland State MP Steve Dickson makes it seem like it’s the top issue for the residents of Buderim. According to Dickson, a member of the LNP:

“There is increasing concern amongst many residents in Buderim that the fairness and freedoms we cherish are in danger of forced and unwanted change, eg respect for the Australian National Anthem and the Australian flag … Sharia law invokes notions of a fierce unjust, male-dominated legal code and any move to introduce these laws should be opposed by everyone, particularly those who believe in women’s civil and individual rights”. 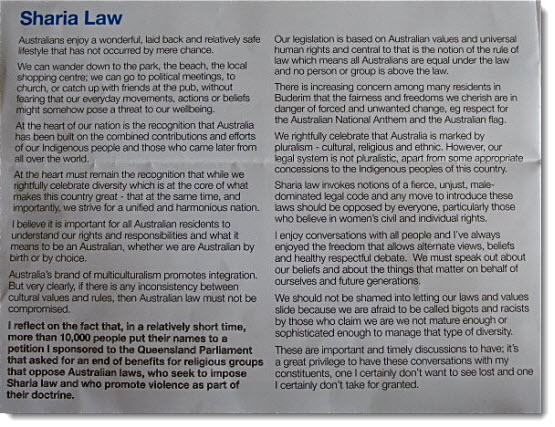 “We should not be shamed into letting our laws and values slide because we are afraid to be called bigots and racists,” Dickson wrote. Dickson has previously sponsored a petition to Queensland parliament against sharia law, which gained 2000 signatures, but it doesn’t mention if it was started by any particular move to implement sharia law in the Sunshine State.

Getting defensive. Earlier this week we noted that a series of freedom of information requests to the Department of Defence were focusing on LGBTI issues in the Defence Forces — including a letter advising that members shouldn’t be allowed to march in Sydney’s Mardi Gras, and financial documents.

A tipster tells us that the FoI requests shown on the disclosure log are just some of many made by Bernard Gaynor, repeated political candidate and ex-Defence Force member. Gaynor was terminated from the army last year after repeatedly using his blog to speak out against the army’s positions on Iraq and Islam, and he argued that military personnel shouldn’t take part in the Mardi Gras. We contacted Gaynor yesterday to ask about the FoIs, and what he is looking for, but did not hear back.

Let them eat gay cakes. The Centre for Independent Studies has helpfully posted a booklet of last month’s Acton Lecture by Archbishop Anthony Fisher to Crikey, allowing us to really mull over the question “Should Bakers be Forced to Bake Cakes for Same Sex Weddings? Democracy and the Rights and Limits of Religion and Conscience in Contemporary Australia”. 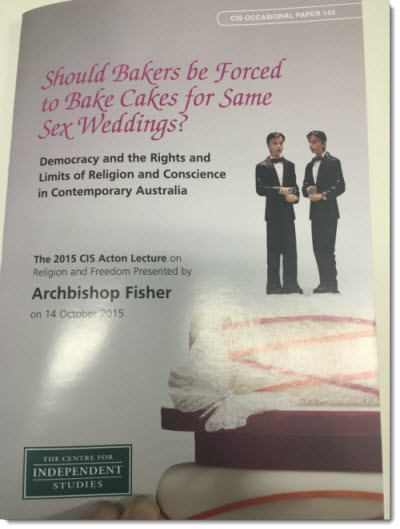 It opens with a hypothetical situation in 2025, nine years after same-sex marriage is legalised in Australia (that’s an optimistic timetable, we think), and Fisher imagines a world where “religious organisations are now required to extend spousal benefits to same-sex ‘married’ employees, have lost their charitable status and now pay the same taxes and rates levied on any other business”.

It may not be the intended effect, but that sounds like a great idea to us.

What a profound relief to have Crikey dismissing the aspirations of Fundamentalist Muslims to implement Sharia Law wherever they can as at best merely amusing and probably not part of their long term plans anyway.
Perhaps Crikey should send an Ambassador Plenipotentiary to Europe so that they too can sleep more soundly. The Crikey Commissariat has demonstrated time and again that they know threats aren’t a part of any version of the modern multicultural world we inhabit.

Sounds good to me – “a world where “religious organisations are now required to extend spousal benefits to same-sex ‘married’ employees, have lost their charitable status and now pay the same taxes and rates levied on any other business”.“.
I’d vote for that, which Party has that in the manifesto?
(Apart from the wilder shores of the Greens, now greying rapidly the dead hand of Di Natali.)

“a world where “religious organisations are now required to extend spousal benefits to same-sex ‘married’ employees, have lost their charitable status and now pay the same taxes and rates levied on any other business”.

Hmm – directing religious organisations on how to extend their “benefits”. Can’t see how that would work. You going to tell the local imams to allow women up the front with the men? Either extend tax free etc status to all legit religions or none.

The law already says you can’t discriminate against a customer based on their sexuality.

John – but allows special dispensation to discriminate against employees, including away from the job.
Treat all religions the same – as private clubs for the psychologically inadequate.