Politics as normal returns as Turnbull sticks to the script

We had high hopes, but last night, Crikey’s Turnbull Bingo was, well, not that successful … 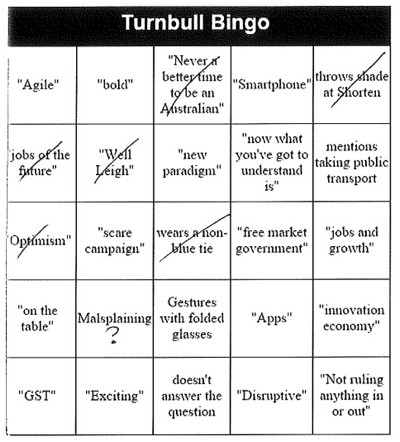 It’s possible the Prime Minister got a glimpse of it before hand and adjusted his rhetoric, but we doubt it (he surely has bigger things on his mind). Alas, in last night’s 7.30 interview, the Prime Minister was less idiosyncratically Turnbull, and more, well, a standard politician.

The Liberals are the party of freedom, he’s confident about the contest with Bill Shorten, and no, everyone in the Liberal Party gets along just fine. It was a stock-standard political set-piece interview, although, we should point out, one devoid of anything that could be described as a gaffe.

Turnbull used to give interviews like that before — he was perfectly capable of staying on message while a minister — but it was notable for the contrast to his earlier interview on the same program in September, a week after the leadership spill.

In the intervening three months, Turnbull has tightened up his messaging. Gone are the long meandering answers and the personal anecdotes. While Leigh Sales was criticised for letting the Prime Minister talk too much during her first interview with him, comparing the two transcripts shows that in fact she spent far more time interrupting in September than last night. In yesterday’s interview, Turnbull’s answers closed naturally after few sentences. Crikey compared the Prime Minister’s average answer length (cutting out introductory remarks and short repartees) and found he’d shaved nearly 70 words off the average answer in the two interviews. In September, his average response was 168 words long. Last night, it was only 100 words long.

Of course, the subject matter of the two interviews likely had much to do with this. While, in September, Turnbull was given time to explain himself as he saw fit (cue lots of talk about innovation, paradigms and general excitement), last night it was the economy, the war, the conservative wing and the opposition.

The last third of the interview was about politics, and it’s this that got the most attention in the subsequent media write-ups. On senators Eric Abetz and Cory Bernardi crossing the floor of the Senate yesterday on a bill about the student services fee, Turnbull explained that only the Liberal Party was the party of freedom, so parliamentarians had that right. Asked bluntly whether Tony Abbott was leading an insurgency against him, Turnbull said no, not at all. He hadn’t even noticed some in his party speaking out against his positions. Asked how he’d campaign on Abbott’s legacy given he pushed for a leadership change, he said he wasn’t worried: “I’m very comfortable in my role, and I am looking forward to an election next year when we’ll present our vision and our capacity to deliver a strong, innovative economy.”

Each of these answers, in its own way, is entirely predictable. Politics as normal is resuming.

Countdown to a debate no one will watch, and odd first interviews

‘Condemned for eternity’: young Turnbull had no love for John Kerr

The peculiar love affair between the Oz media & Turnbull continues unabated. A couple of my conservative friends actually commented on what an easy ride he had with Leigh Sales last night.

Conservatives making remarks about the ABC going soft on a Liberal PM, surely this is unprecedented.

I’ve been disappointed many times when Politicians / Parties I didn’t support won elections. Fortunately, however, I was able even as a gauche youngster to remain calmer than seems to be the case with the Crikey Commissariat.

Zut – as so many have noted, we are still living in the comfort and sheer relief of ‘notAbbott’.
To be generous, SilverMal does have to keep the RWNJ quiescent whilst trying to undo the worst the social & ethical destruction of the last 2 years, until he obliterates the ALP at the next election – such a certain luxury that he can concentrate on the enemies behind him.

Haven’t watched 7.30 for yonks – total waste of time with that Sales dolly-bird. All fluttering eyelashes and NO brain!
As for the rest of the media – agree with zut alors. Nauseating +++