The Age farewells some veteran journos. And other media tidbits of the day.

Veterans bow out. As Age staff sent off senior court reporter Steve Butcher yesterday, they also bid adieu to associate editor Shane Green — another redundancy. Green’s done just about everything one can do at Fairfax: he’s been a foreign correspondent, and worked as editor in rounds like state politics, national news, and education. Also leaving is Graham Reilly — The Age’s features and investigations editor, a 28-year veteran, and senior writer and columnist Amanda Dunn. By Christmas, The Age‘s newsroom will be noticeably younger, and more digitally focused. Crikey understands at least several other Age reporters are currently in negotiations over their redundancies, joining journos like John Garnaut (off to Malcolm Turnbull’s office), Amy Corderoy (off to med school), and Rick Feneley in using the Sunrise discussions to draw a line under their time at the company. — Myriam Robin

Correction: An earlier version of this item said Andrew Stephens had taken redundancy from Fairfax. He has not.

News Corp backtracks. Earlier this week, we told you about how a pollster who worked on the Sun’s “1-in-5 Muslims support jihadis” poll had come out criticising the poll’s methodology and how it was portrayed by The Sun. Yesterday, fellow British News Corp paper The Times issued an apology for relying on the poll:

“We reported the findings of a Survation poll of 1,000 British Muslims (News, Nov 24). Asked ‘How do you feel about young Muslims who leave the UK to join fighters in Syria?’, 14 per cent of respondents expressed ‘some sympathy’, and 5 per cent ‘a lot of sympathy’. The survey did not distinguish between those who go to fight for Islamic State and those who join other factions in Syria, and did not ask about attitudes towards ISIS itself. Our headline, ‘One in five British Muslims have sympathy for Isis’, was misleading in failing to reflect this.”

Scott on competition. Mark Scott, who leaves the ABC next year, has given a long interview to the Financial Review on his 10-year tenure at Aunty. It covers a range of topics, but here’s what Scott said on arguments the ABC was crowding out commercial operators in the digital space:

“I would argue in the digital space we are having no material impact on the operation of other commercial media entities … We’re not taking a dollar of revenue from advertisers nor a dollar of revenue from subscribers. If they are concerned about our websites, the reality is that there are almost a billion websites about today and so much news has been commoditised. The aggregators are of massive scale and if there are problems — and Malcolm Turnbull said this — we’re the least of them.”

Somehow we doubt Oz editor-in-chief Chris Mitchell, whose criticisms of Scott are quoted in the profile, would be satisfied by that. — Myriam Robin

Unsubscribe. You know that a company is hiding some big news when they make a regulatory filing on the eve of a major holiday. And so it was with Walt Disney Co, which early today slipped out an updated filing with the US Securities and Exchange Commission on the eve of the biggest American holiday of all, Thanksgiving. The filing confirmed what independent analysts have been suggesting since August: its key ESPN sports cable network is bleeding subscribers — 3 million in the year to October 3 and down 7 million from 2013. In fact US analysts say ESPN’s number of subscribers (92 million) is no higher than it was 10 years ago in 2006.

On top of that, some of Disney’s other entertainment channels have lost millions of subscribers as well. Disney’s filing says that its Disney Channel and domestic Disney XD each lost 4 million subscribers in two years while ABC Family lost 5 million.

And according to data in the Disney filing, the financial impact is substantial. Cable subscribers on average pay US$6 a month for ESPN, making it the most expensive cable channel in the US. Based on that, the loss of 3 million subscribers in one year would cost Disney around US$216 million in lost revenue — around US$800 million since 2013.

Other cable companies, such as Time Warner, and the satellite operators, Dish and DirecTV (now swallowed by AT&T) have also revealed falling subscriber numbers. Others, such as Comcast, have had a big switch of subscribers, from video to broadband (which is also happening at Time Warner and Charter).

Despite the loss of eyeballs in its biggest and most important business, Disney shares are up 26% this year because of the looming new Star Wars movie, which debuts on December 18. — Glenn Dyer

Front page of the day. We thought we were reading the NT News ... 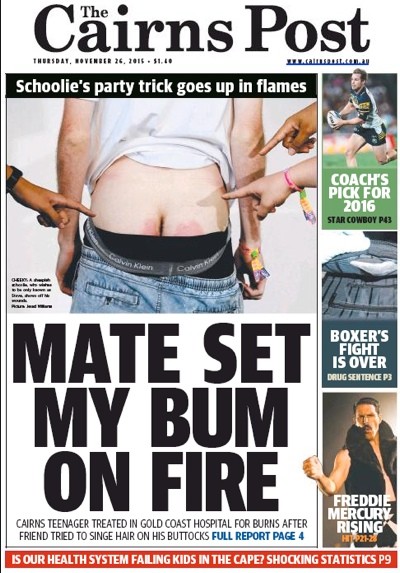