B-I-N-G-O. Prime Minister Malcolm Turnbull will appear on 7.30 tonight, giving us yet another chance to hear our dear leader speak about the topics close to his heart. We have come almost to the point where we can predict what Turnbull will say next, and competitive as we are, turned into a game. We present to you Turnbull Bingo for tonight’s interview. Click here for more bingo cards for a game for the whole family. 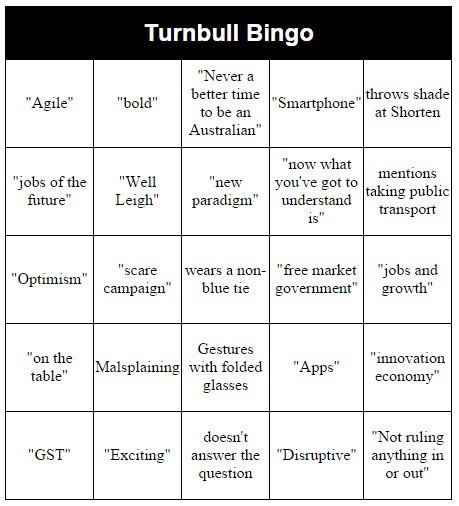 One member of the Crikey bunker suggested a Turnbull drinking game — maybe we’ll save that for next time.

King of Melbourne’s Riviera. Member for Dunkley Bruce Billson has been paid a fond farewell this week, after he announced he was retiring from Parliament. It’s unlikely we will ever see a more enthusiastic minister for small business, and Strewth’s James Jeffrey even wrote Billson a loving poem to mark the sad occasion. Said poem was read to Billson on RN Drive on Tuesday night, with Patricia Karvelas giving it great flourish. Billson told a spy for Ms Tips that “I just about wet myself when I heard [about the poem]”, and that no one had ever written him an ode before. He also said he appreciated the outpouring of feelings on Twitter: “It was an unusual thing, as it [Twitter] is not usually the platform for love. But I was very touched to be perfectly honest.”

Spatially aware senators. What do senators need be taught about manners? A lot, according to the inaugural newsletter from the President of the Senate. “From the President’s Chair: An occasional procedural bulletin” was circulated to senators this week from Senate President Stephen Parry. 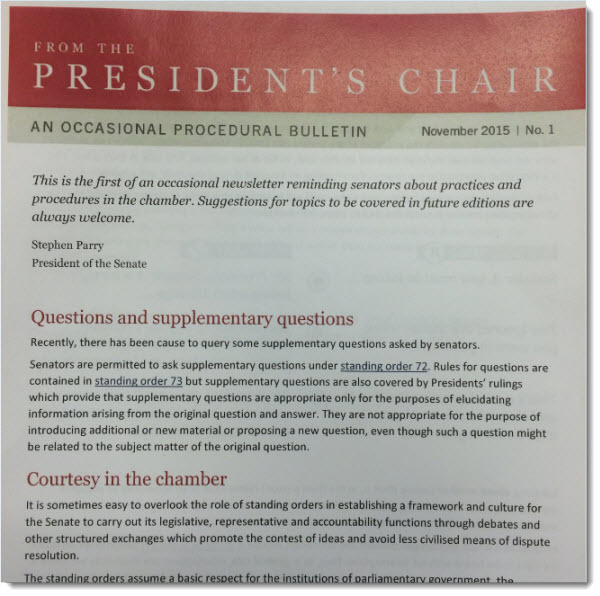 It covers questions and supplementary questions, and also “Courtesy in the chamber”. It tells senators to “Acknowledge the chair, be spatially aware” (which could make a nice jingle), reminding senators not to walk between the chair and the speaker and to take their seats quickly when entering the chamber. It also includes a list of acceptable and unacceptable phrasings: 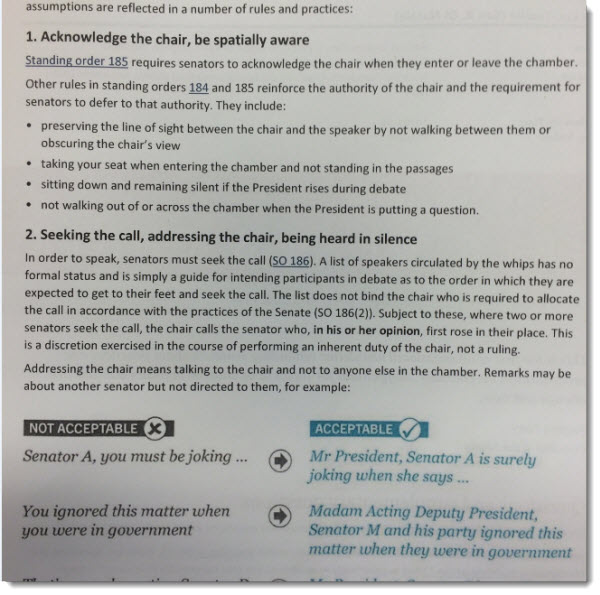 Safari for a cause. As the sitting week draws to a close, we have just one more week of Parliament before our representatives rise for the summer break. That means that we are just one week until Philip Ruddock wears his promised safari suit to Parliament in order to raise money for motor neurone disease. At the time of writing, Ruddock is just $203 off his goal, and the list of donors includes his fellow parliamentarians.

Emails for all. The Canberra press gallery received a few unexpected emails last night and this morning, one from the Prime Minister’s Office, which was intended for government press secretaries, asking for their December “Communication Plans” and electorate visits. We considered adding a few visits to the list, but decided to play nice. The other was from Opposition Leader Bill Shorten’s media team, sharing an article from The Guardian on the gender gap in the workforce. There was no explanation — maybe they just thought the press would find it interesting?

Turnbull Bingo. Ha!
The scales fall from my eyes…