Media briefs: Nancy gets the rolled-up newspaper … another one bites the dust … Thatcher-JP II conga line …

The ABC has taken exception to Gerard Henderson's characterisation of its political make-up. We're sure we will hear Hendo's side in MWD. Plus other media tidbits of the day.

We’re sure this will end well. The ABC has publicly released a statement to The Australian accusing perennial critic Gerard Henderson of consistently misreporting basic facts about the lack of conservative voices on Radio National.

“Your columnist Gerard Henderson (November 20) consistently misreports basic facts about bias at the ABC predicated on, he claims, a lack of conservative voices heard on RN programs,” radio director Michael Mason stated. “RN currently broadcasts programs presented by Amanda Vanstone and Tom Switzer, both of whom identify as conservative.”

The ABC’s “stringent procedures” around bias “ensure that the ABC consistently rates as the most trusted news source in the country, and that the Corporation itself is the most trusted public institution after the High Court”. “Perhaps Gerard’s reporting (and that of his dog Nancy) ought reflect these facts in future.”

Crikey will here note our disappointment that Mason’s response was not sent directly to Henderson, where the correspondence would no doubt quickly devolve into a long-winded back-and-forth about the meaning of “conservative”, subsequently published in Nancy’s weekly Media Watch Dog column. Though there’s still a good chance that’s still what will happen. What’s that saying about picking fights with those who buy ink by the barrel? — Myriam Robin

Sunsets continue. Another name to that redundancy list we’re sorta keeping. The Fin reports SMH/Age Asia-Pacific editor John Garnaut has “scooped up a fat redundancy package and scored a gig in the Prime Minister’s office”. Know who else is going? We’re all ears.

Happy hard work, Dave. David Attenborough will turn 90 on May 8 next year, and to mark that auspicious date, the BBC is planning an hour-long special that will look at his long and golden career and examine the way he has changed the way natural history, nature and life itself. During the program, he will be interviewed in front of a studio audience. And to mark his 90th year in his own way, Attenborough’s new special, Great Barrier Reef, will be broadcast on the BBC, as will a second program called Waking Giants. And the BBC is keeping his 90-year-old nose firmly to the grindstone by announcing a new series called Light on Earth that will examine bioluminescence. The BBC described that as “using new, ultra-sensitive and specially designed cameras and a new generation of deep sea submersibles and robots to help show the light created by living things in a way that was seemingly invisible before”. This program is well into production and the BBC said in its release:

“At this halfway stage in the production, amazing sequences filmed for the first time include the bioluminescent millipede glowing on the forest floor; the bioluminescence of a living dragon fish; the mesmerising flashing light patterns of the synchronous firefly in real time; and the spooky glow of the lantern shark’s belly.”

David Attenborough once said he would retire at 80. — Glenn Dyer

Irony of ironies. Suddenly the UK Conservative government of David Cameron has discovered that the BBC, and especially the BBC WorldService, is an asset in these days of fighting Islamic State and other terrorists and resisting the adventures of President Vladimir Putin and other threats (North Korea). Instead of slashing BBC budgets (or rather, forcing the BBC to impose its own cuts in a form of political gutlessness) the Cameron government is handing out 85 million pounds (over A$180 million) to the BBC World Service to “uphold global democracy”. (OK, stop choking and spluttering).

Back in 2010, the then-coalition government led by Cameron (allied with the now almost defunct Liberal Democrats) forced the BBC to take over funding of the World Service from the Foreign office. Cameron and his Chancellor of the Exchequer, George Osborne, were on a slash-and-burn campaign aimed at punishing the BBC, and bringing the UK budget back into surplus by 2014-15 (which it missed, so it had another go overnight). The BBC licence fee was frozen for six years, and the BBC was forced take on the funding of the World Service to the tune of 340 million pounds (over A$700 million at the time). No mention then of “upholding global democracy”.

Today’s new money will be used to increase BBC World content in North Korea, the Middle East and Africa (all trouble spots back in 2010). There will be expanded services for Africa, new radio services for audiences in North Korea and radio and digital services for Ethiopia and Eritrea. The BBC will also expand TV, radio and digital offerings in Somalia, India, Nigeria and Thailand. There will also be help boosting digital and TV services for Russian speakers, both in Russia and surrounding communities. “Soft power” needs hard cash, as it did back in 2010.

So will the Turnbull government in Australia discover once again that Radio Australia exists? Or will they outsource soft-power to the likes of Lachlan Murdoch’s Nova radio business, to play smooth music into the south Pacific and south-east Asia? — Glenn Dyer

The result for the most successful news website around the globe tells us it is very hard for media companies to monetise the big audiences they are building for their free websites. With the exception of the Financial Times (it seems), newspaper companies with paywalls are suffering in a similar fashion. The New York Times is a prime example — well over a million subscribers for its paywall, which exceeds the Monday to Friday sales of the dead-tree paper, and yet digital revenues are only growing slowly at best — at a slower pace than the growth in paywall subscribers.

There is too much inventory, the use of ad blockers by consumers is rising, and more and more advertisers are growing sceptical of the metrics being provided by the newspaper companies about uniques, time spent on websites, viewing times for ads, etc. There is a growing suspicion that bots are clocking on more and more ads (ad fraud, it’s called) and that video ads and items are not being viewed to the end. But the biggest problem is the rapid rise of Facebook (and, to a lesser extent, Twitter and Instagram and other social media sites), which are sucking ad dollars (pounds) away from the likes of Mail Online. Its 203 global uniques are just 20% of the number of people who used Facebook in the September quarter (just over 1 billion every day of the quarter). — Glenn Dyer

Video of the day. The National Review turns 60 and celebrates with … whatever this is. 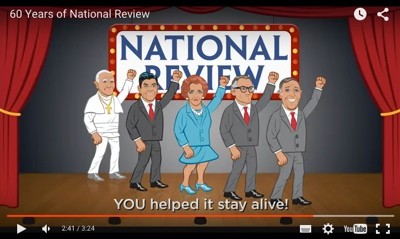 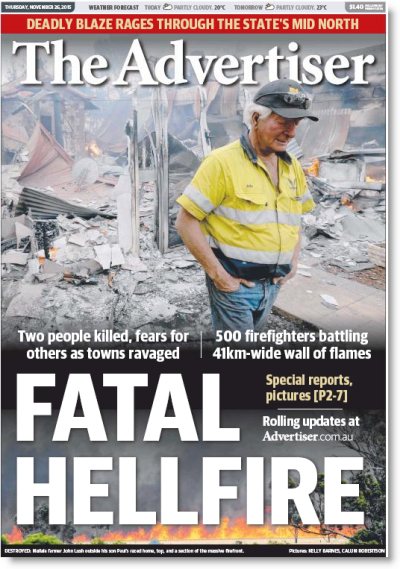 That loathsome Julie Bishop was responsible for gutting the ABC coverage in SE Asia and the Pacific. the service wasn’t perfect but it was all we had.
I loved the Gillard haters in Cambodia losing their AFL, ARL and Wallabies coverage though.