The machines are coming. Politicians of all stripes took part in a Coding and Innovation “boot camp” this morning, with students from local schools showing pollies their creations, which included “a smart letterbox which sends you emails on receiving physical mail” and “an engineered robotic dog that uses ultrasonic sensors to engage”. While politicians were keen to show how innovative they were, News Corp journo Jackson Gothe-Snape asked a few MPs what their favourite coding language was — Matt Williams and Amanda Rishworth answered Java, while Jason Clare and Kate Ellis didn’t have an answer.  The event was sponsored by Intel, which led to some interesting photo opportunities with the company’s robot. Bill Shorten looks concerned that it will soon take over as Labor leader: 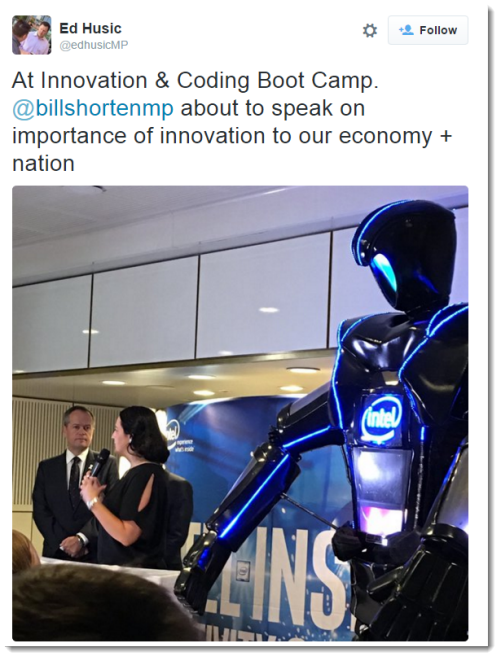 You’re the voice. Despite the last Parliament having an actual member of a rock band as a minister, there has never been a parliamentary friendship group devoted to Australian music, until now. Currently moustachioed member for Herbert Ewen Jones is known for, among other things, his love of music. Last night the Liberal backbencher launched the Parliamentary Friends of Australian Music in Parliament House, with performances by Australian artists Brendan Gallagher and Mondo Rock’s Eric McCusker. The inaugural Friends of Australian Music include Jones, Julie Owens, Graham Perrett, Bert van Manen, Craig Laundy, Andrew Leigh, Alannah MacTiernan, and Alan Tudge. But according to a video of the event Triple J’s Alice Workman put on Twitter last night, former speaker Bronwyn Bishop appeared to be uplifted by the performances at the event.

Speaking of music, Greens MP Adam Bandt tweeted last night that he was enjoying the sounds of the Canberra Choral Society (including the AFR’s Laura Tingle) in Parliament: 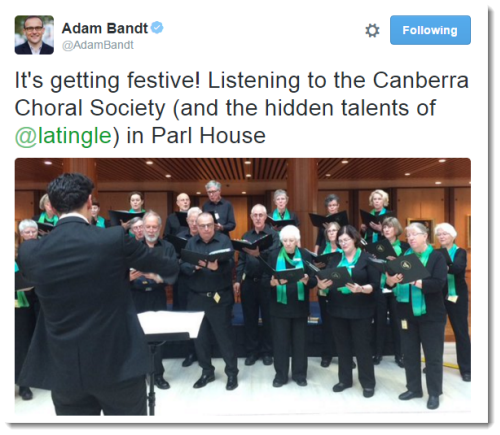 Mandarins are the new black. Speaking of Laura Tingle, it looks like Prime Minister Malcolm Turnbull is singing from her song sheet. The Prime Minister announced yesterday that Martin Parkinson would be brought in from the cold after former PM Tony Abbott dumped him as Treasury secretary, and confirmed that Department of Communications secretary Drew Clarke would become the permanent chief of staff of Turnbull’s office. We wonder if Turnbull has had time to read Tingle’s latest Quarterly Essay, “Political Amnesia”. In it, Tingle writes that it’s only recently that the role of a Prime Minister’s chief of staff has come from a political rather than a public service background:

“Those with longer memories note two particular features of the offices of Kevin Rudd, Julia Gillard and Tony Abbott. Most notably, none of them opted for chiefs of staff with long bureaucratic experience. The point is not that public servants are the fount of all wisdom: it is that they know how the public service works and what it can, and can’t, do for you. Having a public servant running your office also implies a degree of respect for the institution of the public service, rather than the hostility that Tony Abbott and his office exuded, or even the unreasonable expectations put on it by Kevin Rudd; it suggests that you understand government is a lot larger than politicians alone. The most successful periods of the most successful, and lengthy, prime ministerships of recent times — those of Bob Hawke and John Howard — saw the Prime Minister’s office run by people with public service backgrounds, or on secondment from the public service. “

Sing a song of taxes. Senator David Leyonhjelm has kicked off the silly season in fine form, singing a tax version of the 12 days of Christmas to the Senate this morning: 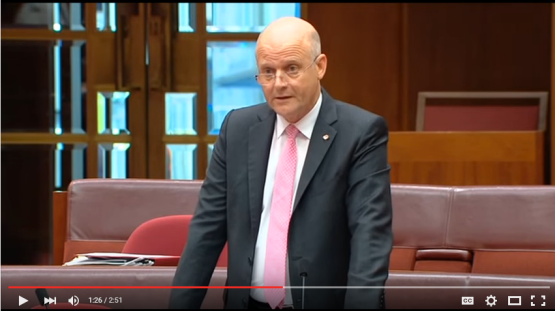 Don’t go anywhere. No, really, anywhere. The United States has issued a travel alert for its citizens — covering the whole world. According to the alert, released on Monday, Americans should be aware of the “possible risks of travel due to increased terrorist threats”. Tomorrow is Thanksgiving in the US, marking one of the biggest weekends of travel for the year. No place in the world is exempt from the alert, which says that “U.S. citizens should exercise vigilance when in public places or using transportation.  Be aware of immediate surroundings and avoid large crowds or crowded places.”

Cough cough. Clive Palmer cancelled a press conference to be held with Bob Katter and Andrew Wilkie this morning, saying he was “unwell”. That’s a bit of a worry seeing as The Australian reported this morning that his businesses are facing a “‘drop-dead date’ within days, as the MP intensifies legal pressure to win a quick cash injection from his Chinese adversaries”.

ET phone St George. A Crikey tipster was amused that St George was offering him house insurance for both natural and supernatural disasters — including an attack by aliens:

I know it’s probably a bit cruel. (It’s not really)
But I’m seriously looking forward to that special moment of schadenfreude, when the bailiffs arrive and Clive finally joins the dinosaurs in the land of the lost white shoe.

One of Labor’s most successful leaders, Neville Wran, provides a model that should be seriously considered. Wran’s public service head, Gerry Gleeson, was largely left to run a tight rein over the bureaucracy in return for unparalleled loyalty to the Premier. Wran, and an inner circle of his most senior ministers, made the policy decisions – with a mixture of public service advice and advice from a small team of trusted personal advisors. Gleeson unflinchingly made sure the Government’s decisions were carried out.