Isentia index: It’s ‘not a time for gestures or machismo’… or cake with Tony?

Prime Minister Malcolm Turnbull’s five-nation tour is on a brief hiatus, after introducing himself to at least 20 leaders, and will finish at the CHOGM summit in Malta next week after stopping by Parliament’s final fortnight of sitting. His national security speech yesterday outlined the reasons for not stepping up Australia’s military response against ISIS, […] 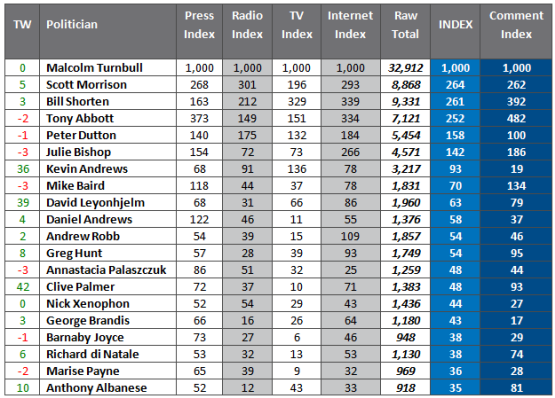 Prime Minister Malcolm Turnbull’s five-nation tour is on a brief hiatus, after introducing himself to at least 20 leaders, and will finish at the CHOGM summit in Malta next week after stopping by Parliament’s final fortnight of sitting. His national security speech yesterday outlined the reasons for not stepping up Australia’s military response against ISIS, and pointed to an overhaul of our terror alert system that will commence this week. Former PM Tony Abbott, down two places this week but still high on our index, supported a stronger military reaction in Syria, and has been called out by some Liberal MPs for hosting private lunches with conservative colleagues, including Kevin Andrews, in the Monkey Pod meeting room.

Treasurer Scott Morrison is up five places this week into second, as he and the PM announced they would accept most – 44 out of 56 – of the recommendations from the Harper Review of local competition laws, including those covering retail trading hours, taxi services and road transport regulations. Tax reform talks hovered about as the Senate continued to debate transparency among private companies, and as the PM said he would request Turnbull & Partners be removed from ASIC’s list of companies exempt from submitting audited financial accounts.

Opposition Leader Bill Shorten announced some election pledges over the past week, including an increase to the cigarette tax and domestic violence leave, while Independent MP David Leyonhjelm praised childless Australians and supported the ‘no jab, no pay’ bill which would see childcare and other benefits cancelled for parents who don’t immunise their children. He went further and said most welfare payments for parents should be abolished. Palmer United Party’s Clive Palmer discussed same-sex marriage and hinted that he is the person to thank for the replacement of Abbott on ABC’s Insiders.

Even lower numbers on social media than last week, with discussions ranging across climate change, terrorism, and domestic violence.

Caller Leslie told Andrew Bolt the PM “spoke a lot of waffles” while meeting US President Obama, who she says is the worst President the US has had.

She’s here! She’s really here! Well, according to the ever-reliable #EDGETaylorSwiftWatch, which also insists someone saw her “at the North Pole at Santa’s workshop!” In any case, she starts her Australian tour in Sydney this weekend. And Tay, if you’re reading… I Know Places.