Harper Review: reform still slinks past the long shadows of the powerful

The government's response to the Harper review of competition law follows a pattern of reforming only if it doesn't upset powerful interests.

As is well known, one of the key political problems of economic reform is that it’s difficult to achieve if there are any losers — or, more accurately, when there are powerful losers. If you’re a low-income earner or an industry sector that doesn’t have the ear of government or you’re not a big political donor, the fact that you lose from a policy decision isn’t so much of a problem. That’s why, for instance, the alleged “tax debate” keeps defaulting back to demands for a GST rise and a company tax cut.

The failure to accept the review’s recommendation to beef up section 46 of the Competition and Consumer Act on the misuse of market power to damage a competitor — via an “effects test” — is only the most prominent example. An effects test has long been backed by the Australian Competition and Consumer Commission as well as small business to replace the unworkable current provisions that require proof of intent to harm competition, but the idea sends big business and their lobbyists into a froth-mouthed fury. It was entirely apt that Bruce Billson, who championed an effects test and small business, announced his retirement the day Treasurer Scott Morrison kicked the idea into touch.

Instead, there will be another consultation on an effects test — apparently an international conference, a webinar and 11 different consultation meetings by Harper and his panel weren’t enough — and the matter will return to cabinet in April, quite possibly after an election. The best small business can hope for, given Morrison’s remarks yesterday, is a kind of half-baked version of the recommendation, and even that will be fought tooth-and-claw by the Business Council.

But look through the government’s response, and there are more instances where reform has been ducked because it might upset powerful interests. Harper and co recommended dumping restrictions that provide the politically powerful pharmacist industry with protection from competition — particularly from Coles and Woolworths — and limit choice for consumers. For all the talk of making consumers the focus of policy, the government is having none of that — it “notes” this recommendation and says it has already agreed with the Pharmacy Guild that a review will be conducted in … 2017. Don’t hold your breath for chemist shops at the back of Woolies.

The review also recommended that current, longstanding restrictions that prevent international airlines from carrying passengers on domestic legs of flights be ditched — which would inject significant competition into our domestic aviation market. That, of course, would upset incumbent airlines and especially those trusty union-busters at Qantas, so that recommendation has also been “noted” i.e. rejected.

Also rejected was Harper’s recommendation that the silly restrictions and punitive tariffs on the importation of second-hand cars — no longer justifiable given we’ve killed off the Australian car industry — be removed, in line with the Productivity Commission’s recommendations. Given how much that would upset the automotive retail sector (remember the way the Coalition opposed Labor’s Fringe Benefits Tax changes on novated leases?) that, too, is a no-no.

And there are some other areas where the government is plainly happy not to have the responsibility of implementing reform. The review correctly called for road pricing — a policy no-brainer that would revolutionise road usage and provision in our major cities, but one that would upset motorists. The government only promised to “investigate the benefits, costs and potential next steps of options to introduce cost reflective road pricing for all vehicles” —  a wholly spurious “investigation” given the case for road pricing and the technological ease with which it can now be introduced are well known.

(Incidentally, when road pricing was mentioned in a discussion paper for the Tax Forum in 2011, The Daily Telegraph went feral in an absolutely ludicrous piece claiming the Greens and Labor were intending to slug motorists. Now, a Coalition government has said it will “investigate” road pricing. Do you think the Australia’s least-trusted newspaper has even mentioned slugging motorists? Don’t be silly.)

Then there’s a mob that make pharmacists look innocuous — the international copyright cartel, which is adept not merely at convincing governments like our own to do their bidding on internet censorship, but also at getting the US government to impose their intellectual property laws on other countries via trade agreements like the Trans Pacific Partnership. The review didn’t even call for an end to Australian negotiators rolling over to the US on copyright, as we did in the AUSFTA a decade ago. All it proposed was:

“A separate independent review should assess the Australian Government processes for establishing negotiating mandates to incorporate intellectual property provisions in international trade agreements. Trade negotiations should be informed by an independent and transparent analysis of the costs and benefits to Australia of any proposed intellectual property provisions. Such an analysis should be undertaken and published before negotiations are concluded.”

But whereas the government is gung-ho for more reviews elsewhere, it doesn’t like having one to check whether the highly paid bureaucrats of DFAT have given away too much in trade deals. “The Government already has robust arrangements in place to ensure appropriate levels of transparency of our negotiating mandate,” the response says (this after negotiating the TPP with only US multinationals allowed to see the text) and “an independent cost benefit analysis being undertaken and published before negotiations are concluded … would reflect incomplete or inaccurate outcomes”. But remember, the government refuses to let the Productivity Commission assess any part of the TPP even after the agreement has been concluded.

For sectors that aren’t so powerful, though, reform is your lot. Removal of restrictions on parallel importation of second-hand cars might be too much but removal of restrictions on importation of books is now back on the agenda for the Australian publishing industry. And taxis, too — politicians used to live in terror of the taxi industry, and many still do. But Uber has shattered that power — particularly after the ACT broke ranks and legalised it. With the taxi sector badly weakened, the government felt sufficiently emboldened — despite taxis being a state matter — for it to support a review of taxis and ride-sharing as a priority.

*Tomorrow: Harper, human services and what the government got right 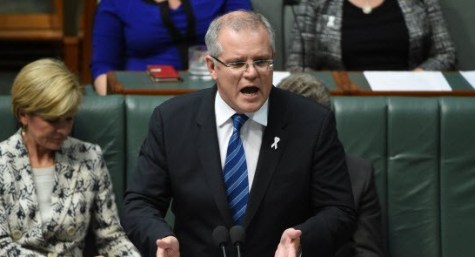 Harper Review: outsourcing services, but not responsibility, in health

Richardson: badly-needed taxi reform could be a monopoly buster

So “powerful lobbies” prevent reform of their cosy situations. Those “once powerful lobbies” such as the taxi industry, face reform. One very powerful lobby in Australia today is of course the low income lobby, which has a majority of the Senate in its pocket. So no one needs lose any sleep about an increase in the GST unless the Senate balance shifts. This is unlikely with the rorting of the preference system in place at the moment.

So all that this story is saying is that if you are a powerful lobby, you have more influence over government policy than if you are not.

Knock me over with a feather.

Yeah, it’s kind of obvious, and I don’t know if we are the only country to be so obvious and arrogant about it, but we have more in common with oligarchy-lead governments, than we do with the more open societies.

So basically, what they are saying is if you make a hell of a lot of money, give the LNP a little bit of it (don’t strain yourself), you have just bought a law. Don’t give money, don’t get law.

And we want to the next Silicon Valley, agile, innovative – as if!!!

I don’t think the main factor is having a lot of money. That is a favoured dystopian view by many but the facts show a different outcome. Look at the coal seam gas issue which has seen governments in NSW and Queensland stop most of it. In today’s news, the NT government has changed its policy on fracking for gas in face of determined lobbying by voters. Same with the Adani Charmichael project in the Galilee basin.

You can’t build anything in Australia in 2015. No industrial development is allowed in the face of determined NIMBY opposition cowing timid governments. No dams, no ports, no big industries, no new mines, no natural gas projects. All stuffed by Green activists threatening timid governments with voter backlashes.

Rich investors have no chance.

Come on David . . “Rich Investors have no chance” Even Andrew Bolt would blanche . . .