“I’ve just been informed that ‘Reclaim Australia’ are using ‘Holy Grail’ at their rallies.

Let me be clear. ‘Reclaim Australia’ is a racist organisation.

We stand together with refugees and asylum seekers the world over.

We are opposed to bigotry, race hate and fascism.

‘Reclaim Australia’ has no place in Australian Society.”

The post comes after both Jimmy Barnes and John Farnham made it clear that Reclaim Australia was not welcome to use their songs at rallies held by the anti-Islamic group. Seymour is a supporter of refugee rights — he wore a T-shirt emblazoned with “asylum seeker” when performing at the AFL grand final in 2013 and posts often about his support for welcoming more refugees to Australia.

In other news from the rallies yesterday, the United Patriots Front announced on Facebook that they would be starting their own political party, to be called “Fortitude”. They haven’t explained why the name has been chosen but it bears an unfortunate (or maybe purposeful?) connotation with the Australian Border Force’s Operation Fortitude — the failed plan to check people’s visas on the streets of Melbourne earlier this year. Maybe they were inspired by the Border Force?

Thinking of Apple Paltrow? Queensland MP Bob Katter has introduced a bill to Parliament that would protect the children of celebrities from the paparazzi, with the explanatory memorandum saying that the children have a right to privacy:

“The children of persons of prominence should not be forced into the public arena for public scrutiny. Everyone has a right to privacy unless and except that they place themselves in the public arena. The taking of photographs of children against their will or permission, or that of their parent or guardian, should be illegal.”

We’re not sure which celebrities of far north Queensland asked for the protection for their kids — perhaps Katter was just looking out for Suri Cruise, who has already got into her first paparazzi altercation.

Partying across party lines. High-profile Greens candidate for the seat of Higgins Jason Ball, held his campaign launch party in South Yarra on Friday night, but it was a guest with a different political pedigree who caught our tipster’s eye:

While attending a party isn’t the same as buying a party membership, Ball’s appeal could steal a few votes from the ALP.

Crowd-funded transparency. Self-proclaimed pedigree internet pest Geordie Guy made a freedom of information request to the Attorney-General’s Department to find out which agencies can access our metadata without a warrant. But he was told by the Attorney-General’s Department it would be too much work to hand over all documents. He revised his freedom of information request to be just a list of the agencies that had applied to access metadata under the government’s new scheme, but late last week was told by the department that it would require 23 hours of consultation, which would cost Guy $423 to undertake — without a guarantee that the information would be handed over. Not deterred, Guy launched a Pozible crowd-funding campaign on Saturday, and in a matter of hours had funded the request in full.

Speaking of crowdfunding, Labor MP Tim Watts is using Pozible to fund $4000 of his campaign in next year’s election. Watts has rebadged Whitlam’s slogan “It’s Time” to “It’s Tim”, and the rewards include a stubby holder with quotes from Liberal Senator Cory Bernardi and a tea towel bearing the words of Mark Latham. 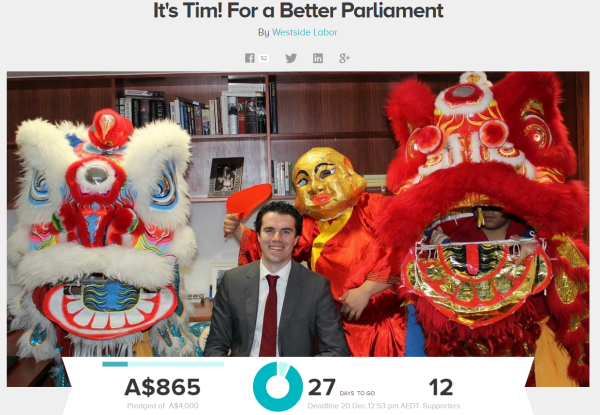 Whispers in WA. A caller to 6PR in Perth on Friday says that Federal Social Services Minister Christian Porter was seen having a “deep chat” with former WA Nationals leader Brendon Grylls in the courtyard of WA’s state parliament last week. What could they have been chatting about?

Once again Tips and Rumours is competing with the Otto Bins for available useless materials.
Par for the course is a phrase which comes to mind, isn’t it.

Oh Norman lighten up, you obviously read the column. I am not sure why you spend good money on a subscription, are you a masochist?