Sharri Markson and five other Australian journalists have spent time in Israel as guests of the Israeli government. But not all were keen to disclose their hosts' largesse ...

The vast majority of junkets journalists are sent on are paid for by private companies. But some are paid for by governments or those associated with them. Does this affect the coverage for readers and viewers? And if the junket isn’t disclosed, how would readers know?

Six Australian journalists have spent the past few days in Israel, as part of an annual junket organised and paid for by the NSW Jewish board of deputies and the Australia/Israel and Jewish Affairs Council. The journos spend time with Israeli officials in Israel, visit Ramallah on the West Bank, and make visits to the borders of Gaza and Syria. On the trip this year are David Lipson from Sky News (soon to join Lateline), Aaron Patrick from the Fin, Fairfax political editor Bevan Shields, Daily Tele deputy editor Ben English, The Australian’s Sharri Markson and Seven News’ Alex Hart.

As The Guardian’s Amanda Meade has already noted, both Patrick and Markson have already filed from the trip. When Meade wrote her item on Thursday, neither Markson nor Patrick’s stories had carried a disclosure. Since then, Markson has filed another story for the Weekend Oz, which quotes Palestinian officials justifying why some of their people go to Israel to conduct knife attacks … 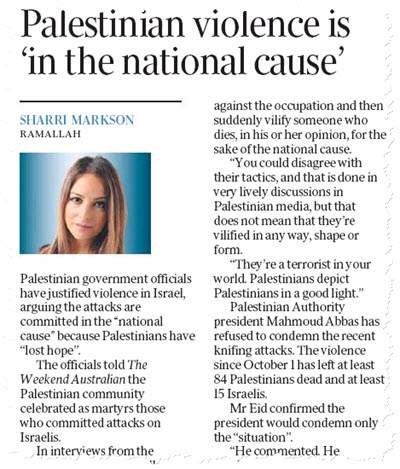 Like her previous story, this also does not contain a disclosure. It does, however, make a passing, though unexplained, reference to the trip, quoting a spokesman for the Palestine Liberation Organisation dismissing a question by saying that the journalists interviewing him had spent “a few days on the Israeli side”. (Markson did not always play by her hosts’ rules — she was detained by Israeli security after she broke away from the group to question and exchange contacts with injured Syrians getting treatment at an Israeli hospital.)

Markson isn’t the only Australian journo to go on overseas trips funded by others of late. Foreign editor Greg Sheridan, who some at the Oz are speculating could be getting a promotion soon as part of the reshuffle caused by editor-in-chief Chris Mitchell’s departure, has recently spent some time in Singapore as “a guest of the Singapore government”. As of the weekend he’d filed two stories on his trip, and both carry a disclosure down the bottom …

While in Singapore, Sheridan interviewed Japan’s foreign minister Fumio Kishida, and Singapore’s PM Lee Hsien Loong, the son of Singapore’s first leader, Lee Kuan Yew. The Singaporean government certainly got glowing coverage out of it. Towards the end of Sheridan’s piece comes this line:

“A couple of months ago, Lee’s People’s Action Party won a resounding election victory, with a big pro-government swing. It is true enough that the Singapore government enjoys a friendly media at home, but everyone acknowledges that Singapore’s elections are clean. The votes are counted honestly and people are free to vote as they like.”

The last two statements may be true, but it’s a generous interpretation of Singapore’s electoral system, which many independent observers have criticised. For example, there’s this from The Economist’s obituary of Lee Kuan Yew earlier this year:

“The political system is based on the Westminster model inherited from Britain, but subtly modified to prevent the emergence of a serious opposition party. The mainstream press was tamed. Constituency boundaries are manipulated, and the introduction of group constituencies, ostensibly to ensure minority representation in parliament, is a further hurdle for small opposition parties. It also magnifies the distortions of a first-past-the-post system. In the most recent general election in 2011, the PAP won 60% of the votes, but more than 90% of the seats. Mr Lee and other leaders have also used defamation suits to defend their reputations. Opposition leaders have found themselves bankrupt.”

Yes, Singapore is an example of a benign dictatorship. “Benign” as long as you don’t buck the system.

Ahhh, Singapore – the land of the accountable ballot paper and if you have the audacity to live in an electorate that returns a non-PAP representative, then don’t expect any government services. Defamation suits? Why not come straight to the point and say the Singaporean judiciary are a mob of compliant squibs – the same as Malaysia re Anwar Ibrahim. If judges don’t give the government what it wants, then say bye bye to a fat salary and a fat pension and lots of other government largesse – not to mention being socially ostracised. The maddening thing is, though, that with 60% of the vote, they don’t need to exercise their ruthless and outdated Confucian values. They can so easily embrace modern democratic values.

Apropos 3, I must confess to an enduring love affair with Singapore and its people. As a youth, I recall the media stories about Harry Lee’s tears after being kicked out of the Malay Federation by the Tunku in 1965 because of the delicate demographic numbers game. So, from destitute paupers in 1965 and with little potable water, natural resources or markets to a first world power with a higher standard of living than Australia – all in one generation – you can somewhat understand the paranoia then. But this is 2015!