You shall not slander Rupert ... let's get it started in here ... Andrew Bolt the anti-racist ...

Disobedience censored for News Corp. The Powerhouse Museum has been accused of censoring one of its latest exhibitions, after newspapers critical of Rupert Murdoch were removed from the Disobedient Objects exhibit at the last minute. The exhibition, which opened at the museum last week, features objects of political activism “by people collectively taking design into their own hands to make a change in the world”. When originally exhibited at the Victoria and Albert Museum in London, it included two political newspapers, which according to a source close to the exhibit were “produced in 1986 during the London Wapping dispute (between printworkers and Rupert Murdoch’s News International, it was a real turning point for labour struggles in the UK, alongside the more famous miner’s strike)”.

The pictures are not included in the current exhibit, and curators in the UK were told it was because of the relationship between News Corp and the gallery. The Daily Telegraph and Sunday Telegraph are media partners of the museum. We approached the Museum of Applied Arts and Sciences (the parent organisation of the Powerhouse Museum) for comment, and were told “the agreement with Victoria and Albert Museum, London advised MAAS to seek independent legal advice on content in the exhibition. As a result of the legal advice we received, two objects were removed from display.” 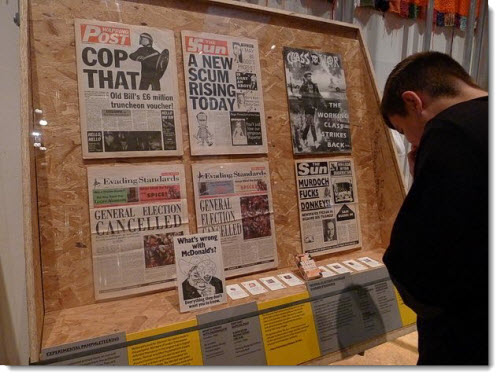 Get the party started. This invite arrived in Ms Tips’ inbox today, we wish we could attend to see this level of dance skills on display: 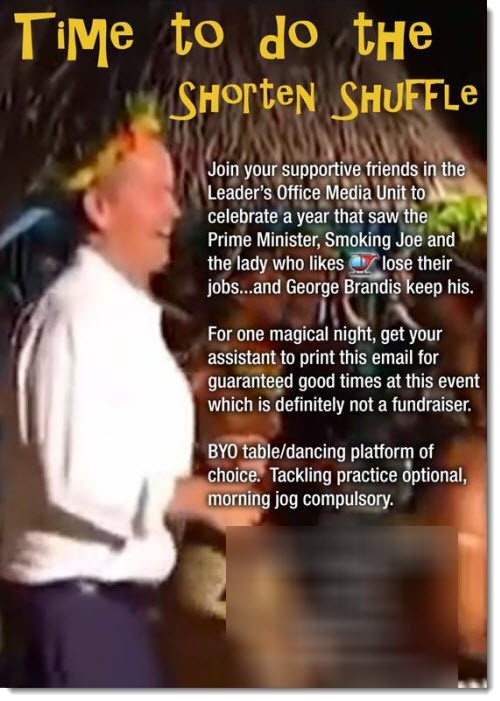 Indonesians warned about racist attacks. In the wake of the Paris terror attacks, Indonesian expats in Victoria and Tasmania have been warned against “anything that happens as a negative effect of these events” by the Indonesian Embassy in Melbourne. In a Facebook post on the embassy’s page earlier this week, a message (translated from Bahasa) gives Indonesians the emergency services phone number as well as contact numbers for the consulate:

“On the matter of the impact of the terrorist attacks in Paris, France on Friday, November 13, 2015, the consulate is urging the Indonesian community in Victoria and Tasmania to remain calm but be cautious.

“The Consulate General in Melbourne has co-ordinated with relevant parties such as the police to discuss negative impacts that might arise from these events.

“We ask that the Indonesian community not get involved if they are provoked by irresponsible parties as a result of the incident (in Paris).

“If anything happens as a negative effect of these events, please call …” 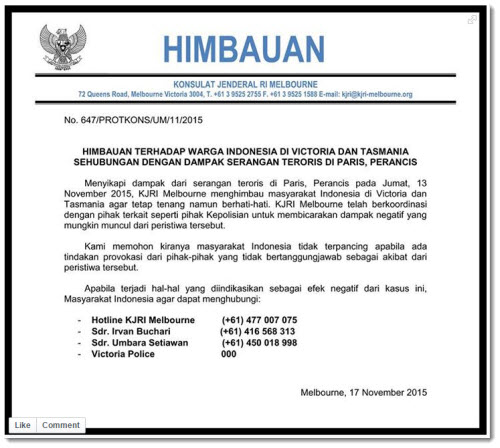 It appears as though the consulate is warning expats against racist incidents or reactions from the Paris attacks. We contacted the embassy to ask why it felt this warning was necessary, but did not respond to our requests.

The future of education. Is the Australian National University cutting down on actual human interaction between lecturers and students? A tipster tells us the university is looking at cutting back on lectures:

“One of the Australian National University’s DVCs (the DVC(A) has proposed getting rid of lectures. Formally, the proposal is ‘that by 2020: ​ANU focus its education activities on interactive classes; that live lectures be used in the first week of semester to welcome students and otherwise used only sparingly; and that staff be able to pre-record lectures appropriate for students to use throughout semester or in revision activities’. This followed a discussion with the ANU Senior Management Group summarised by the following: ‘Discuss the lecture attendance and downloads data with their college executive and education committees and provide advice to SMG 26 November 2015 on the role of lectures in ANU education, and in particular whether they should be phased out as a routine teaching activity by 2020’.”

But deputy vice-chancellor (academic) Marnie Hughes-Warrington tells us that the university isn’t looking to phase out lectures:

“The University is not planning to phase out lectures, but we are looking at how ANU students want to learn and what approaches create the strongest engagement between staff and student.

“I’ve recently blogged what we do know about lectures, which is that attendance declines over time.”

“Universities have to find new way of engaging students in the future, which means that what we recognise as a lecture now, will change.”

So students of the future will still have lectures, but who knows what that will mean?

Bolt the anti-racist. In yesterday’s edition of The Monthly Today, Richard Cooke explored the paradox of self-proclaimed anti-racist Andrew Bolt calling for fewer Muslim migrants. “How could I have failed so completely to convince so many people that I am actually fighting exactly what I’m accused of?” Bolt asked last year. Reading the comments on his blog, Cooke finds a kind of answer, where Bolt republished a comment from a reader who promoted the colonial riot police in Papua New Guinea:

“If the refugees fronted a Police Boi riot squad anywhere near as disciplined in earlier times, they would for sure clobber those thin middle eastern skulls …”

The praise of the other commenters (“Boink Boink Boink Boy thats a sound i would have liked to hear”) paint a less than savoury picture. If that’s the kind of comment that gets through moderation (which we hear from a tipster can be applied liberally), what doesn’t make it past the gatekeeper? We’d love to know.

Stop the lanyards? While most Defence materiel purchases are gone over with a fine-tooth comb (just don’t mention the F35s), we didn’t expect the lanyards distributed to public servants across Defence to be so controversial they were subject to a freedom of information request. From our friends at The Mandarin:

“What is a lanyard worth? About $0.70 if you buy 80,000 at once, as Defence recently did in an effort to make everyone under its big umbrella feel more unified.

“Thanks to an odd a freedom-of-information request from someone going by the name Paris — perhaps a rival lanyard supplier — we now know the department recently spent $56,434.40 on that big order of its new One Defence lanyards.

“As reported in the local paper last month, some Defence people had a problem with the little plastic safety clips that break open if the lanyards get caught. The lesson for all those in the lanyard game is safety breakaway clips best be located on the side, not around the back.

“The FOI disclosure also includes a quote for more of the same but with “adjusted breakaway clip location” at a bargain basement charge of $0.51 each including GST, for an order of 20,000. Upping it to 30,000 means the supplier could sharpen the pencil on that and get it down to 46-and-a-half cents a pop.”

All we know is that no amount of spending on lanyards will make them an attractive fashion accessory.

Does a neighbour make a friend?

Dangerous brinkmanship with Indonesia could have disastrous consequences

Perhaps lanyards are Weapons of Mass Distraction, hence the secrecy?
As for Blot’s flying monkeys “If that’s the kind of comment that gets through moderation … what doesn’t make it past the gatekeeper?” one only has to listen to his regular tongue baths with the Poison Dwarf (4 nights a week on radio HateCentral)to hear how even those who can manage a phone usually have to be cut off mid rant.
This Hobbesean (nasty, brutish & short) pair must be sooo proud.

The ANU tipster is not keeping up with their own university’s open discussion on campus fostered by its deputy vice chancellor (academic). It is not senior management which is phasing out lectures but students, by their staying away in increasing droves. This is not distinctive of ANU: lecture attendance is falling at other Australian universities and in the USA, Canada and the UK.

If Crikey can find a competent investigative journalist, there’s an enormous amount of data out there showing how “universities” and other learning businesses can maximise benefits to themselves and their bureaucracies by legally rorting the system and disadvantaging genuine competent students and staff.
But you’ve been told this before and you did nothing, did you.

I’ll bet the divine Rupert is a dual-passport holder. USA/Australia. It is to be hoped the QLD ex-walloper treats Murdoch to the same searching analysis refugees are forced to endure.

As for a’Bolt; the very people he targets are precisely the ones who move their lips when trying to read.