Major game publishers blacklist Kotaku. Plus other media tidbits of the day.

It’s about ethics in video game journalism (no, really). As an industry, video gaming is bigger than the movies. And the major companies that produce blockbuster video games control information around those games with ruthless precision. For the past year, the PR and marketing arms of some of the biggest video game companies in the world have been blacklisting Gawker site Kotaku, one of the world’s largest gaming publications, after it published leaked information revealing the existence of certain projects the companies had been developing.

This morning, Stephen Totilo, the site’s editor-in-chief, revealed to readers the existence of the information blackout, imposed on the publication globally (including its Australian arm) by Bethesda (publisher of multimillion-dollar franchises Fallout and Elder Scrolls) and Ubisoft (Assassin’s Creed). In a post this morning, Totilo says he tried to keep quiet about the total information blackout as he came to an arrangement with both publishers. But he’s given up, and he fears the practice is common among other gaming sites as well. Totilo writes:

“For the better part of two years, two of the biggest video game publishers in the world have done their damnedest to make it as difficult as possible for Kotaku to cover their games. They have done so in apparent retaliation for the fact that we did our jobs as reporters and as critics. We told the truth about their games, sometimes in ways that disrupted a marketing plan, other times in ways that shone an unflattering light on their products and company practices. Both publishers’ actions demonstrate contempt for us and, by extension, the whole of the gaming press. They would hamper independent reporting in pursuit of a status quo in which video game journalists are little more than malleable, servile arms of a corporate sales apparatus. It is a state of affairs that we reject.”

Smart money’s on Boris. At noon on Wednesday, Sportsbet opened a market on who will replace editor-in-chief Chris Mitchell. Crikey checked in with the betting company yesterday and was told about 20 people had placed bets, with 70% running the way of Daily Tele editor Paul “Boris” Whittaker, shortening his odds from $3.50 to $3. Another 20% of bets had been on Oz editor Clive Mathieson — his odds lengthened to $9 at one point but have drifted back to where they started at $5. The odds on Weekend Australia editor Michelle Gunn, meanwhile, have narrowed from $8 to $6.

No one had bet on an external appointment. — Myriam Robin

Catalano for Fairfax? It’s a big year for media moves, and while managing director Mark Scott prepares for a departure from the ABC, eyes are also turning to Fairfax, where CEO Greg Hywood has been in charge since early 2011. Which wasn’t that long ago, but hey, people get restless.

The Oz’s Margin Call column last week pondered whether Domain chief Antony Catalano might be being positioned for the CEO role once Hywood departs it. Catalano was the subject of a glowing (and very long) profile in the Fin a few weeks ago. Mind you, Weekly Review insiders were miffed he didn’t pay tribute to others who’d helped him establish the newspaper group eventually brought out by Fairfax in January this year. If Catalano does get the big chair it will be quite the reversal for Fairfax — when he started his competitor Weekly Review titles a very senior manager apoplectically announced to staff Catalano was “a turncoat and traitor” and “no friend to Fairfax”. Mind you, that’s all water under the bridge now. — Myriam Robin

Presidential reading material. According to yesterday’s Financial Review, Barack Obama was a little miffed at having to read about finding out about a lease to a state-linked Chinese company in The New York Times. He wanted to be told directly, but Prime Minister Malcolm Turnbull suggested he might find out more quickly if he subscribed to the NT News. So, naturally, the paper did this, and inside today’s edition, offered the US President a free digital subscription. Honestly we’d be disappointed if the NT News didn’t milk this for all it was worth … 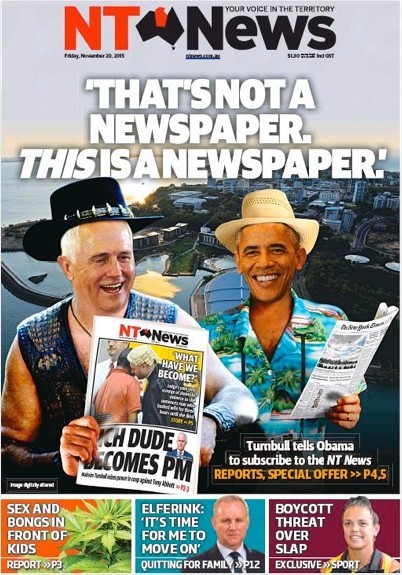 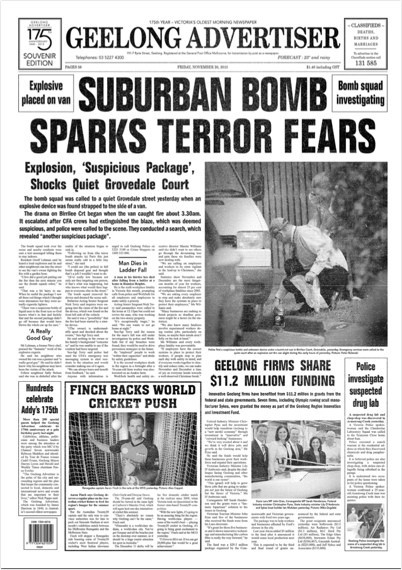