Lennon quits Unions NSW. Crikey understands that Secretary of Unions NSW Mark Lennon will announce tonight that he is stepping down from the role. It comes at an “interesting time”, one source told Crikey, Lennon has served in the role for many years, and it is understood that he wasn’t pushed. Lennon and his political “twin”, Michael Costa, were recruited to the NSW Labor Council in 1989 by then-secretary Michael Easson. It marked a sharp shift to the right by the trade union bureaucracy and an era of closer collaboration between opposition leader Bob Carr, the Labor Party headquarters in Sussex Street, then controlled by Labor Right’s Stephen Loosley, and the union leadership.

The two Young Turks ran into trouble when an economic research paper they had co-authored was “leaked”. It contained a flourishing promotion of right-wing theories on privatisation of public utilities, modernisation and anti-statism. In the resulting fury, calls went up for both authors to be expelled, but they pulled their heads in and survived. Costa became Labor Council secretary in 1998 and Lennon succeeded John Robertson in the position in 2008.

During his term in office, Lennon has escaped criticism from the Left and Right through shrewdness, agility and diplomacy. Even the employers’ organisations hold him in high regard, commending his “moderation” and his willingness to avoid sanctioning industrial action.

Truss in the Valley. While Malcolm Turnbull is completing his tour of international conferences, Warren Truss is filling in as acting Prime Minister in his absence. His duties brought him to the Latrobe Valley in Victoria, where local MP Darren Chester was effervescent with excitement about the new regional airport upgrade, along with the acting PM to open it. The photo of Truss conveys an entirely different mood though: 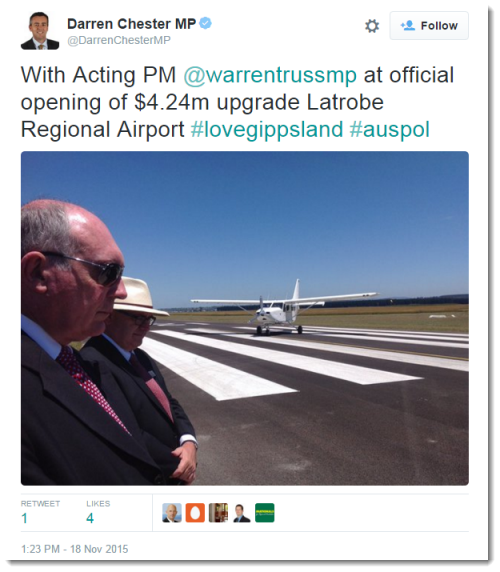 Men’s Day debate shafted. Today is the UN’s International Toilet Day, and unofficially, but acknowledged by some, International Men’s Day. The occasion will be marked in Australia with the Talk About Men Masculinity Debate in Sydney, as previously reported by Crikey. Discredited columnist Tanveer Ahmed was billed as one of the speakers for the debate topic “If masculinity is in crisis, what needs to change, men or society?” The event was previously scheduled to take place at ACON in Surry Hills, a HIV and LGBTI health promotion organisation, but the event was cancelled. ACON CEO Nicolas Parkhill told Crikey it was because of the speakers’ views:

“Several months ago, the event organisers hired one of ACON’s meeting spaces but at the time of hiring had not confirmed the speakers that would be taking part in the event. Then last week, various concerned community members complained about ACON hosting the event due to views about domestic violence that had been expressed by two speakers appearing at the event — Greg Andresen and Tanveer Ahmed. Following research and discussions with our partners in the domestic violence sector, we decided that the views of these two speakers on the issue of domestic violence did not align with our organisational values or our strategy to address domestic violence in our community. We then contacted the organisers and advised them that we could not proceed with the hire. The organisers agreed to secure another venue.”

The debate is now set to take place at the Vibe Hotel in Sydney, although a tipster says the hotel has received multiple complaints about hosting the men’s rights group. Vibe Hotel declined to comment on whether it had received complaints.

Gonski to the gallery? We’ve been told David Gonski, widely regarded as one of the powerful business figures in Australia, will be the next president of the Art Gallery of NSW board of trustees. If true, he would succeed Transfield boss Guido Belgiorno-Nettis, whose term expires next month. This would be Gonksi’s second term in the prestigious position, having previously held the presidency between 1997 and 2005.

We’re told Gonski coveted the job as chair of the Sydney Opera House Trust, but the position fell to Macquarie Bank CEO Nicholas Moore, a merchant banking friend of Premier Mike Baird. Throughout his legal and corporate career, Gonski has been a firm believer in correct corporate governance, and his talent would be much appreciated at the art gallery.

The gallery’s delayed annual report, published this week, shows that the number of curators and registrars fell from 52 to 43 from the 2012-13 financial year to 2014-15, while general staff numbers fell from 88 to 32.

South Africa-born Gonski, 62, is a former chancellor of the University of NSW and deputy chair of Frank Lowy’s Westfield Holdings. He became a household name after delivering a package of measures to accelerate school funding in 2011. Shortly after Tony Abbott’s election as prime minister, the Gonski report was removed from the government website.

Although there is a “back to the future” element to Gonski’s possible reappointment to a position he has previously held, we are told staff would welcome it, as they feel that the bureaucratisation of the gallery has removed a sense of imagination, excitement, vision and public participation.

The most wonderful time of the year. A News Corp tipster tells that us that the mood has not been improved at the Herald Sun after it was announced that the Christmas party picnic at Cruden Farm would still take place, but no boozy party in the CBD as has been held in other years. Matters weren’t helped by a post on the staff intranet crowing about the success of the Hun‘s Melbourne Cup marquee. According to a write-up seen by Crikey, “more than 300 advertisers and industry figures mingled in the Italian-themed Birdcage marquee over the four major race days”. But perhaps the lack of subs is having an effect on the intranet, which listed “Mayor Robert Doyal” as a guest at the marquee — we think they mean Melbourne lord mayor Robert Doyle, who used the paper to announce another tilt at the mayorship recently.

Time for a name change. While world leaders attempt to find a solution to the increasing problem of Islamic State (also called ISIS) in Syria, a Californian biotech company is also considering the fallout of the Paris attacks. Isis Pharmaceuticals, originally named after the Egyptian goddess associated with good health, has told CNN that it is considering changing its name, as the negative connotations have become overwhelming. Shares in the company dropped 4% on Wall St on Monday, but it’s not clear if it was linked to the attack. The pharmaceutical company isn’t the only one to share a name with the terrorist organisation — Australian building company Isis Group changed its name to the Shape Group, and British TV show Downton Abbey killed off the family dog called Isis.

What’s that spell? The Sydney Opera House website is currently advertising the Utzon music series to take place next year, but one of our tipsters (and quite a few in the Crikey bunker) had to look twice — thinking it was advertising something else entirely.

“South Africa-born Gonski, 62, is a former chancellor of the University of NSW ”

Jaysus, I should have known that, seeing as I work there. Website still seems to have the esteemed Mr Gonski as the Chancellor.

What have you heard?

It was interesting reading references back to the days when the NSW Labor Right produced intellectually competent leaders who wanted to improve society; but in fairness it should be pointed out that back then the Left did the same.
It’s not easy to accuse either Left, Right, or any other relevant bunch of powerbrokers doing that now, is it.