More trouble at the Art Gallery of NSW ... furious motorists come to blows over parking ... bad coffee at News Corp ...

Australia commits to open government, sort of. More than two years after the former Labor government said it was going to join the Open Government Partnership, the Turnbull government has begun the process of finalising our membership. The OGP is a group of, so far, 69 countries that all agree to be more open, accountable and responsive to their citizens. To be a member you have to go through a two-year action plan. Australia’s plan will be drafted, with public consultation, over the next few months, ahead of a launch in July 2016. A website set up to detail Australia’s work to date curiously mentions the establishment of the Office of the Australian Information Commissioner — which the government is trying to close — in 2010 as one of its achievements.

Given that the only thing keeping the OAIC open right now is the fact the current government doesn’t have the numbers in the Senate to pass legislation abolishing it, and there has been no change in policy after Malcolm Turnbull became prime minister, it is confusing as to why this was included. Perhaps there is change afoot?

AGNSW turmoil intensifies. A tipster tells us that tensions continue between the Art Gallery of NSW and its members’ organisation, the NSW Art Gallery Society, with things escalating this week. Art Gallery director Dr Michael Brand has insisted on having the final say over the selection of the society’s new executive director. The position fell vacant earlier this month when Judith White resigned. Society members are said to be furious with the director’s intrusion into their affairs. They fear the selection of a hand-picked CEO who will do AGNSW’s bidding. They believe the gallery’s long-term strategy is to bring the society under its control, thereby ending its 60-year independence. We have asked the Art Gallery of NSW if Brand would have the final say on the appointment, and if the gallery is committed to the independence of the society, and they responded:

“The appointment of a new director of the NSW Art Gallery Society is a senior and significant position and a critical appointment for both the Art Gallery of NSW and the Society.  The Society and the Gallery have agreed that the director of the Gallery will be part of this selection process.  The Gallery and the Society are committed to working together in the best interests of its members.  The Gallery has had a longstanding and close working relationship with Society and will continue to do so in the future.”

Yarraville parking dispute comes to blows. There’s fighting for democracy, and then there’s fighting for free parking. The gentrified inner-western suburb of Yarraville in Melbourne has for months been the home of a local council argument that could be sequel to The Castle. Maribyrnong Council recently installed paid parking meters in the suburb of Yarraville, a move that has put local noses out of joint, with the meters smashed and vandalised. Last night protesters took their anger out on the actual councillors, with councillor Grant Miles reportedly king hit after the meeting and councillor Nam Quach “body slammed”. The spokeswoman for the Yarraville Village Says No To Paid Parking group, Megan Darling, told a reporter that the group was similar to the Arab Spring:

“We applaud people in the Arab Spring standing up and saying this is not right. But when it happens in Yarraville, people say that we are yuppies.”

Bad coffee adds insult to injury. We hear that all is not well with News Corp staff in Brisbane. They’re concerned about the prospect of losing their editor, Chris Dore, just months after two well-liked baristas were shown the door (baristas and editors being equally important to the news-making business).

When and if Daily Tele editor Paul “Boris” Whittaker takes over from Chris Mitchell at the Oz, as is widely expected, it’s also expected that Dore will move to Sydney to take over Boris’ gig at the Tele. Dore has been at the Mail since 2013, and staff have been happy with the paper under his watch. But it’s not the only recent blow. Two highly regarded baristas at the building coffee shop have recently been let go, after the shop was taken over by chain Degani. So horrid is the prospect of sub-standard coffee that News Corp staff even started a petition was to get Sam and June’s jobs back. To considerable ongoing despair, it doesn’t appear to have had any impact yet.

We find your lack of faith disturbing. A concerned tipster couldn’t believe his ears on Monday during one of ABC Brisbane 612’s tribute to the victims of the Paris attacks, when he thought he heard the strains of the Star Wars Imperial Death March theme music in place of La Marseillaise. After Channel Seven used the Dutch flag instead of the French flag in one of its programs, it was not hard to believe that another media organisation could make a similar mistake. Ms Tips went to the tape though to check it out, and while similarities could be heard, ABC definitely played the correct song, and with the French lyrics. We’re sure many Brisbanites were wondering what had happened to their AFL team’s club song.

David Moyle’s extensive CV. Yesterday Ms Tips wrote that Kim Vuga, star of SBS’ Go Back to Where You Came From, and founder of the Love Australia or Leave Party, had told the ABC that her campaign would be managed by Townsville man David Moyle, who we noted had experience with the Townsville Ratepayers Association. A Townsville local has bearted Ms Tips for leaving out the juiciest details:

“Oh how Crikey cruelly diminishes the political experience of David Moyle when Ms Tips says his campaign experience ‘seems to be as chairman of the Townsville Ratepayers Association’. Well, yes, Mr Moyle is one of the founders of the TRA, regarded in some areas as a sox and sandals morning tea glee club, but Mr Moyle has far far more campaign experience than that, stretching back many years. You see, Mr Moyle is known locally, both in the local paper and in blogs – particularly the Townsville Magpie –  as the Lucky Starr of Politics,  a soubriquet in honor of Mr Starr’s catchy 1962 hit ‘I’ve Been Everywhere.’ Because, after a brief stint as a councillor on the now defunct Thuringowa Council, his search for further representative honours has seen Mr Moyle at one time or another belong to the LNP, and Katter’s Australian Party, actually occasionally running at state and local levels, alas with little (i.e. no) success.  So you have done Mr Moyle a grave slight with your flippant remarks, Ms Tips, such campaign experience should not go unrecognised. Shame! (Although your shame is nothing to the shame Townsville feels about Ms Vuga’s sudden rise to notoriety.)”

We stand corrected — Moyle’s CV is quite interesting. Speaking to Moyle this morning tells us that he’s not actually Vuga’s campaign manager at all, or a member of her party, but is advising her on issues and policies outside of her anti-Islam platform.

A nation of what? Liberal Democrat Senator David Leyonhjelm is the star attraction of a 10-minute video produced by the National rifle Association of America, where he warns Americans against adopting Australian gun laws. Anti gun-control Leyonhjelm tells host Ginny Simone: 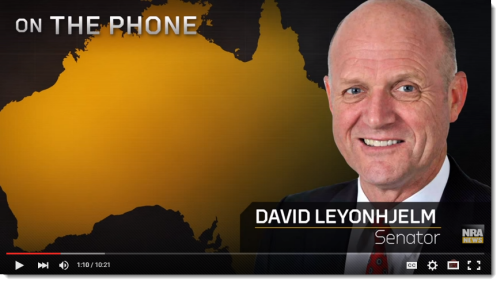 The rest of the video features footage from a 1998 video made by the NRA, interviewing Australians unhappy with the buy-back. It includes figures that have been promptly debunked by BuzzFeed. 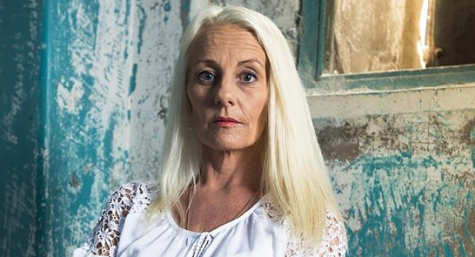 Tips and rumours: Love it or leave gets political

Makes me wonder how I’ve survived all these years without needing a gun and I am certainly refuse to be called a victim because of it!!!
There are no words!

Sunrise messed up, but at least they didn’t burn the Dutch flag instead of the French one, which Wollongong City councillors did on stage at a nighttime protest in the town centre against nuclear testing in the 90’s. Their promise of burning the French flag had been a big draw, but then they pulled out the Dutch one, and set it alight to cheers from the crowd. Apologies were made to the Dutch embassy in the days after.

SusieQ – makes me wonder just who elected this idiot RWNJ to the Senate in the first place!