Fairfax's "Sunrise strategy" has claimed its first victim. Plus other media tidbits of the day.

Golden sunsets follow the Sunrise. The first Age journo to put his hand up and be granted redundancy as a result of Fairfax’s Sunrise training initiative is senior court reporter Steve Butcher, who told editor-in-chief Andrew Holden he wanted to go at his one-on-one meeting. Media House insiders tell Crikey at least half-a-dozen other reporters have put up their hands for redundancy, though many are still waiting to hear back from management about whether they’ll be allowed to go.

In an email to his colleagues sent yesterday, Butcher wrote:

“The big blue Fairfax bus — with driver — has pulled up to collect me and chug off into that golden sunset. My last day is November 27. Further details to follow.

“In freedom from fear, I remain, for the time being, your faithful correspondent, S.Butcher.”

Meanwhile at Holt Street … News Corp, Crikey readers would know, is facing its own redundancy round early next year. But yesterday the company was in damage control mode after Fin Rear Window scribe Joe Aston suggested in the morning’s paper that editor-in-chief Chris Mitchell’s retirement was not quite of his own volition.

Mitchell had painted the decision as entirely his in his comments to Crikey, telling us:

“As Aston was told by his source, I advised the company earlier this year of my intention to retire from this role at some point in the future. As yet there is no decision on a finish date or on my successor.”

Mitchell added that he expected to have some ongoing role in the business, which, by Tuesday morning, Aston reckoned was unlikely, as, Aston claimed, the company was keen to see the back of the long-serving editor.

“It will be interesting to see if [Mitchell’s] plan to wield power beyond the grave actually eventuates. As [former News Corp Australia head] John Hartigan … found out the hard way, once you leave, you leave, and hand back your protected species credentials when you collect your gold watch — or, in Mitchell’s case, a lovely piece of art presented to him at a Holt Street reception in August, in the least subtle nod towards the News Corp exit since Col Allan turned up in 2012 to provide ‘additional editorial leadership’ just weeks before Kim Jong-il [Aston is referring to Kim Williams] bit the dust.”

But Aston hadn’t gotten his facts quite right — as he admitted later that day, correcting the online copy. The aforementioned painting was presented to Mitchell in February at Lachlan Murdoch’s house. This wasn’t enough for Mitchell, who sent his new media editor Darren Davidson to relay his displeasure.

“Typically, Joe Aston didn’t ring anyone before writing his incorrect and defamatory item. My colleagues at the paper and News Corp know it was entirely my own decision to retire,” Mitchell said in an item posted on the Oz’s website yesterday afternoon.

Meanwhile, News Corp’s new chief executive Peter Tonagh sent an email around to the troops saying Mitchell had communicated his decision to retire in September, and expressing the company’s regret.

“While we are disappointed that he will be leaving us, we of course respect Chris’ decision to devote more time to his family after many years of dedication to News. During his time as editor-in-chief, the Oz has flourished and is now deeply ingrained as a critical part of the national discourse.”

It’s worth nothing this missive was sent out only in the voice of Tonagh, and not of News Corp Australasia executive chairman Michael Miller. The two New Corp execs were ridiculed last week for issuing a press release that listed them both as the originators of several choice quotes. — Myriam Robin

Chinese government articles, sorry, ads, in the Fairfax press. The Russian government has been buying ad space to insert news-like features into Fairfax papers for a while, so perhaps it’s no wonder other countries are getting in too.

A full-page ad on page 12 of today’s Sydney Morning Herald features news direct from the Xinhua News Agency, the official press agency of the Chinese government. The strapline above the ad describes it as a “Special Advertising Feature by Xinhua News Agency” …

“We’ve taken a very robust line in our news and opinion pages on the actions of the Russian government … We’re distributing a publication produced by Russian organisations about Russia, that in no way affects or influences the editorial independence of The Age or the Sydney Morning Herald. And I think our readers know that, and the publication is adequately labeled so that the reader is in no doubt as to the distinction of this advertising supplement. “

Sliding doors. Fairfax’s Ben Grubb is the latest of Australia’s tech writers to recently move into PR or away from the tech writing scene. He announced yesterday he was moving to Melbourne PR and equity-raising firm Media and Capital Partners, and he’s far from the first tech writer to be gobbled up. The firm has also, in recent months, hired former Oz tech journo Fran Foo, news.com.au tech reporter Andrew Ramage, and Technology Spectator writer Harrison Polites, and is headed up in Melbourne by former Fairfax tech editor Asher Moses. Meanwhile Gizmodo editor Luke Hopewell has been hired by Twitter to curate its new “Moments” feature. In February, the Oz’s long-serving tech editor Stuart Kennedy left after no fewer than 12 years at the helm — the Oz‘s tech section has since been supplied by Tech Spec. And ZDNet’s former journo Josh Taylor has, of course, been lured away from writing about tech by Crikey. It’s something of a changing of the guard, though given the cost-cutting at many major publishers, one wouldn’t count on all being replaced. — Myriam Robin

Charlie Sheen’s pension. Memo to Channel Seven News: if you’re going to use the word “penchant” to sound all fancy, you better learn how to pronounce it correctly. Otherwise, you’ll likely do what you did last night and tell the world that the “troubled” HIV-positive actor Charlie Sheen has a “pension” for sex and drugs. Which we believe to be incorrect — or, if not, desperately unfair. — Guy Rundle

Front page of the day. A warm welcome … 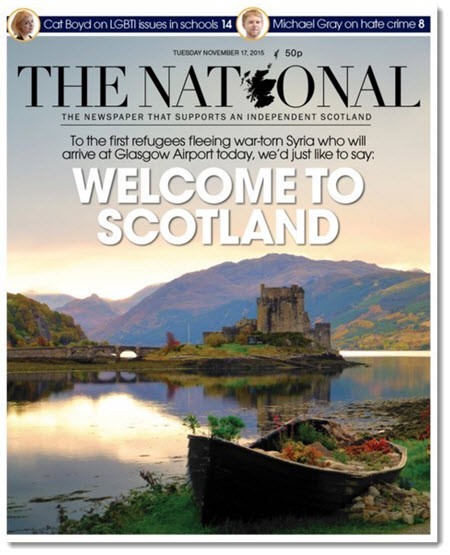