All eyes were on Paris this week.

Any talk of tax reform retreated into the shadows following the Paris terrorist attacks, with Prime Minister Malcolm Turnbull already in Berlin for the G20 and signing a treaty with Germany to deal with double taxation. Turnbull moved onto the APEC summit in the Philippines, yesterday meeting US President Barack Obama and reportedly agreeing that troops on the ground are still not an option in Iraq and Syria. Turnbull of course decried the violence in Paris, but continued to talk positively about building bridges with the Islamic community to prevent the radicalisation of young people. Turnbull reportedly accepted an early invitation to visit Washington sometime this summer from Obama.

Foreign Minister Julie Bishop joins Turnbull and former prime minister Tony Abbott in the top three of our index this week, jumping up seven places after the attacks. She said she hoped talks between Russian President Vladimir Putin and Obama would lead to a single, global coalition against the terrorist group. Turnbull has been criticised by Tasmanian MP Andrew Nikolic, former Defence Minister Kevin Andrews and Abbott after removing Immigration Minister Peter Dutton from the National Security Council, while NSW Premier Mike Baird is up six places into fifth as council mergers loom and he rejects an ICAC push for more lobbying transparency. Minister for Resources Josh Frydenberg says planned climate change talks in Paris must go ahead following the attacks and released six shortlisted nuclear waste sites last week.

Former Employment Minister Eric Abetz is calling for Bishop to explain why her chief of staff was present when it was decided Turnbull would challenge Abbott’s leadership. Everyone knows that night’s episode of 60 Minutes was very enticing. 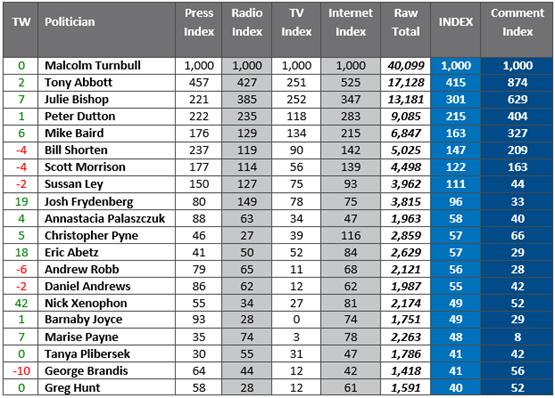 While talkback was firmly stuck in the past and reliving the Liberal leadership spill.