Shorten suffers a spill. No, not that kind of spill, an actual spill of coffee — a short black, in fact. It’s been confirmed by Bill Shorten’s office that the opposition leader crashed his mother’s car into a row of parked cars in Pigdon Street, Melbourne on Sunday afternoon after spilling a short black in his lap. News site The Vine reported the news with the joke “it’s still unknown if Mr Shorten will be grounded by his mum,” neglecting to mention that Shorten’s mother, Ann, passed away more than a year ago. They’ve since apologised, writing:

“Please note, due to our quick reaction on this story, we failed to realise the passing of Bill Shorten’s mother. We apologies to anyone offended and have edited the post accordingly.”

Forever young. While fans of Insiders have been used to the face and voice of George Megalogenis for years, the judges at the Logies are a bit slow to join the Megalogenis fan club. The journalist and author has been nominated in the “best new talent” category for Australian television’s night of nights, for his role as writer and presenter of the series Making Australia Great. 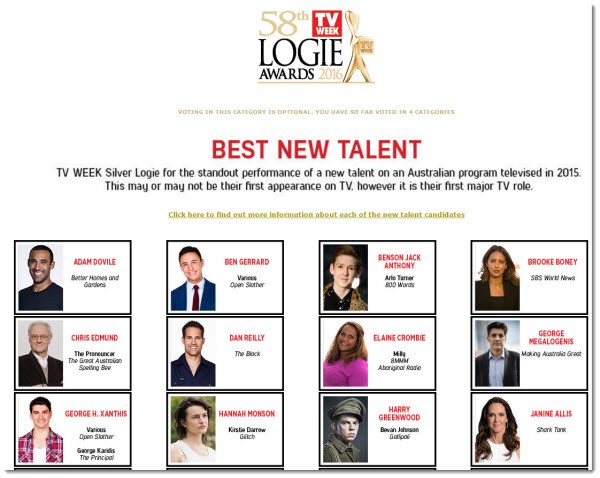 Tweeting about the nomination, Megalogenis said “do they realise I’m almost as old as Bert Newton?”

Never too late to be a “new talent” — the full list of nominees (and the chance to vote) is here.

Love it or leave gets political. Controversial star of SBS’ Go Back to Where You Came From Kim Vuga has announced that she is starting her own political party, imaginatively called the Love Australia or Leave Party. Vuga told the ABC’s Tom Iggulden that “Islam is on trial right now, in Australia and globally” and that she was already looking at preference deals with her campaign manager, David Moyle from Townsville. Moyle has experience with campaigns, Vuga says — which seems to be as chairman of the Townsville Ratepayers Association.

Also on the topic of new political parties, right-wing bloggers and columnists have been frothing at the mouth today after reports that Sydney man Diaa Mohamed is launching a political party to represent Australian Muslims, called the Australian Muslim Party. This morning Andrew Bolt blogged: “This party will represent Muslims against the rest and will inevitably trade in grievances, real or imagined.”

As it stands, there is currently two parties registered with the Australian Electoral Commission with the word “Christian” in their name — the Australian Christians and the Christian Democratic Party, while the Australian Liberty Alliance lists stopping the “Islamisation of Australia” as one of its key policy areas. So trading in grievances, real or imagined, isn’t anything new.

Alert but not alarmed. How safe are we as we are watched over by the loving grace of surveillance authorities? Not so much, if an interview by the ABC’s Fran Kelly with Paul Jevtovic, CEO of AUSTRAC, the agency that tracks funds possibly going to terrorist outfits, is any guide. What sort of transactions constitute a red flag, Kelly asked, with the answer leaving little to the imagination:

“Well if all of a sudden person X was  to go to their bank and close all their accounts and they might say something to the bank teller or to one of the bank employees indicating that they’re moving to a particular part of the world, that is one indicator amongst many,” said Jevtovic.

‘That’s a fairly random act though” said Kelly, after the briefest of pauses. Random? We hope that someone emptying their accounts and openly saying they are moving to a country where extremism is known to be a problem raises more than one red flag.

Never tweet. Following Crikey‘s confirmation yesterday that The Australian‘s editor-in-chief, Chris Mitchell, would be stepping down from the role, the (crowdfunded) Labor Herald‘s Twitter account reacted with this tweet, which was then quickly deleted: 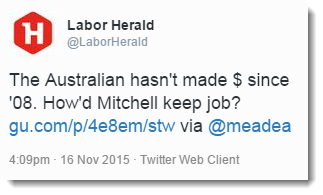 We’re not sure how the Labor Herald‘s funds are going, but glass houses and stones come to mind.

Tips and rumours: Imagine there’s no tax on religion

According to Roy Morgan TV Week is only read by 2.4% of the population. How does the publisher justify the cost of these awards?

Considering the readership fell by 5.6% in the last 12 months it doesn’t appear to be an effective marketing exercise.

Bill’s just gone up a few points in my estimation. He drinks his coffee short black.

Perhaps “That’s a fairly random act though” said Kelly,” Fran was using ‘random’ in the kiddies’ sense of ‘utter brain dead stupidity’?
Assuming that Jevtovic wasn’t just making it up to try to mislead the public that AUSTRAC doesn’t routinely hoover up every transaction.
As grundle suggested above “whether mass surveillance isn’t overwhelming agencies with information ” which, given the robust success of the agency in doing anything useful to man or beast, rates a Q.E.D.