Although most Australians have embraced credit and debit cards -- along with cash-free payment apps -- they are not ready to let go of cash.

Although there are a variety of ways people now choose to make payments, including PayPass, credit card, phone payments and even Bitcoin, a majority of people in Australia still believe there will always be a place for cash., today’s Essential Report reveals.

In the Reserve Bank of Australia’s annual Payments System Board report tabled in October, the RBA stated that there had been a continuing trend of Australians moving away from using cash for payments. In 2014-2015 the number of ATM withdrawals fell by 5%, and the value of those withdrawals — i.e. how much cash was withdrawn — fell by 2%. It has been an ongoing trend since 2013, which the RBA has stated is “likely to reflect a number of factors, including consumers’ adoption of new technologies such as contactless card payments that, like cash, provide for relatively quick transaction times”. 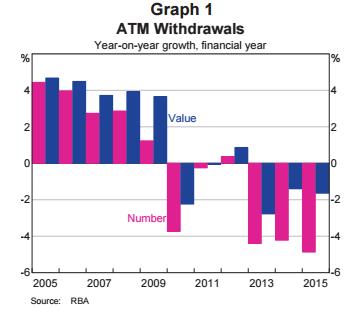 The average Australian made 400 non-cash transactions in 2014-2015, mainly through credit and debit cards, accounting for 22.9% and 42.5% of all non-cash transactions, respectively. The move for Australians to shop online is also a factor, but the RBA insists that “cash remains an extensively used payment method, particularly for low-value transactions”.

Australia is more advanced in payment options than other parts of the world, particularly the United States, where, before Apple got in on the payments game, it was a rarity to be able to tap and pay using cards, or even chip and pin, with consumers still using the old vulnerable magnetic strips. The RBA has said the benefits of the shift to contactless payments for retailers are an estimated 10% to 20% lower resource cost for contactless payments compared to when a customer has to enter a PIN or sign for payment.

There is also a proliferation of apps that bypass the use of cash, mainly for food, such as Menulog, PayPal and Hey You, but despite the wide array of options people have to avoid using cash and the rate of decline in the use of cash, Australians are not yet ready to give up the habit. In response to a question from Essential, 56% of Australians said they believed cash would always be needed for some transactions, with just 34% stating cash would not be necessary in the future.

Q. Do you think that at some time in the future, cash will be unnecessary and all transactions will be conducted with eftpos/credit cards?

This comes in defiance of what many in the industry suggest. In September Westpac released its own survey of “smartphone users” (in selling its Hey You partnership) that found over half of payments made in Australia are cashless, and respondents believed most Australians would be 90% cash-free by 2027.

Visa’s head of emerging products and innovation in Australia, New Zealand and the South Pacific, George Lawson, told Crikey in a statement that Australia was one of the most developed nations in using electronic payments, and over six in 10 face-to-face Visa transactions now used the tap-and-pay technology: “People choose to pay using contactless because of speed and convenience,” he said. “Contactless transactions have proven to be around three times faster than paying by cash. The next logical step is moving from paying with plastic to paying with your smartphone. Experience has shown when new technology comes along that makes something easier or more convenient, people will change.”

The Reserve Bank of Australia isn’t counting on the death of cash any time soon, however. In a speech in London in July 2014, the RBA’s assistant governor for financial markets, Guy Debelle, said the death of cash had been long foretold:

“As Mark Twain might say, cash has turned up at its own funeral quite a few times. Notwithstanding many innovations in payments technology, cash is hanging in there. Another paper-based transactions medium, cheques, are clearly on the way out, but cash doesn’t seem to be going that way yet.

“I think the digital threat to the future of money is very much a micro story, not a macro one. More electronification seems certain, though even then, I can see cash hanging in there. I am not willing to say ‘no future for cash’, or book a ticket for its funeral on my mobile payments device. The macro story is a clearer picture. The transmission mechanism might change, but the principles and overall framework are likely to remain intact for a while to come.”

Young people have gone bonkers for buy-now-pay-later services, making cash look even more like a loser.

For decades, economists have pondered the seemingly impossible benefits of negative interest rates. With the rise of the cashless society, the dream is looking more and more possible.

Blue chip investment giant Perpetual Ltd's flirtation with trying to enhance the return on its boring cash funds has come home to bite it badly with a sharp rise in losses in the past few weeks to $18 million, writes Jeff Wall.

Crikey needed a survey to learn this? It’s Crikey, so the answer is probably yes.

Thanx for this. 2 things influence my decision on whether to pay for goods in shops in cash or electronically. First, what seems to be generally socially acceptable. German shopkeepers seem to expect cash for payments at least up to 20 Euros and probably up to 50 Euros. A hotel keeper seemed to look askance to me when I proffered my card to pay for a nite’s accommodation. In contrast, Canadian shopkeepers seem happy to accept card payment for a few dollars.

Secondly, my perception of transaction costs. With banks charging electronic transaction processing fees of from $1.50 to $3.00 I get the impression, as inflated as those charges undoubtedly are, that it is inefficient to pay electronically any charge < $10.

Physical money will always be around. The next version of cash will have an embedded chip and it will be able to “talk” to the cash register. We will then have Throw and Pay as in Throw your money away.

Gavin – think of the first scene in The Big Lebowski when the StonerKing in his dressing gown pays for a carton of milk with a cheque for 69 cents.