Essential: can the Turnbull magic cover the Liberal Party’s flaws?

Voters' perceptions of the Liberal Party may be holding the government back from capitalising on Malcolm Turnbull's popularity, this week's Essential report finds.

If there’s one thing clear from all of the polling since the ouster of Tony Abbott, it’s that Malcolm Turnbull is vastly better regarded by voters than Bill Shorten — an assessment that, even if you catch Shorten at his best, isn’t surprising when comparing the two leaders head to head.

But Turnbull’s popularity is only getting the Liberals so far, today’s Essential Report suggests. On voting intention, the Coalition only leads Labor 52%-48% on a two-party preferred basis — a lead far smaller than Turnbull’s massive dominance as preferred prime minister would suggest. Indeed, this week Labor has picked up another point on its primary vote to move to 36%, compared to the Coalition’s 45%.

Why isn’t the stratospherically popular Turnbull pulling his party up with him? Because, Essential’s polling suggests, it’s carrying more baggage than just Tony Abbott. This week Essential has looked at party attributes and how they’ve changed since the Turnbull ascendancy. The most obvious change is that, compared to September last year, voters now regard the Liberal Party (56%) almost as divided as Labor (58%) — a big but understandable change from before. But consider the different perceptions of the parties: 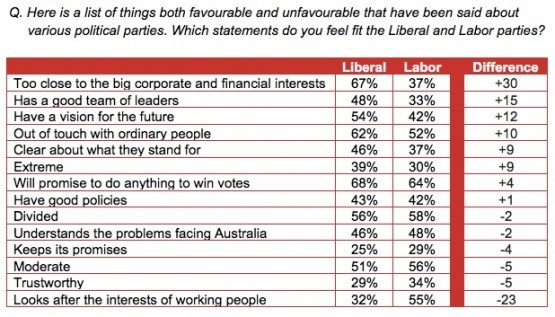 The Liberals have a big problem with being perceived as too close to corporate interests — unsurprising given the extent to which crony capitalism marked the Abbott government’s economic policies. The Liberals also trail Labor badly on looking after the interests of working people, and are regarded as more out of touch. But the Liberals lead on leadership and clarity of vision, suggesting that Labor under Shorten is still failing to convey a coherent overall message about what it wants to achieve. On the other hand, Labor will take heart from the Liberals being regarded as even less trustworthy than themselves.

Another shift might also point to why the government is struggling to convert Turnbull’s popularity into a stronger lead. Asked which issues are most important in deciding how they vote, voters put the economy (47%) only narrowly ahead of the health system (46%). Both issues are down since the question was last asked in early 2014, but the economy is down by more. But “Australian jobs and protection of local industries”, at 39%, is up since 2014. This helps explain why Labor has been at such pains to use the China-Australia free-trade agreement as an issue about Australian jobs, while the press gallery, rather cluelessly, has negatively assessed that stance in a Canberra bubble that has anything tagged with the words “free trade” as automatically good and popular.

And one of the biggest changes since 2014 is on an issue where the government has also been on the back foot — “ensuring a fair taxation system” has gone from being identified as important by 20% of voters last year to 30% this year, almost certainly because the likes of Labor MP Sam Dastyari, aided by excellent journalism from the likes of Michael West at Fairfax, have assiduously exposed the rampant rorting of our tax system by multinationals. Security and the war on terrorism has also surged as an issue of importance, by 12 points, but still only ranks seventh in importance.

Only 8% of voters think asylum seekers is a key issue. But Essential finds that 29% of voters still think Australia is too soft on asylum seekers, including 28% of Labor voters and even 13% of Greens voters.

The relevant question is how much longer — if ever — before the Crikey Commissariat manage to enter the real world of Planet Earth.

The Essential poll results seem to be much more rational than the other polls out recently.
Some have the Coalition ahead by 10-12%, which appears daft considering they haven’t really changed any policies or introduced anything new (apart from removing dames and knights, which is hardly significant in the scheme of things)!
Maybe the honeymoon is just a little longer than was thought probable!!

I am sick and tired of poor polling methodology from Essential encouraging more human rights abuses against asylum seekers. It is very well known (and Essential should certainly know this) that how people respond to a question in an opinion poll is very strongly influenced by the language used and how the question is framed. Words like ‘tough’ and ‘soft’ are not at all neutral – especially in politics. Politicians invariably want to look ‘tough’ and never want to look ‘soft’, and similarly most voters will be more likely to support something labelled as ‘tough’ rather than soft.

Using phrases like ‘tough’ and ‘soft’ is a highly non-neutral way to phrase the question, just like using a word like ‘sadistic’ would be. I appreciate that in this instance, it is difficult to come up with neutral words, but there are better words than ‘tough’. For example ‘harsh’ or ‘severe’ would make more sense. Alternatively, Essential could conduct polls with separate words, and compare the results. At the very least, Essential should acknowledge the issue so that their results are interpreted accordingly.

Turnbull will require more than charm when peddling LNP policies prior to the 2016 election.

It will be vital to keep a straight face although his years as a barrister should prove invaluable ie: putting a credible case for something his gut says is wrong.

I’m surprised Turnbulls popularity is not higher…it’s like the love you feel for someone who has rescued you from a car crash..question is come election time can the not Tony factor hide the fact that the policies are still mostly Tonys ..?