Bjorn Lomborg a big fan of recycling ... first they came for Call of Duty ... Nauru Facebook page shut down ...

Reduce, reuse, recycle. While the Turnbull government has scrapped plans for Bjorn Lomborg’s $4 million Australian Consensus Centre , the controversial “sceptical environmentalist” still gets a regular run in The Australian. This weekend Lomborg used an op-ed in the paper to argue that like the 20 COP meetings before it, next month’s Paris conference would be unlikely to render any specific outcomes for the environment. Twitter user Ketan Joshi picked up that while Lomborg is arguing against trying the same methods for fighting climate change, he used the same methods to argue his point as he used this time last year — reusing slabs of a piece he wrote in Canada’s The Globe and Mail in December last year, in which he argued that last year’s UN Climate Summit in Lima “achieved little”. In the first piece, Lomborg writes:

“The UN Climate Summit in Lima achieved little, just like the previous meetings for more than 20 years. As the saying goes, ‘insanity is doing the same thing over and over again and expecting a different result.””

And in the Oz over the weekend:

“This is the conundrum: we know climate change is a problem, but we sadly keep trying to solve it with a solution that has failed repeatedly. As the saying goes, ‘insanity is doing the same thing over and over again and expecting a different result”.”

In the Globe and Mail:

“An excellent illustration of the way progress occurs is the development of computers since the 1950s. We did not develop computers by subsidizing and mass producing vacuum tubes in the 1950s. We did not provide massive subsidies so all westerners could have a humongous computer in their basements by 1960. We also did not tax alternatives, such as typewriters. The development came singularly from a massive investment in R&D, lead by the space race, which led to transistors, integrated circuits, hard disks and all the other breakthroughs innovations that made it possible for companies like IBM and Apple to produce computers that the consumer actually wants to buy.”

“A lesson on innovation can be found in the computer. We did not obtain the computers of today by mass producing them in the 1950s to get cheaper vacuum tubes.

We did not provide heavy subsidies so that every Westerner could have one in their home in 1960. Nor did we tax alternatives such as typewriters.

The breakthroughs were achieved by a dramatic ramping up of research and development, leading to multiple ­innovations, which enabled ­companies such as IBM and Apple eventually to produce computers that consumers wanted to buy.”

In the Globe and Mail:

“A German parliamentary commission has analyzed the effects of Germany’s large green venture, the so-called Energiewende. The commission unambiguously concluded that the subsidies do not create green innovation, because it is much safer for companies to keep relying on heavily subsidized wind turbines, solar panels, and biomass instead of further developing existing technologies and develop new, viable alternatives to fossil fuels. The subsidies simply create the wrong incentives, and the commission “found no positive correlation between subsidization and innovation in any technology sector.”

“However, a German parliamentary commission looked into the question and unambiguously concluded that the subsidies did not create green innovation because it was much safer for companies to keep relying on heavily subsidised wind turbines, solar panels and biomass instead of further ­developing existing technologies and develop new, viable alternatives to fossil fuels.

The subsidies simply create the wrong incentives and the commission concluded they “have failed to reveal significant positive innovation impacts”. Subsidised deployment is clearly not the way to create the needed innovation.”

We contacted Lomborg for comment, but didn’t hear back by deadline.

Call of Duty safe. In the latest “tranche” of national security legislation introduced into Parliament last week, the government will be amending the Classification Act to have publications, films, or computer games that directly or indirectly advocate a terrorist act to be banned or “refused classification”. But we are informed by the Attorney-General’s Department, however, that video games, in which you play a character that is part of a terrorist organisation or has infiltrated a terrorist organisation — such as Modern Warfare 2 — will not be banned under this legislation.

Asylum seeker page goes quiet. A Facebook page run by asylum seeker children detained on Nauru and featuring their stories has had a fleeting online presence, after Facebook demanded to know the true identities of the page’s administrators. Free the Children NAURU went online late last week with photos and stories from children on Nauru, flouting a ban on Facebook in the island country. The page included stories like that of Salam, whose story says he fled Syria with his family in June 2013 as a six-year-old and traveled to Australia by boat from Indonesia: 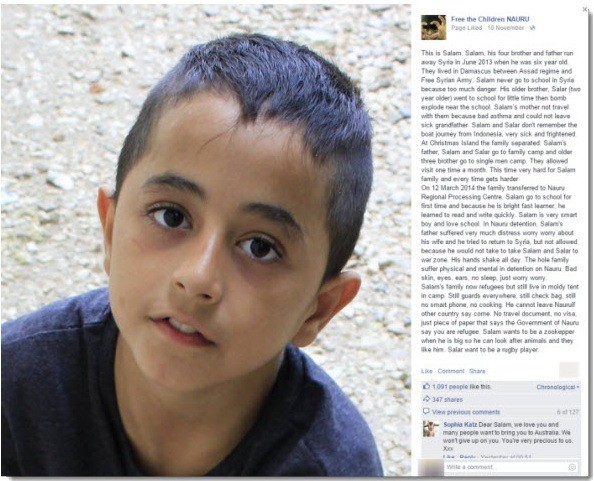 Yesterday the page was updated by one of the adult moderators to say that the children in control of the page could no longer access it, as they had not provided their identities to Facebook, and could not do that “for fear of dire repercussions from Australian Border Force and the Nauruan Police. Facebook is illegal in Nauru and the smartphones from which they have managed this page are considered contraband in detention.”

Comments and messages to the page have been shut down on the page and the post included a message from a child referred to as “lil one”:

Nats and Indi. After months of delays in announcing their candidate for the seat of Indi, the Nationals have named Marty Corboy as the man to take on independent Cathy McGowan at next year’s federal election. Corboy will also be up against the Liberals’ Sophie Mirabella, who was ousted from the previously safe seat in north-east Victoria at the last election. We previously reported that the Nats had been courting big names to run for the seat, and the Wangaratta Chronicle even reported that ex-footballer Adam Goodes had been approached, but with little success. Corboy was on the Nationals Senate ticket for the 2013 federal election and lost preselection for the Victorian seat of Euroa to Steph Ryan last year.

We understand that McGowan has already started to fundraise for the campaign, and she was quoted in the Border Mail have a gentle dig at Mirabella after Corboy’s announcement:

“Just watching the Liberal candidate, we’ve seen more out of her in the last two months than in the 12 years she was a member.”

The most wonderful time of the year. There are Christmas decorations in the shops and fruit mince pies in the bakeries, which means it’s that time of year again — time for the 2015 Crikey Awards. This year we are taking suggestions from our dedicated subscribers for the four categories of awards, and we’d love to hear from you. Who will be Crikey’s person of the year or take home the coveted prize of arsehat of the year? Some pundits have named Malcolm Turnbull a PMILF  — will that mean he will take back his crown as sexiest male politician after last year’s upset from Scott Ludlam? And will Tanya Plibersek reign as Plibersexy? You can send us your suggestions for the shortlists here (categories are Person of the Year, Sexiest Male Pollie, Sexiest Female Pollie and Arsehat of the Year).

Crikey, do you expect us to be horrified that the Oz published : “Germany’s … subsidies do not create green innovation … instead of further developing existing technologies and develop new, viable alternatives to fossil fuels” ?

Instead, perhaps it is something we should consider seriously. Farms, mines, fisheries, forestry… all rely on diesel. How is Australia’s primary industry to function without (fossil) diesel fuel in our decarbonised future?

Bjorn Lomborg’s just wrong. Innovation is expensive. Innovative technologies came just by manufacturers putting their products, inadequate as they were, on the market. The first IBM personal computers and Apples weren’t very good, and were also very expensive, and development relied on consumers wanting to be first users of new technology willing to buy the products.

Innovation doesn’t stop with renewables. Anyone who can work out how to do it more cheaply and more effectively will do well.

The Free the Children NAURU Facebook page is still running, thanks to an Australian who offered to be named as the page administrator.
https://www.facebook.com/Free-the-Children-NAURU-839867502797443/?fref=nf

leone, on the internet there’s rarely a problem about running nonsense, is there. just look at Crikey.

Yes, you’re right. There’s no problem running nonsense on the Internet. We only have to look at your comments.

Your latest comment is irrelevant. A non sequitur. The item was referring to Facebook wanting to remove a webpage because the children running it were unwilling to identify themselves, fearing that they’d suffer repercussions from the authorities on Narau.

Leone had noted that the webpage was still running as a result of an Australian adult volunteering to act as the site’s administrator.

There was nothing concerning quality either in the original item or the subsequent comment.