Walkley-award winner Paul Whittaker is tipped to be the next editor of The Australian.

Over the past week, senior staff at The Australian have been told that editor-in-chief Chris Mitchell will be vacating his role in coming weeks, Crikey understands.

As first reported by Joe Aston in The Australian Financial Review this morning, Mitchell is expected to be replaced by Paul “Boris” Whittaker, the crusading editor of The Daily Telegraph, a man who regularly outrages liberal-left opinion leaders perhaps even more than Mitchell.

Asked whether he wished to comment this morning, Mitchell told Crikey: “I advised the company earlier this year of my intention to retire from this role at some point in the future.” But he took objection to the Fin’s characterisation that he would be “leaving the building by Christmas”. “I expect to have an ongoing role on the paper and with the company,” he said.

“After 42 years in the business and 24 as a daily editor I am sure all my staff will understand my decision.”

“As yet,” Mitchell said, “there is no decision on a finish date or on my successor”.

But Crikey hears from multiple sources that 45-year-old Whittaker is the clear favourite to take over. Whittaker, who is known in Sydney media circles as “Boris” due to his physical resemblance to German tennis star Boris Becker, has been editing the Daily Tele since 2011, where he’s earned a fearsome reputation for a willingness to make life hell for state pollies and figures like progressive Sydney mayor Clover Moore. He was awarded a Walkley last year for headline writing and has been lauded by Tony Abbott for his “decisive role” in securing Sydney a second airport. But he is perhaps best known to the general public as the man behind splashes like these … 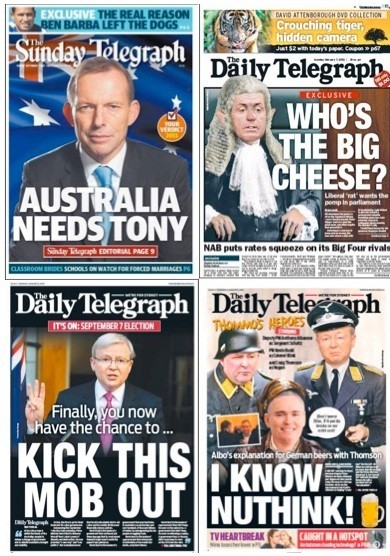 Perhaps because of its partisanship, the Tele is Australia’s least-trusted paper, surveys have shown for many years.

But among journalists, even those generally critical of News Corp do not dismiss Whittaker as merely an attack dog. Last year’s Walkley was far from his first. He’s won three others, of which two were for investigative journalism. One was shared with Hedley Thomas, his brother-in-law, for exposing the Net Bet affair. Also mentioned to Crikey as proof of Whittaker’s journalistic chops was his was “terrific” investigative work on the death of model Caroline Byrne.

What would Whittaker be like as an editor-in-chief? Most expect he’d be very much in the Chris Mitchell mould. “He learnt how to put a newspaper together by sitting at Mitchell’s feet,” said one insider. Like Mitchell, he’s seen as a warrior who likes taking strong editorial positions and attacking the paper’s enemies. He’s also seen as a company man — utterly loyal to News Corp and Rupert Murdoch.

How Whittaker’s ascension affects the alignment of power at The Australian remains to be seen. The Oz’s editor Clive Mathieson, who keeps the paper chugging along (“he runs the place day-to-day,” said one reporter), has worked under Whittaker before; from 2007 to 2011, Whittaker was the editor of the Australian. As has John Lehmann, who was recently poached by the Oz to become deputy editor, leaving the Tele, where he had been editor-at-large.

Mathieson quits The Australian, after missing out on ABC gig

Simons: Dear (Media) Diary, you are just so predictable …

Circulation of the Tele has fallen heavily under the editorship of Paul Whittaker, as he has chosen to concentrate on issues that might excite him but hold little interest for the Tele’s readers. At the same time, the Tele’s digital side including the website doesn’t even rank in the top 10 Australian news publications. The sort of stories Boris goes for just don’t interest a digital audience. I suppose it makes sense then putting him in charge of a paper like The Oz where circulation and digital eyeballs don’t seem to matter.

What a disappointment for rational subscribers that he isn’t taking over Crikey, which needs him far more than where he’s going. It was bad enough on Crikey years back when Posters such as anonymous Sea Shepherd came out with all sorts of emotional nonsense. She may have come to her senses, but equivalent ramblers have replaced her in far greater numbers.

Gosh, Norman. “years back?”. Might be time to get a life beyond trolling, don’t ya think?

Anyone who reads the Oz for information, rather confirmation of their pathological bias, deserves Boris. At least the Terror had xwords.