Sharri Markson is no longer the Australian's media editor -- here are her greatest hits. And other media tidbits of the day. 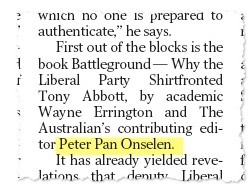 Sharri’s greatest hits. Long-time Crikey favourite Sharri Markson has after nearly two years moved on from editing The Australian‘s media section, with Saturday’s Weekend Oz revealing she’d been moved to a senior journalist position at the paper. Frequent side-kick Darren “he took my iPad” Davidson is taking over as media editor, and in that role was today co-authoring the Media Diary column with Oz newcomer Jake Mitchell.

In her time as editor, Markson:

And we really could go on. If you have a favourite Sharri Markson moment, please do share in the comments. We doubt her successor in the role will be anywhere near as interesting. She will be missed. — Myriam Robin

Even Abbott can’t help Bolt beat Insiders. There’s nothing so old as yesterday’s men — and so it was with The Bolt Report yesterday on the Ten Network with yet another weak suck job of an interview with Tony Abbott, now in full fade as a former prime minister (but don’t tell Mr Bolt). Abbott was his usual macho self on the Paris attacks and the issue of Islamic State and terror. It was all so yesterday. Viewers didn’t want yesterday’s message, they wanted something more nuanced, which they found on Insiders.

The Bolt Report was easily beaten by Insiders, which scored an interview with Prime Minister Malcolm Turnbull (which is more than you can say Abbott did when he was in office, preferring the soft approach from an adoring Andrew Bolt). Insiders had 408,000 national viewers (and 292,000 metro) on the main channel and 210,000 on News 24 (147,000 in the metros) against 226,000 for The Bolt Report across the country (151,000 in the metros). Bolt’s repeat in the afternoon managed 142,000 viewers, so 366,000 for both programs across the country. Insiders’ evening repeat was watched by 108,000 viewers, so the total figure for the program yesterday was 726,000, which meant game set and match to Barrie Cassidy. And Insiders’ 618,000 (without the evening repeat) easily saw off Seven’s Weekend Sunrise nationally and in the metros, which had 605,000 viewers and 515,000 for Weekend Today on Nine.

How a tragedy was covered … Saturday was a big day for the ABC’s News 24, which had a metro prime time share of 4.5% (and it would have been much higher earlier in the day).But by yesterday viewer interest had faded and News 24’s prime time share in the metros was just 1.5%.

To cover the attack, Seven flew reporters from around the world into Paris, including Sam Armytage from Sunrise who hosted the Sunday night special. Nine flew in Today’s Karl Stefanovic and some reporters. The ABC eventually shifted reporters from London to Paris. All took vision from French TV and the BBC/ITV. On pay TV, Sky News dominated Saturday with a share of 2.9%, second behind the quaintly organised “Other Subscription Channels”, which includes CNN. It had share of 3.2%, so clearly the appetite for news about Paris was strong on Saturday. — Glenn Dyer

… and how not to react. Radio hack Steve Price was quick off the mark on Twitter on Saturday:

As thousands of Twitter users pointed out, Steve appeared to be watching the coverage on a Pye 12-inch cathode-a-matic, which only gets five channels — and was thus unaware that the ABC was covering it through, erm, ABC News 24.

Actually, Steve’s TV only gets four channels — he appears to have missed the fact that none of Ten’s free-to-air channels carried news coverage. If only he had some sort of presence on a Ten news show so he could alert them to this lapse …

In fact, News 24 was swapping back and forth between BBC, France 24 English stream, and local commentary, a pretty fluent effort. Nine and SBS were both switching between local anchoring and streaming.

But the winner for “worst Twitter response” might be disgraced reporter Judith Miller, responsible for much of the New York Times’ wildly inaccurate reporting on Iraq and WMDs:

Brace yourselves, Foxtel is coming. The government rushed through legislation in May to let companies like Foxtel to take internet service providers to court to get sites that let you illicitly download films and TV shows blocked from access. Foxtel had long been promising it would use this legislation as quickly as possible, and said that it would have a case ready to lodge in the court in October. Well, October came and went, and there has yet to be any case lodged by anyone using this new power.

We asked Foxtel’s head of corporate affairs, Bruce Meagher what was going on, and he said Foxtel was “definitely preparing to make use of the legislation.”

“The case is taking longer to prepare than anticipated, but we will begin proceedings as soon as we are able to.”

We wait with bated breath. It’s still unclear why the government had to rush the legislation, given no one has bothered to actually use it in the seven months since it passed. But then again, it does make us compliant with the Trans-Pacific Partnership. — Josh Taylor

A not guilty verdict not enough for most. So you reckon that having been charged with a serious crime, and then found not guilty, you would get your old job back? That’s the theory, but not in the parallel universe known as Murdoch World where all things rational are viewed through a prism of self-interest and favouritism. Rebekah Brooks and the Murdochs have finished the clean of journalists involved in charges by police on the now discredited Operation Elveden, which laid charges against a number of journalists for allegedly paying public officials, and those officials, for receiving the claimed payments. Some 23 Sun journalists were arrested and/or charged as a result of information given to police by News Corp’s Management and Standards Committee, overseen by the now senior News executive at the Dow Jones Co, Will Lewis. Only one was convicted and an appeal in that case is underway.

Media reports in London over the weekend say The Sun’s head of news Chris Pharo is leaving the paper in the wake of his arrest and trial under Operation Elveden, and despite being cleared by a London court earlier in the year.

The paper’s deputy editor Geoff Webster is also reported to be not returning to the paper following a long suspension after being charged, though being found not guilty of paying public officials. Only one Sun journalist was convicted, Anthony France, who is currently in the process of mounting an appeal. News refused to fund his appeal and he was forced to crowd source his costs.

The Press Gazette reported that the latest departures mean that nearly all the senior Sun executives suspended (and ultimately cleared) as a result of their arrests under Operation Elveden have not returned to the newsroom. “Other senior Sun executives to leave the paper after being charged under Operation Elveden and suspended from work include: former managing editor Graham Dudman, executive editor Fergus Shanahan and picture editor John Edwards,” the Gazette reported.

And it says there are two other senior departures from The Sun, which are not connected to the bribery claims.

But hang on. That means the only employee who left the paper under a cloud of suspicion to return is CEO, Rebekah Brooks. She was cleared of phone hacking related charges, and unlike almost everyone else, was then re-employed by the Murdochs. — Glenn Dyer

Front page of the day. French papers mourn a tragedy … 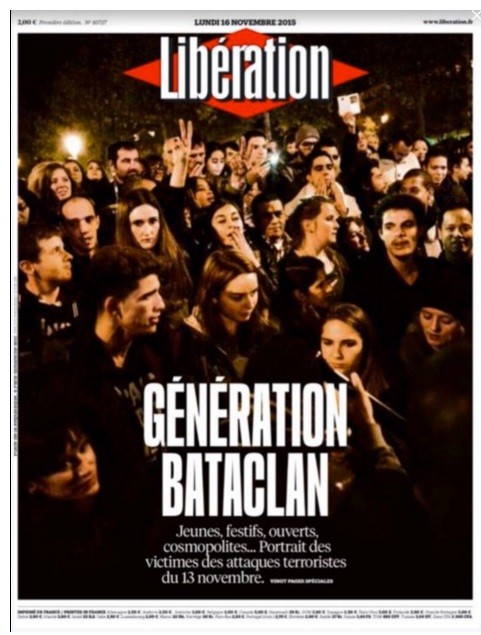 One amusing sidelight of no show twitters is I get to see your headings: peterpanonselen heh heh.

A non-amusing sidelight, John, is that although Crikey frequently champions those it supports who’ve been fortunate enough to be found not guilty because there weren’t sufficient grounds to establish the crime beyond reasonable doubt, since they don’t like this defendant, suddenly a decision of not guilty isn’t enough for them.

Amongst the watchers of Insiders are those of us who live outside Australia. Without the limits previously imposed by Australia Network we are now able to see Insiders via the internet at: http://www.abc.net.au/insiders and the program is available within hours of its first broadcast in Australia. I know at least six people who watched Insiders yesterday using that address in one smallish SE Asian city.

Fortunately for us we cannot see Bolt’s program.