Turnbull's Indonesia trip is an important one, but there are some fraught issues to avoid. 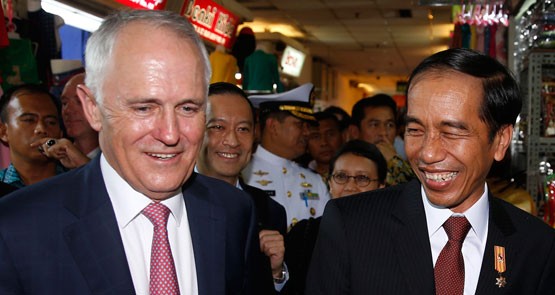 It was the Indonesian who spoke most plainly about the often tumultuous relationship between Indonesia and Australia: that because of the “proximity of our two countries” there was “potential for friction” between the two. And friction aplenty in recent decades there has been.

It is, importantly, the first trip by an Australian PM to the country since the fallout over the executions by Indonesia of two Australian drug traffickers. Most Australians do not agree with the death penalty — it is odious — but the pair went in eyes open. In Australia’s berating of Indonesia under Tony Abbott, the implicit message was “the big brother” belittling the “little brother”.

From the point of view of Australia, whose leaders in the recent past to a woman and man have declared the importance of the relationship with the vast and populous archipelago to our north, Turnbull’s trip is overdue. The new PM, who has a better implicit grasp of power relationships than his three predecessors, has a keen desire to move on.

Trade Minister Andrew Robb will follow Turnbull to Jakarta next month with a 300-person business delegation, continuing his trademark “bigger is better” approach to such things that most seasoned trade diplomats see as overstuffed, logistically difficult visits that limit the real point of such exercises: person-to-person contact between business folk from both countries rather than dinners in grand hotels where the participants talk among themselves.

With the executions of Andrew Chan and Myuran Sukumaran still reasonably fresh in people’s minds and the boat turn-back policy that has caused such problems in Indonesia still in place, Turnbull was keen to focus on economic ties.

In his meeting with Widodo he stressed that both leaders were businesspeople who had moved into politics, a rarity in both countries.

“We have common, very common interests, and common objectives, and it is about growth, it’s about jobs, it’s about stronger economies,” he said.

The problem for Australia is that its relationship with Indonesia is competitive, not complimentary. Indonesia’s major exports are minerals and metals and agricultural products — sound familiar? In fact, Indonesia has superseded Australia as the world’s biggest coal exporter.

As a result of this two-way trade between Indonesia and Australia was $11.8 billion in 2014, compared with India’s $15 billion, and Indonesia sits behind the smaller economies of Singapore, Thailand and Malaysia on the trade partners list.

What is under appreciated in Australia at so many levels is how this country is perceived in Indonesia and indeed across south-east Asia, where Indonesia is the largest economy. Indonesia watchers say this is particularly true of Widodo, who is struggling after barely a year in the job and far more focused on domestic issues such as the country’s stuttering economy, drought and the annual smoke haze, which has intensified to its worst in decades this year. Australia’s politicians might talk up Indonesia’s importance, but for our neighbour, Australia is well down the list after major investors like Japan and Singapore.

But right now, the country highest on the minds of Asian leaders is of course China for the two-fold reason of the huge licks of investment that it promises, balanced with the growing veiled threat of its action in the South China Sea, where it has built islands on the top of submerged rock and claimed them as sovereign territory. Indonesia is one of seven nations disputing various swathes of the South China Sea mainly with China but also with each other.

Under the previous regime of Susilo Bambang Yudhoyono, Indonesia by and large kept out of public spat with China. Yet under Widodo there has been a marked step up of Indonesia’s national interest underscored by his decision to blow up a number of Chinese fishing boats found poaching in Indonesian waters — part of a much broader regional problem whose main culprits are the Chinese and Thais. So there may be some commonality on the South China Sea issue, on which Turnbull has already spoken out assertively, against China.

The other nationalistic policies being pursued by Widodo are hitting Australia hard in one of our key economic links: the live cattle trade. Earlier this year Indonesia caused pain across the Australian sector by sharply cutting the quarterly quota of its Australian imports. The tension is simple: Australia wants to sell Indonesia more cattle (and sheep), and Widodo is prosecuting a policy of resource self-sufficiency, which means that the country wants our cattle not just to eat but to restock. Indonesia has myriad problems in getting other parts of its agriculture sector in terms of logistic and technology to the point of self-sufficiency, and this is an opportunity Australia can embrace in the spirit of a closer economic relationship and stronger links.

But perhaps Turnbull’s major point of difference to his predecessor was one of style. In his promise to “reset” relations with Jakarta. Abbott took Robb, Julie Bishop, the “usual suspects” business lobby and busloads of bag carriers. Turnbull took his wife, Lucy, and after his meeting with Widodo, slung his jacket over his shoulder and walked with his host through the local market. Here was a man very comfortable in his own skin (despite an admission he was feeling the Jakarta heat) and at home anywhere in the world. The optics, as they like to say, could not have been better.

What remains to be seen is if he can, or indeed thinks he has to, leverage this into something more concrete.

If Australia stopped fretting so much over Indonesia and stymieing itself with the weight of self-imposed expectations — and there were certainly signs yesterday that Turnbull is moving this way — then things might well just start to run a little more smoothly. Especially if Australia accepts, as Indonesia does, that there will always be tensions of some form or another with Indonesia — that’s what happens with neighbours, even the ones you really like. The trick is  to deal with them calmly and without rancour.

What’s next for Australia’s ‘most important’ relationship?

I always suspect the quality of information of journalists who haven’t bothered to inform themselves about how people’s names work in another country. Like western journalists who assume for no reason that Joko Widodo’s surname is Widodo. He’s Javanese. He doesn’t have a surname. His sole name is two words, Joko Widodo. That’s why Indonesians nickname him Jokowi. Calling him Widodo is just cutting his name in half sort of like calling Turnbull “Bull.” Well perhaps not quite like that because that might be an intentional comment.

Supamals being feted overseas and its all because he’s not Tony..it’s not often you get an international boost from a domestic coup..

I have no idea what SilverMal intended to do/say but his mere appearance as ‘notAbbott’ can’t be a bad idea.
The Indonesian’s realpolitik will adjust accordingly.

I don’t think that Australia can ever reach an honest understanding with Indonesia. They are awful in many respects and Irian Jaya is a festering sore that can never be resolved.

The difficulty for Crikey Land isn’t whether issues are mentioned, but rather their inability to understand the issues.