Selfie diplomacy. From all reports, Prime Minister Malcolm Turnbull’s first visit to Indonesia has been a success — a meeting on the veranda with President Joko Widodo, minimal mentions of the testy relationship over the last few years, and a visit to the Pasar Tanah Abang market. The Australian media has been glowing. But what about the Indonesian media? Were they charmed by Turnbull? According to the Indonesian papers, our Prime Minister did make a good first impression, although the issues of spying and boat people did appear in multiple reports of the visit. Some articles seemed to make the point that the relationship is better than under Tony Abbott’s leadership. In one piece, translated by a Bahasa-speaking tipster, the relationship between the two countries is described as “frictionless”, after it “reached its lowest point under the leadership of Tony Abbott”. The Jakarta Post also called the spying scandal the lowest point between the two countries but reported that Jokowi taking Turnbull to the market in a display of “blusukan”, an impromptu walk among the people, was a “display of affection”. In an unusual move, Turnbull and Jokowi took the same car to the market, and the Post reported:

“In an unexpected move immediately after they arrived, Turnbull took out his cell phone and asked Jokowi for a selfie photograph in front of the eastern entrance of Tanah Abang Market’s Sector A.”

While the selfie was unexpected, Turnbull and Jokowi look pretty comfortable in the photo uploaded to social media: 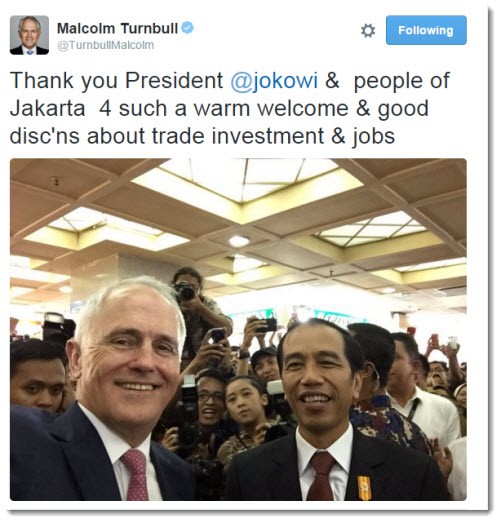 The cost of transparency. While the public service is increasingly openly averse to accountability, with senior officials attacking freedom of information laws as some sort of outrageous impediment to frank advice to ministers, there’s another front in the war on transparency that has recently been opened up — and by an unexpected party. Public service eminence grise Barbara Belcher — one of the most highly regarded public servants of her generation — recently reviewed the level of internal “red tape” in the public service, of which there is a staggering amount, even (indeed particularly) from departments that like to lecture the rest of the service, and the public, about the need for efficiency and deregulation. Belcher’s report can be found here, but one of the areas identified by public servants as needing (in their view) fixing was reporting requirements for Austender, the website where you can see what contracts have been awarded by government agencies to whom. It’s a critical accountability tool that allows citizens and the media to see which companies are benefiting from government largesse — and public servants want to dramatically curtail it by significantly lifting the threshold at which Austender entries are required to be submitted. Worse, Belcher agreed with them, and recommended:

“Finance reinvigorate its efforts to introduce a higher reporting threshold in the CPRs for mandatory reporting of non-corporate Commonwealth entity procurement contracts to reduce the compliance burden by decreasing publication of low value contracts.”

At a time when transparency has been devastated by a Coalition government that exploits any opportunity to operate in secrecy, any reduction in Austender reporting requirements, even of small-fry contracts, would be another bitter blow against transparency. And it’s disappointing it has come from a figure whose reputation for probity and the highest standards of accountability has hitherto been above reproach. Fortunately, departmental secretaries declined to adopt Belcher’s recommendation, instead settling for “reduc[ing] internal systems and processes for Austender notification” in their response. Watch this space.

Where in the world is Kevin Rudd? It ain’t easy to interview Kevin Rudd. Or at least, that’s what Kate McClymont says Sarah Ferguson told her, which she then relayed to the audience at Storyology yesterday.

The session was titled “When Sarah Met George”, and was going to be Ferguson and George Megalogenis in discussion about political interviewing. Both journalists have recently completed documentaries that aired on the ABC that, in part, involved extensive interviews with former prime ministers. But Ferguson was sick, so McClymont was dragged in at the last moment. She endeavored to pass on what gossip she anticipated Ferguson might be OK with sharing about the filming of The Killing Season, as it had been told to her.

Ferguson has already spoken of how Kevin Rudd insisted on being interviewed in New York. But this wasn’t as simple as bringing up a camera crew. Ferguson had three interviews with each of Gillard and Rudd, and for continuity, when one of Rudd’s interviews had to take place in New York, the ABC had to ship over the whole set, couches and all. Meanwhile, Gillard, while not insisting on a set remake in the US, did get a haircut over Christmas. So no images from her final interview were used — though sound from it was layered over other images.

Megalogenis was less forthcoming with the behind-the-scenes gossip, though he did remark that Rudd insisted on being interviewed at Harvard, where he was at the time. That gave Megalogenis an excuse to head up to America, where he got a few more shots and interviews.

So here’s a handy tip for ABC journos keen on finding a way to make Aunty pay for travel. Find out where Rudd’s going be and ask to interview him. He’ll insist you fly out to meet him and voila.

Killing Hitler, and brain cells. It definitely feels like the silly season has started, with political debate in the US turning to the question of whether or not Republican political candidates would go back in time and kill baby Adolf Hitler. Candidates Ben Carson and Jeb Bush have already weighed in on the ridiculous hypothetical, with Bush answering “hell yeah” in an interview with the Huffington Post, and Carson saying “I’m not in favor of aborting anybody”. The question originated with a poll in the New York Times Magazine last month, where readers were asked “If you could go back and kill Hitler as a baby, would you do it?” (42% would). The reporter who put the question to Carson changed the wording, asking if he would abort baby Hitler. It’s just under a year until the US presidential election.

Le vin, c’est la vie. How important is wine to a good dinner? It’s non-negotiable in France, according to a report from the Washington Post. Iranian President Hassan Rouhani is due to visit Europe starting this weekend, including a visit to France. French officials reportedly cancelled plans for a formal meal between Rouhani and French President Francois Hollande after the Iranians asked for a wine-free meal with halal meat — something the French couldn’t abide. The French then offered an alcohol-free breakfast, which was rejected by the Iranians. The Washington Post reports the leaders will have a face-to-face chat next Tuesday. No word if snacks will be served, though.

Rundle: high on Jesus in a failed Las Vegas dream

Rundle: tears, cheers and no actual policy at Carson love-in

if Adolph was around in the US now he’d be running for office as a tea partier no doubt..

Over-zealous application of freedom of information laws will impede frank advice to ministers. Advisers will always have to consider how their advice can be twisted, misconstrued and taken out of context by the government’s political opponents. We already apply a lengthy moratorium on cabinet papers, so why not impose a much shorter moratorium of, say two years, on the FOI release of advice given to ministers.