What a load of drivel the increasingly unimpressive Treasurer Scott Morrison talks about tax. This is Morrison last weekend:

“We don’t want to see the tax burden increased on Australians, we don’t think the way you grow your economy is by increasing the tax burden.”

So let’s look at the budget papers from May. Specifically, budget paper No. 1, p. 10-20, which has the level of tax receipts as a proportion of GDP. Here’s a screenshot. 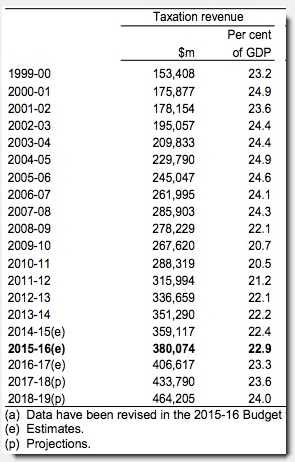 The Coalition’s entire fiscal strategy is based on significantly lifting the level of tax revenue as a proportion of GDP, from the ~22% it inherited from Wayne Swan and Chris Bowen to 24% of GDP — although that’s not as high as Peter Costello inflicted on Australians in the Howard years. And funnily enough, the budget papers are also based on a significant increase in economic growth while that tax increase happens. Not merely does the Coalition think you can grow your economy while increasing the tax burden, they’re depending on it.

And if Morrison really thinks, contrary to the government’s own budget papers, that this is a problem, there’s a straightforward solution. Bracket creep is easily dealt with, by indexing income tax thresholds. Every year, the thresholds would go up, eliminating bracket creep before it can eat away at workers’ wages. Simple.

Of course, it would prevent posturing politicians like Morrison from pretending to be advocates of lower tax when they’re in fact reliant on increasing the tax burden. But as taxpayers, we think that’s a small price to pay. What about you, Scott?

Morrison is an absolute liability for Turnbull…a strong treasurer is a must for any successful PM..he’s actually looking very shifty..he looks about as comfortable talking
about the economy as Abbott was..

Couldn’t be simpler – raise threshold as well as the top rate.

Crikey – As I have said before, in order to pay more tax (and be disadvantaged by bracket creep), workers need to have a PAY-RISE!
Since the evidence seems to be saying that wages are going backwards, where are all these workers who are paying more tax?
The only ‘workers’ (joke!!) who get pay rises are those in the top 2-3% of employees, and the SHOULD pay more tax. Usually their salary increases are in the tens of thousands to millions of dollars.
Don’t know about you, but I won’t be losing any sleep over their move into a ‘higher tax bracket’ – mainly because there isn’t one!!

Talk of bracket creep is just another distraction from the real issues.

Wage growth over the next 5-10 years will be minimal, if it happens at all.