It takes some pretty dedicated blinders to ignore the evidence that external factors were involved in the Dismissal. 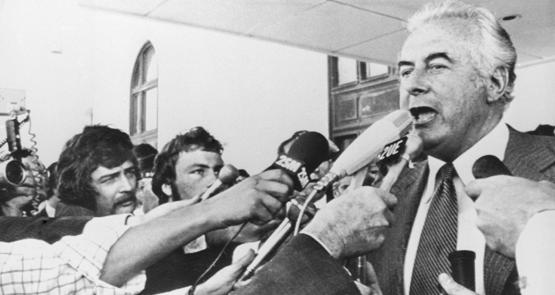 There’s a curious disjuncture at work in the world. In their everyday lives, people accept that collusions, conspiracies, plots exist — in families, workplaces, tennis clubs, you name it. Yet when any suggestion is made of such in politics, where the stakes are huge, people dismiss the thing they do as a matter of course as “conspiracy theory”. Indeed people will even accept conspiracies at work in relatively minor politics, while rejecting it for global stakes stuff.

That appears to have reached its height with the 40th anniversary of the Whitlam dismissal — a week in which a compliant press simultaneously turned their attention to Foreign Affairs Minister Julie Bishop’s possibly more active involvement in the Abbott dethroning, while repeating the lapdog-like the mantra that there was no external involvement in the Dismissal. It’s a line they’ve taken from the Paul Kelly/Troy Bramston book, The Dismissal, and repeated, ’70s mantra-like, without the slightest examination. What’s extraordinary about that is not that the evidence that the Dismissal was about much more than the Dismissal is not simply there, but is ample, voluminous, a matter of public record. In order to disregard it, you have to make a strenuous attempt to avoid it. And that is what Kelly and Bramston have done. A reminder of some things we’ve always known — and they would like us to forget — is in order.

By mid-1975, the Whitlam government appeared to be in one big crisis, the loans affair. It was actually about to be enveloped in a triple crisis, with a collapse in national security/government relations, and the denial of supply. All three were interconnected. Whitlam had agreed to a policy from the left, to raise loans from petro-states and beyond, to buy back Australia’s whole resource sector for $4 billion. Deputy prime minister Jim Cairns had already come to grief due to this scheme; carriage of it passed entirely to minister for resources and energy Rex Connor, who hired a global carpetbagger, Tirath Khemlani, to try and find the money. Connor ran Khemlani long after Whitlam had withdrawn the commission to do so. Around September, the Liberal-National Country Party opposition acquired transcripts of telexes between Khemlani and Connor. Khemlani then turned and became a Liberal-NCP informant. On the basis of this scandal, the Fraser-led opposition blocked supply, and demanded a full election.

Liberal-NCP access to the telexes increased suspicions already afoot in Labor — that the opposition was being supplied with information by US security agencies operating the Pine Gap and other surveillance bases, which scooped up all communications (including telexes). The suspicion occurred at the same time as Whitlam had finally lost patience with the free-agency operations of ASIO and ASIS. In the wake of their failure to avert right-wing dissident Croatian violence in Australia, the government had formed the Hope Royal Commission into the intelligence agencies. In the wake of it, he had removed ASIO head Richard Barbour, replacing him with an interim head, Frank Mahony, who was outside the spooks’ community. In October it had become clear that ASIS — our overseas spy agency — had been involved in backing an anti-Marxist political group in newly independent East Timor, contrary to instructions to stay out of other countries’ politics. The head of ASIS was sacked.

From the perspective of the US agencies it looked like Act III of Whitlam’s dismantling of the Australia-US security nexus had begun when, on November 2, in Parliament, he named Richard Stallings, a US “diplomat” and the first director of Pine Gap, as a CIA agent. Stallings was a friend of NCP leader Doug Anthony, rented a house from him, and Whitlam posed the question as to whether the CIA was funnelling money to the opposition. Stallings’ name had been obtained by comparing the Foreign Affairs Department and Defence Department lists of CIA agents, and finding that Stallings only appeared on the latter — the department in which intelligence agencies were based, and headed by Arthur Tange, a close friend of governor-general John Kerr’s. Anthony challenged Whitlam to produce evidence of Stallings’ CIA membership, not knowing Whitlam had Tange’s list. Whitlam said he would in Parliament, the next week, on November 11.

The tying of the loans affair to Pine Gap, and Pine Gap to the CIA was disastrous for the latter. The base was due for renewal on December 9. Whitlam, the one-time US enthusiast, had seemed likely to do so a year earlier. That could no longer be assumed. It was at this point that his attack on ASIO paid off, when, on November 10, the interim head Mahony passed on a cable sent by Ted Shackley, the CIA’s east Asia head, to ASIO’s DC liaison. The cable was “agency-to-agency” — never meant to be seen by Whitlam — and said that the CIA wanted ASIO to continue to lie to the government about Pine Gap (about its mass intelligence-gathering role) and that the Whitlam government represented a crisis for Western security.

As Whitlam himself noted in parliament in 1977 of the cable:

It was amidst all of this that John Kerr had to think and act. The security issue , CIA funds, loans, etc, were the dominant matters of the week. Few thought the constitutional issue uppermost. You can only sideline these matters — as Kelly and Bramston do — by utterly obscuring Kerr’s intelligence background and political trajectory.

Kerr had been entwined with the shadow world for decades. A left-wing Sydney labour lawyer, he had been inducted into the mysterious Directorate — a unit of poets, anthropologists, etc, ostensibly assembled to develop alternative war strategies. Kerr’s first job in the Directorate was to draft a plan for extra-constitutional regulations that could be used for regions of the country under Australian military control, but cut off from government authority, following a Japanese invasion. In 1942, the Directorate was moved into the command of the wider Directorate of Military Intelligence, giving the lie to Kerr’s claim that he was never involved in that world (and which Kelly/Bramston accepted whole). Kerr then became part of a sub-unit BBCAU (British Borneo Command Authority), whose purpose was to have Borneo transferred to Australian control after World War II, with the US and Australia doing an “end-run” around British resistance to the idea. In that capacity, Kerr travelled to Washington and met with political and military figures on the matter, including with the OSS, the CIA predecessor (also unmentioned by Kelly/Bramston).

After being an adviser to Doc Evatt during the establishment of the UN in San Francisco, Kerr returned to legal practice, becoming a lawyer for the anti-communist “Industrial Groups” during a bitter dispute in the Ironworkers Union. Kerr represented Laurie Short, someone he has known in the late 1930s, when both had flirted with Trotskyism. Short was now an anti-communist, and accused the communists of stealing the result in the Ironworkers election, through ballot-stuffing. The two-year legal battle prompted the entry of US intelligence into the Australian labour movement, sponsoring a whole series of scholarships and grants for members of the industrial groups to travel to the US and then organise within unions.

It provided a segue by which Kerr abandoned his left affiliations, and joined the Australian Congress for Cultural Freedom, our branch of the CIA front the CCF. The CIA’s creation/adoption of the CCF was made public in the 1960s; as Cassandra Pybus’ biography of James McAuley (an ACCF pioneer, and a fellow alumni of the Directorate) makes clear, many of its principals pretty much knew the source of the funds long before the revelation. Kerr was part of the inner group — he stood for the the ACCF presidency and was defeated. He was also involved in the political front group, the Asia Foundation.

After that, unwilling to seek Labor preselection (he found the party too left-wing, the DLP nuts, and had no base within the Liberals), Kerr’s career went on the slide. Trapped as a judge in the Industrial Courts during the 1960s  he was rescued by NSW Liberal grandee John Atwill, who persuaded NSW premier Robert Askin to make Kerr chief justice of NSW. Bob Hawke had seen this new Kerr, and considered him a bastard who would sell them out. Whitlam maintained an image of him from the ’50s, when both were part of a Sydney social-democratic elite, liberal and constitutional in their attitudes to power.

None of this, none of it, appears in the Kelly/Bramston book — save for Kerr’s membership of the ACCF, whose CIA connections are not mentioned. Yet all of this is simply a matter of public record. As we now know, Kerr was conspiring with Fraser, Garfield Barwick and Anthony Mason on a case for dismissal, for weeks, not months — all through the loans and security crises. As we know from Whitlam biographer Jenny Hocking, Kerr was embarrassed to have signed off on the bill allowing for raising the loans, which made it impossible to present them as maverick activity by Connor. And as we know from former senator Reg Withers’ 1978 interviews, on the morning of November 11, Withers told Fraser that three left-Liberal senators were liable to cross the floor and grant supply by the end of the week (Whitlam needed one). November 11 was getting to be the last point at which an election could be held before Christmas — in time for it to be possible to renew the Pine Gap agreement.

The idea that Kerr was not considering any of this in his deliberations is foolish, ridiculous. The crucial questions come down to four alternatives:

It is 4) that is always presented as the necessary form of external involvement, which is absurd, and deliberately so.

What’s more likely is a scenario between 2) and 3). Kerr, a lifelong conspirator, conspiring with Fraser, et al, conspired also with Tange and others, and that security issues and pro-/anti-US foreign policy became a crucial factor in his decision to sack an elected PM and then prorogue parliament when his own choice was sacked by parliament. The strongest evidence for shifting it from 2) to 3) comes from a report by Brian Toohey in The Australian Financial Review, April 1977, that  government defence scientist John Farrands told him that he had briefed Kerr on Tange’s behalf, and communicated the fact that the US-Australia relationship lived or died on the demise of the Whitlam government. Farrands disputed Toohey’s version of that conversation.

However, the crucial point is that this version above is the minimal version. It relies entirely on facts on the public record, and points to an obvious consideration of the US alliance — and hence a sacking of Whitlam for his foreign policy — to make the case. The Kelly/Bramston version seeks to separate one part of the story from the other, and make the US alliance/loans aspect marginal. It does so only by whitewashing Kerr’s history.

And the more expansive version, taking in reasonable background testimony is more damning still — and a clue to current events. But that will have to wait till next week.

17 thoughts on “Rundle: all facts point to US involvement in the Dismissal”