Media briefs: mags light … too good to be true? … we like royal butts and we cannot lie …

There's a lot of fuss about the royal patootie. Plus other media tidbits of the day.

Gossip mags circle the drain. The deepest black hole of the latest print circulation report for the September quarter was weekly magazines, and Fusion Strategy’s Steve Allen was very gloomy, writing to clients overnight that the performance in the quarter “does not bode well for the future”. He writes: “The most concerning [point was] the larger circulation titles pretty much losing the most [in sales]”. That was borne out by many of the 10 weekly titles experiencing double -digit drops in sales — capped the 18.1% slide by Bauer’s Famous, while Bauer’s Woman’s Day suffered the largest fall in actual copies of 32,000 a week.

Allen said in his note the September quarter was “not a good audit” though one magazine, Yours, almost held its circulation, dropping only 1.9% of its sales to 60,072 copies.

Suneditor denies News Corp killed bribery story. Private Eye had a ripper of a yarn this week about News Corp kiboshing a story about lax security at Egypt’s Sharm El Sheikh airport because the company feared it would be accused of involvement in bribery. But was the story too good to be true?

Here’s the gist of what Private Eye wrote. Sun reporter Nick Parker visited Sharm El Sheikh five months ago and saw travellers could avoid security by paying a bribe. According to Private Eye, Parker pitched a story about this to his editors: he suggested slipping a guard a few quid and seeing if he could get through himself. But when his editors phoned New York HQ for permission, New York firmly killed the story, allegedly saying News Corp couldn’t be seen to be paying bribes anywhere right now.

But Stig Abell, the managing editor of the Sun, issued a number of forceful tweets saying he’d never been pitched the story at all, and had never asked for approval. “But nice to be blamed for a terrorist atrocity,” he wrote. — Myriam Robin

Front page of the day. What is it with Australians and touching the royals? 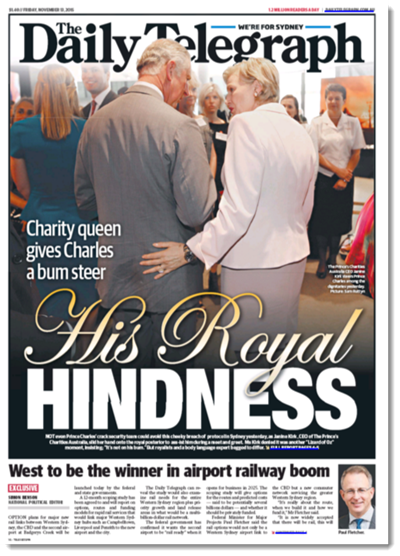