Inside the 21st Century Fox AGM, and the protest votes still to come. 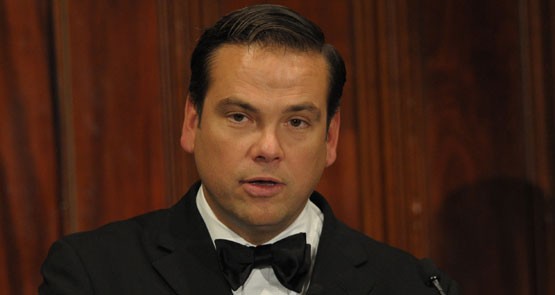 After elevating Lachlan Murdoch to executive co-chairman of News Corp and 21st Century Fox in July, it was puzzling when his 84-year-old father, Rupert Murdoch, dominated proceedings at the 22-minute News Corp AGM held in New York last month.

However, Lachlan was finally given an opportunity to speak at the 23-minute 21st Century Fox AGM held at Fox Studios in Los Angeles overnight.

After the voice-over man told the tiny number of independent shareholders gathered at the Zanuck Theatre that they were each limited to two questions over one minute in order to ensure an “orderly meeting”, Rupert Murdoch gave a brief three-minute address before handing control of the meeting to his eldest son.

Lachlan then read a seven-minute speech before introducing all of the directors, which surprisingly included BHP Billiton chairman Jac Nasser, who was sitting in the front row when he really should have been down in Brazil helping the Big Australian deal with its biggest human and environmental disaster.

Questions were delayed until all of the formal business had been dealt with and Lachlan informed shareholders that the requisite majorities were achieved for all the directors, along with the remuneration report and the re-appointment of Ernst & Young as auditor.

Unlike News Corp, where almost 50% of voting shares voted in favour of a shareholder resolution calling for an end to the Murdoch family’s dual-class voting gerrymander, there were no shareholders’ resolutions this year.

However, the decision by the Murdochs to delay lodging the final voting results with the SEC suggests there might have been some protests. Watch this link for the data through the weekend, and I’m tipping a big remuneration given that cumulative Murdoch family pay packets from public companies has now topped $1 billion, measured in 2015 dollars.

Two Fox shareholders asked questions inside the Fox Studio lot and the first produced a stammering response from Lachlan about the company’s US content distribution negotiating power in light of the emergence of over-the-top video-on-demand providers.

Lachlan’s conduct as Ten chair at the 2012 and 2013 AGMs were two of the least impressive performances I’ve seen at more than 400 public company AGMs. And the ums and ahs were on full display again in Los Angeles last night.

His younger brother James Murdoch is a much more assured operator, which is quite obvious if you read this sit-down interview the boys did recently with Hollywood Reporter.

Lachlan was missing from the REA Group AGM in Melbourne yesterday and when asked why he wasn’t on the board, News Corp Australia’s recently installed CEO Peter Tonagh said he didn’t have the time given he is executive co-chairman of two major media companies.

There were no protests at REA yesterday as News Corp voted its 61% stake in favour of all resolutions, even though it arguably should not be voting on remuneration matters given that its nominee as chairman, Hamish McLennan, is pocketing $310,000 a year and Tonagh collected $35,000 from his time as acting REA boss.

However, there were very big protest votes at the recent News Corp AGM as you can see from this list ranking the 10 most notable protest votes so far during the main 2015 AGM season.

Bradken: two directors resigned to avoid formal defeat but then there was still a 42% protest vote against remuneration report, which was somehow passed on a show of hands despite the strike.

News Corp: big protests across the board as advisory vote opposing gerrymander almost prevailed and all but two directors would have lost but for Murdoch family votes (see Crikey wrap).

UGL: Almost 50% against the remuneration report and 19% against CEO’s incentives.

McMahon Holdings: CIMIC lead a 40% protest vote against the remuneration report and one of the directors.

Fortescue Metals: 19% against remuneration report with founder Andrew Forrest unable to vote his 30% stake. Approved “unanimously” by show of hands when should have gone to a poll.

Crown Resorts: 19% against remuneration report with no Packer vote and 13.7% against non-independent director Michael Johnston.

There will be more protests to come as many of the most controversial requests are left until the last two weeks of the AGM season.

For instance, don’t be surprised if this ridiculous 10 million performance rights grant proposed for Saracen Minerals CEO Raleigh Finlayson is knocked over next Wednesday in Perth.

The Cabcharge AGM next Wednesday in Sydney will also be interesting. After an unprecedented seven straight remuneration protest votes above the 25% strike trigger, the Australian Shareholders’ Association is recommending a vote in favour of the Cabcharge remuneration report for the first time.

Did you get a profile view of Lachlan? I’m curious as to whether Rupert had his arm up his …., puppet style.

What fun it will be to witness Lachlan & James let loose on the empire once Rupert is gone.

Zut – somehow I doubt that the sum ability of the pair would equal Rupert’s grasp during his dying gasp.