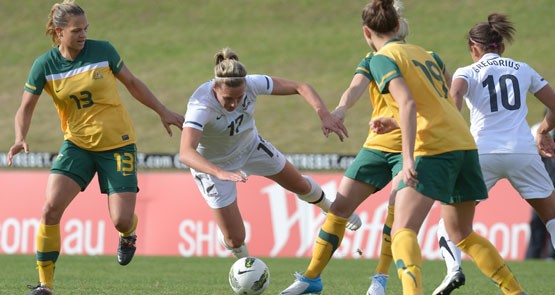 Football Federation Australia and the Professional Footballers Association finally came to an agreement with the Matildas last Thursday, ending a months-long pay dispute during which the women’s soccer team boycotted their American tour. But is it really a victory for women in sport?

PFA chief executive Adam Vivian said the agreement would “advance football in Australia with increased professionalism while securing the careers of Australia’s elite footballers” and would also bring about “significant improvements in elite women’s pay and conditions”.

Australia’s female cricket players, the Southern Stars, also received a pay rise earlier this year, with the Women’s Payment Fund up 36% compared to last year. Cricket Australia chief executive James Sutherland labelled the pay increases a step in the right direction and “recognition for the devotion of the national team’s time and effort”.

“We are still working towards the day when Australia’s female cricketers will be able to earn a full-time professional living from cricket,” Sutherland said.

But what do the changes mean and how do they now compare to their male counterparts? And why is there such a disparity between male and female pay in Australian sport?

How much were the Matildas paid before the recent pay rise? And how much are their male counterparts paid?

Before the increase, female soccer players were paid $500 per standard international game, compared to the Socceroos’ 2013-14 match fees of $6500. This meant that if the Matildas had made it to the World Cup grand final in Canada earlier this year (they lost 1-0 to Japan in the quarter finals) they would have earned a grand total of $5600 each for their efforts. In comparison, the Socceroos could have earned $69,000 each during their World Cup campaign last year had they made it the entire way through. They Socceroos have not progressed past the top 16 of the World Cup.

How do the increases for the Matildas and Southern Stars look now?

According to Football Australia, in addition to their contracts with the W-League, tier-one female players will now receive an annual salary increase, rising to $41,000 this season and to $55,000 by 2018, while those on tier two receive $30,000 this season, which will be increased to $40,000 by 2018. Match fees for all players and daily allowances (for non-contracted players) during Matildas camps and matches will also be included in the agreement. Top players were receiving around $21,000 per annum before the pay rise.

However, in three years this will only put Australia’s national female players on par with the minimum wage afforded to A-League players, whose wages also increased from $51,000 to $55,000. The A-League’s salary cap was also increased from $2.55 million per club to $2.6 million, while the W-League (not represented by PFA and therefore were not involved in the agreements) has a salary cap of $150,000 per club.

Investments from Cricket Australia increased the Women’s Payment Fund to $2.26 million — compared to the payment pool for the 19 male CA-contracted players, which stands at $14 million. The Australian reported that top-player retainers for the Southern Stars increased from $15,000 to $52,000 while minimum retainers rose from $5000 to $25,000. Coupled with tour payment increases, Australia’s top female cricketers, who are currently ranked first in the world and hold the Ashes, can earn up to $85,000 per year.

The Daily Telegraph reported that the average salary of a male international player next year will be $1 million, while many male state cricketers, who may never debut internationally, can earn an average of $250,000.

Why is there such a gender gap?

Although more than half of Australians polled told Essential in July that “women’s sport is just as exciting as men’s”, female athletes certainly don’t get the same amount of attention — with the Socceroos garnering five times the number of mentions in the Australian media than the Matildas for their far shorter World Cup run.

Spokesperson for PFA Beau Busch told Crikey the Matildas’ and the Socceroos’ pay “is vastly different”, but that the agreement with the FFA and the increases were a “starting point” that might create a platform for future negotiations on female soccer players’ pay. “[Pay] equality still needs to be addressed, and we’re looking to it over the next four years. There is disparity between male and female soccer players’ pay, but we’re working on it. We hope that the Matildas brand will grow, become more successful and can continually move forward.”

SMH writer Daisy Dumas has noted that while sports such as aerial skiing have equal pay for both men and women, the amount of effort it has taken to get the Matildas the minimum wage, “despite taking the same risks and doing the same training as their male colleagues”, shows just how far mainstream sport still has to come in bridging the gender pay gap.

The enemy of your enemy is not your friend

“women’s sport is just as exciting as men’s”…If that was the case then women’s sport would dominate TV and they would be making the $s. It just isn’t so in the vast majority of cases. Even in tennis where there is equal prize money across genders for big tournaments the interest is still mainly focussed on the men. The reason is simple. No woman player would even get close to beating a male professional with any sort of ranking. Undisputed nbr1 female Serena Williams can’t beat her male hitting partner who doesn’t even play on the circuit.

One suspects the only sport which TV execs would prefer to televise the female version would be mudwrestling.

If women want to get the big bucks then engage in open competition with men. Some sports which require skill and not athletic speed and strength, women should be able to go open…..darts, shooting, tiddly winks, poker….do it girls.

Only the ABC ladies want to feature women’s sport to fit in with their feminist irrelevance to the broader public, and to cater for the blokes who like watching lithe sweaty net ballers.

The answer to this and many more questions is ‘The Market’.

The Market has determined their value. It’s cruel, unfair and unjust. But that’s the way it works.

Women, like all differently abled people in the world, have an important role in society, but that role is not usually at the pointy end of sport.

If they WERE intended for the top level of sport, we wouldn’t have Mens Tennis and Womens Tennis. We’d just have ‘Tennis’.