Safari suit and dresscodes. Grandfather of the house Philip Ruddock had the Twitterati in a tizz yesterday when he tweeted yesterday morning that he would be making an “importance announcement” later in the day via the social media platform, which the 72-year-old has taken to like a duck in water this year. After a suspense-filled morning, Ruddock announced that on the final sitting day of Parliament for the year, he would wear a safari suit to Parliament to raise money for motor neurone research. 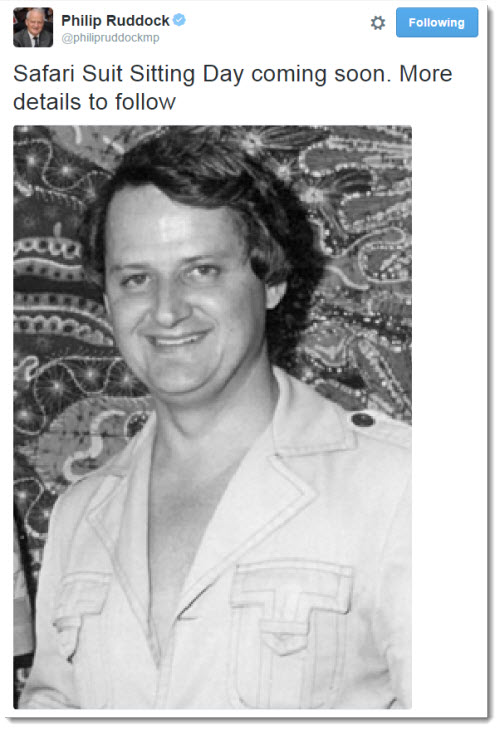 So far $146.50 has been pledged to the fundraising page, just over 10% of the way to the $1000 goal. We wondered if wearing a safari suit would contravene the dress code of the House of Representatives, but according to chapter five of the House of Representatives Practice, it was ruled in 1977 that “it was acceptable for Members to wear tailored ‘safari’ suits without a tie”. Ruddock was elected in 1973 — maybe the previous ruling was made for him?

Danby loves gay marriage, suddenly. A constituent in Michael Danby’s electorate of Melbourne Ports was bemused to receive this letter from his local MP this week, in which Danby promotes his views on marriage equality, and derides Prime Minister Malcolm Turnbull for sticking with Tony Abbott’s policy of a plebiscite to decide the issue. “The proposed plebiscite is another delay of a decision that should be made by Parliament,” he writes. “Many will question why this issue has been singled out to be outsourced, absolving MPs of their core role to represent their constituents in Parliament on difficult issues.” 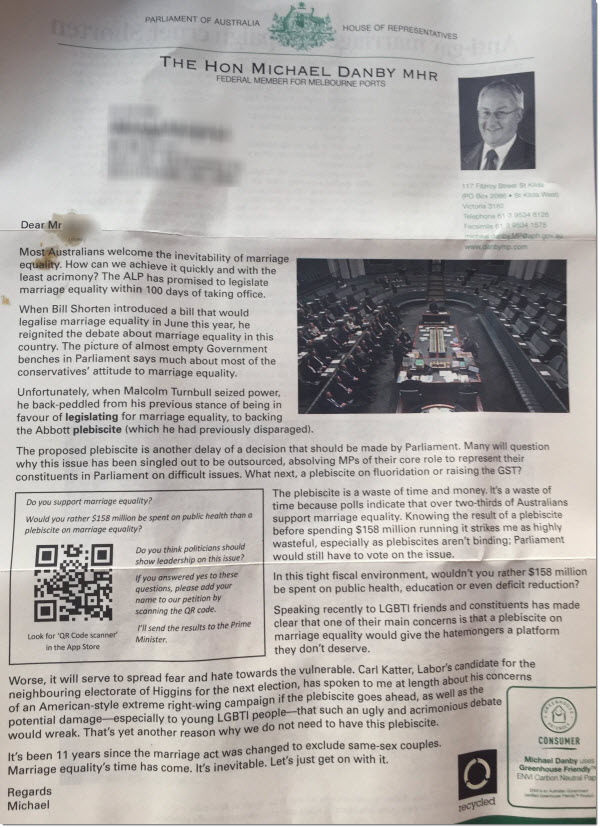 Our tipster writes “Apologies for the sauce stains; had to dig it out of the bin.” Danby’s focus on MPs fulfilling their responsibilities to represent constituents struck a chord with the tipster, as Danby has not always shown the same commitment. In 2012 Danby abstained from a vote on marriage equality, without explaining why for more than six months. He eventually told Melbourne LGBTI radio station Joy FM that he didn’t vote because he didn’t think the bill would pass. In July 2012, Danby told the Star Observer the decision was about saving the government:

“It’s the worst political crisis and ugliest Parliament I’ve ever been in, and there are lots of issues that people are involved in … the leadership in particular, and they took priority over some other issues. I can’t apologise for it because that’s just what happened.

“It’s not that I didn’t have time, I prioritised what I thought was important. Survival of the government was — it was obvious at any minute that we could go under, and I was concentrating on stability inside the government and on other issues, which didn’t give this the priority that people in the LGBTI community wanted.”

Shades of Gillard. Former prime minister Julia Gillard is back in the public eye, receiving a rock star reception at the second of two appearances at the University of Melbourne yesterday. After launching former Victorian premier John Brumby’s book earlier in the day, Gillard backed it up by presenting the Foenander Lecture in the evening. The lecture was quite the logistical challenge, with audience members corralled into the theatre more than half an hour before the lecture’s advertised start time, at which point Gillard walked down the stairs to rapturous applause. The lecture, titled “The Global Education Agenda Abroad and Gender Equity At Home”, only paid glancing attention to her political career, focusing on her work with the Brookings Institute in Washington and the long list of educational philanthropic bodies. There was almost zero mention of the current government, or Tony Abbott, although the word “agile” did make the cut. Gillard did reveal one regret about her final speech after being deposed as leader, when she said of the role her gender played in her success: “It doesn’t explain everything, it doesn’t explain nothing, it explains some things. And it is for the nation to think in a sophisticated way about those shades of grey.”

Gillard added: “Now given everything that happened since, I’ve had a lot of time to regret using the terminology ‘shades of grey’.”

Australian Museum — staff face the axe. Staff at the Australian Museum in Sydney were shown the door this week, with 12 staff told they were no longer needed. The round of targeted redundancies follows 38 staff who had taken voluntary redundancies. A source from the museum tells us that morale is at “rock bottom” and that the staff left behind are not happy. It had previously been reported that up to 100 staff at the museum faced losing their jobs before Christmas, but in a statement the museum said that the workforce of 380 had been reduced by 13% in full-time and part-time roles. The exact number of jobs lost was not confirmed.

The statement said that the job losses were necessary for financial reasons:

“The Australian Museum (AM) is undergoing a reorganisation to meet its financial obligations and to ensure it has the right capabilities among the workforce to fulfil its future needs and realise its vision. To meet these objectives, the AM has undertaken workforce planning identifying the roles, capabilities and organisational structure required for its future and to ensure its long-term financial sustainability.”

The Australian Museum statement described this week’s redundancies as further voluntary redundancies, although staff did not see them this way:

“As part of the overall reorganisation of the workforce, the planning process identified seven roles no longer required as well as functions that could be provided more effectively in other ways.  The affected employees were notified on Tuesday 10 November and may choose to accept an offer of voluntary redundancy or pursue redeployment during a three month period as per NSW Government policy.”

The redundancies have “caused a lot of distress,” one staff member said, pointing to a complete clean-out of the security staff, whose jobs have been taken over by external contractors. The loss of the security staff was described as “major” by a source, saying that the new contractors look like “anti-terrorist” officers. The museum’s statement said the change to contractors was “in line with other institutions”:

UPDATE: A previous version of this story said that up to 14 staff were made redundant yesterday and that it was not clear if the redundancies were finished. The Australian Museum has now clarified these points.

What day is it again? Crikey sister site Women’s Agenda must have missed out on the morning coffee yesterday, sending out this apology for declaring yesterday Anzac Day instead of Remembrance Day: 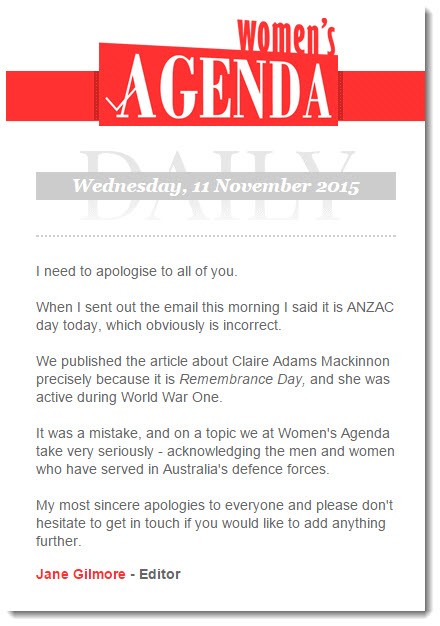 Gillard wasn’t alluding to that execrable novel was she?