NSW Christian Democrat Fred Nile is under fire for backflipping on his opposition to expanding retail trading hours on public holidays. 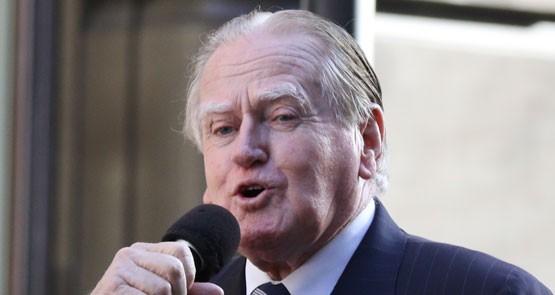 Australia’s major grocery retailers and department stores are celebrating the decision by the New South Wales Parliament to permit trading in NSW on Boxing Day.

As recently as June this year 81-year-old Nile was quoted in Sydney’s Daily Telegraph as opposing retail trading on Boxing Day because of his “pro-Christian, pro-family” stance. This has led to intense Macquarie Street speculation about why Nile has changed his position.

He said a mere four and a half days out of 365 days a year were now protected, and he warned that trading would not only be allowed on Boxing Day but might also be extended to Christmas Day, Good Friday, Easter Sunday and before 1pm on Anzac Day. “We should not be surprised because the current Prime Minister [Malcolm Turnbull] has recently spoken about how there should be no distinction between night and day or one day and the next, whether it is a weekday or a weekend,” Searle said.

He said the legislation did not increase the maximum penalty of $10,000 on big retailers who breached the law, adding: “To date, the one and only prosecution for illegal trading under the act has resulted in a fine of $500 for JB Hi-Fi. JB Hi-Fi would have made that amount within the first 10 minutes of its doors swinging open, so it is clear the penalties that exist as a deterrent are not a deterrent.”

He said the bill’s description of retail workers who “freely elect to work” on Boxing Day was a sick joke because it was widely known that workers were subjected to coercion and compulsion.

“At its very core and essence, [the bill is] anti-family and anti-community,” he said.

Greens MP David Shoebridge said the idea that casual, low-paid retail workers could stand up to the likes of Woolworths, Coles, large department stores and chain stores was “not realistic”.

At a public meeting at Sydney’s Wesley Mission on November 13, 2012, Nile said, “I declare my opposition to Boxing Day trading” and after a meeting with retail and church leaders on December 2, 2014 he issued a press release supporting “family time over extended shopping time”.

Donnelly said that during this year’s state election, Nile campaigned on opposition to Boxing Day trading. “He included the defence of public holidays as a dot point on his party’s how-to-vote cards,” Donnelly said.

Under the heading, “The one you can trust”, the card published a subheading “Better conditions”, which said the CDP would “protect workers’ rights to public holidays including Christmas and Easter”.

He tabled letters written to Nile from 16 Christian bishops and priests imploring the CDP to oppose the Coalition legislation.

“It has been suggested to me that following the meeting of those religious leaders there was a degree of movement towards some sympathy with the government’s proposition,” Donnelly said.

An unrepentant Nile rejected criticism from Labor, the Greens and the Shooters and Fishers Party, saying: “Our party is committed to protecting the workers, and that is why we have spent a great deal of time in studying this legislation and preparing amendments which we believe will continue to protect holy days, such as Easter and Christmas Day.”

The opposition parties voted for Nile’s amendments — and they were passed — but they still voted against the amended bill, which was carried just after midnight on Tuesday by 20 votes to 19.

Donnelly shouted across the chamber: “You are a fraud, Fred, an utter fraud.”

In the closing minutes of the debate, Shooters and Fishers MLC Bob Brown warned Nile about the delivery of any backroom deal he might have done with the Coalition.

“I just pray to God that the government does not skunk you, Fred,” Brown said.

But another MP told Crikey that any deal between Nile and the Coalition would quickly become apparent. “I’m expecting Nile to present a private member’s bill to the house demanding a free copy of the Bible in every home in NSW and Coalition MPs supporting it,” he chortled.

Good old Fred, taking christ out of christmas! What next? Will he now support euthanasia?

Living in the real world I know that a fair percentage of people would relish having to work on Christmas Day – the perfect excuse to avoid the family.

Not everybody likes Christmas, some actually dread it.

Watch for the CDP Mardi Graa float, featuring Fred in black fishnets and a tutu

I work in a 365/24/7 workplace and I’m working Christmas Day again this year but we all usually get a choice to work or not on the public holidays.

The difference is that because we’re a health facility we MUST be open on public holidays such as Christmas and Boxing Day. There’s no way Boxing Day should be essential for retail to open.

Zeke, for several years I worked for an organisation which also operated every day of the year. The single (unmarried) employees were always allocated Christmas Day shifts as, apparently & remarkably, we were not acknowledged as having families – no parents, no siblings, no grandparents, cousins etc, none! However, for the Christmas shift we were compensated with a penalty rate.

Unbelievable as it sounds, the employees who had celebrated Christmas Day with their families were then allocated an extra paid day off (in addition to the 25th Dec) because they had missed out on the penalty rate. Go figure…