Big Harto still giving out gems. Plus other media tidbits of the day.

Like white ants. Former News Corp chief John Hartigan, or Big Harto, was always good for a quote, and Crikey‘s media reports have been poorer for his departure from the country’s largest private news organisation. Which is why this gem from the Prime Media AGM on Tuesday (Harto is chairman) is so appreciated. We’re glad Fairfax’s CBD column picked it up:

“Who would have thought that Peter Tonagh would be running the company,” he said, referring to News Corp Australia’s new CEO.

“It shows the level of disruption when you’ve got someone of his background coming in to the CEO [role]. It wasn’t all that many decades ago that I recall Rupert Murdoch just never countenancing having a management consultant anywhere near the building because he had a view, that wasn’t dissimilar to mine, in that once you let them in they’re a bit like white ants, you can’t get them out.”

The introduction reveals the difficulties of writing about the Murdoch family legacy, which was carefully guarded by Keith’s wife, Dame Elisabeth Murdoch, and is now no less dearly protected by her son Rupert.

When Roberts started, he writes, the only three large works on Keith Murdoch had been commissioned by the family or by the Herald and Weekly Times in Melbourne. In 1970, another full-length authorised biography commissioned by the family, written over five years by Charles E. Sayers, was never published, after Rupert Murdoch withheld permission upon receiving the manuscript.

Roberts sought no particular assistance or permission from the Murdoch family, he writes, relying mainly on the documentary evidence Keith Murdoch left behind. But getting access to some source documents — particularly those held at the Herald and Weekly Times, was not always straightforward. “It was only after a period of months and multiple letters, emails and vetting via the telephone that I had been granted access to the records of the HWT — the media company with which Keith had been most closely associated and that Rupert in 1987 had brought back into the family fold,” Roberts writes. He adds that he was asked by the HWT chairman, Julian Clarke, to specify the exact dates and topics he wanted to pursue — these were checked before he was given access to them. He was provided with a desk in an anteroom to the chairman’s office to pursue the files. When he asked for access to 90-year-old company minutes, he was only given photocopies of specific pages. The full tomes, which had been hauled out from storage, were left “tantalisingly on a side table”. Roberts does not reveal whether or not he took a peek. — Myriam Robin

Swallow that pride. As predicted by Crikey, that loss of the English Premier League broadcast and live streaming rights to Optus has forced the Murdoch clan and their courtiers to swallow their collective pride and make a quick move to try to lock up the pay TV rights for the NRL before anyone else can grab them. After spending weeks bagging the NRL for daring to deal with the Nine Network and daring to exclude Fox Sports and Foxtel, the Murdoch’s News Corp Australia now wants the rights — but not without the typical Murdoch thrust for a deal from a weak negotiating position.

But the bottom line is that without the NRL rights, the value of Foxtel and Fox Sports will drop dramatically, and in turn slash the share price of News Corp (and the size of the Murdoch’s fortune). The NRL dominates the most watched program lists on pay TV with over 65% of the top 100 programs each year an NRL game. The 100% of Fox Sports and the 50% of Foxtel would have a balance sheet value (including debt) of close to $4 billion for News Corp — although the 50% of Foxtel doesn’t not appear directly in the accounts. That value could halve from 2018 onwards if the pay TV rights were grabbed by someone else.

News Corp papers and now Fairfax Media outlets suggest News wants to deal only if Nine sells back the Saturday night game it has bought in the new post-2018 rights, and agrees to give Fox first crack at the weekend coverage with a game kicking off at 6pm on Fridays. News is also prepared to pay $15 million a year to have the simulcast rights to all NRL games each round (which is how the AFL rights are currently shared by Seven and Fox Sports). Nine is said to estimate the simulcast rights at more than $15 million a year (the total for that right will reduce Nine’s $925 million five-year deal). The Monday night game is disappearing (Monday night football is nowhere near as popular as it is in the NFL in the US). Four pay TV games will cause Foxtel’s audiences to drop sharply from 2018 onwards, which will cost it valuable advertising revenues. — Glenn Dyer

Video of the day. From Springfield to Wodonga — The Simpsons puts regional Australia on the map for the first time since their infamous visit in 1996. 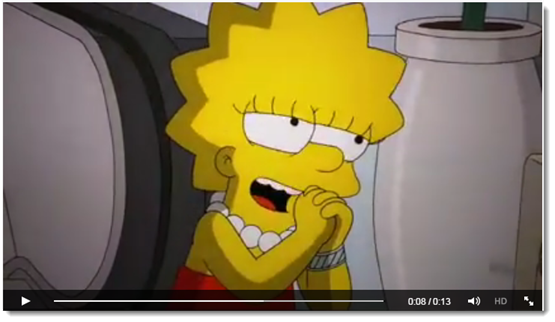 Front page of the day. This week’s Aussie edition of The Spectator gives us a rap on the knuckles for not understanding how coal is good for humanity. 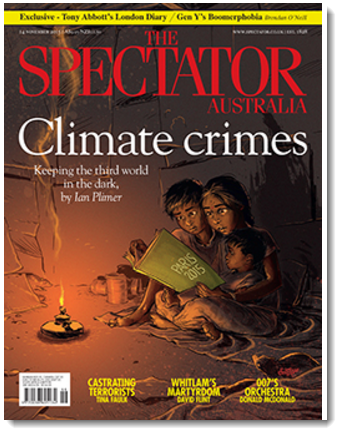 “He was provided with a desk in an anteroom to the chairman’s office to pursue the files.”

Pursue? Were they running away to protect their identity, maybe? Were they scared of being misrepresented, perhaps? Possibly they might have preferred to be perused.