Kiwis unhappy about Christmas Island. The riots at Christmas Island were barely a blip on the radar in question time in Canberra yesterday, but the controversy caused a raucous argument in New Zealand’s parliament, with Labour members walking out after Prime Minister John Key said: “What the Labour Party is saying is ‘to hell with the rest of New Zealanders — these people should be put on a commercial aircraft and dispatched to New Zealand’. Well, you back the rapists, and I’ll back New Zealand.” According to this report from Channel 3 news, the Kiwis are divided on what is happening at the centre and whether or not they want the detainees back at all: 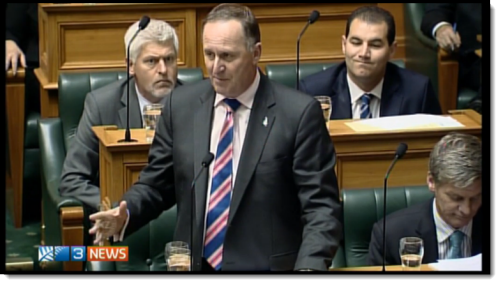 Remembering the Dismissal. While the focus today is on how the Dismissal played out, we also asked some journos who remember working on the day. Plane Talking’s Ben Sandilands tells us he was acting chief of staff for ABC’s Melbourne radio news department at the time, and as soon as the phones rang, it was all hands on deck:

“My partner, who worked in the fashion trade in town, rang me minutes before the news broke in Canberra saying she had heard that Whitlam was being dismissed by Kerr and was this true. I patiently explained why that would be unlikely. No sooner had we finished talking every phone in the building more or less began to rang at the same moment and John Allen, the news editor for ABC Victoria if I recall the title correctly, called a round table meeting at which the news resources for the day were all pulled off everything else to deal with the sudden tidal change in priorities, focused of course on Liberal HQ in Treasury Gardens, at the Melbourne Stock Exchange (as it then was) State Parliament and Trades Hall.

“The ABC teams were formidably staffed in those days with plenty of talent, cars and assistants, and slotted in well with the TV operations out at Rippon Lea.

“Everyone worked well into the night.  It resembled in intensity the day the West Gate Bridge collapsed.”

Chairman of Private Media (Crikey‘s publisher) Eric Beecher missed out on the huge news story as a junior reporter at The Age though:

“I was an extremely junior reporter on The Age, assigned for a few days to Adelaide to work on a dreary ‘advertising feature’ (the forerunner of what today is called content marketing). When I heard the extraordinary news of the dismissal on the radio I was getting ready to conduct a boring advertorial interview and I thought to myself: I know exactly why I went into journalism, and this isn’t it. I couldn’t have felt further away from that mission if I was in Siberia.”

The opening of an envelope. A tipster tells us that the Australian Electoral Commission has been contacting silent electors — those whose names appear without their address on the electoral roll — offering them a reply-paid envelope to mail back their updated details to the AEC. The only problem was that the envelopes were already sealed.

More art drama. Members of the NSW Art Gallery Society were told over the weekend that Judith White had resigned as executive director of the society, and Crikey hears that it has added to the bleak state of morale at Sydney’s iconic gallery. Amid redundancies among AGNSW staff, White has announced she will leave her position with the members’ organisation at the end of the year.

White was executive director of the society between 2000 and 2008 and returned to her former position last year. In an email statement announcing her departure, society president Les Moseley said:

“Judith came back to Sydney in March 2014 to steer the society through a challenging period of transition.”

“She was initially appointed for three months but it soon became obvious that more time would be needed.

“During the relatively short time she has been back Judith has made an impressive contribution to the society and the AGNSW.  She has strengthened the gallery’s membership operations by re-invigorating key member programmes, arrested a decline in membership, worked closely with volunteers, appointed a new Look magazine editor, undertaken a successful staff restructure and substantially increased the society’s operating surplus which goes principally towards building the gallery’s collection.”

Staff told Crikey that White’s departure was a direct result of a sustained policy of cost-cutting, trimming and outsourcing by the gallery’s senior executive team.

But while budget pressure is being applied to gallery staff, executive salaries are still high — director Michael Brand receives more than $460,000 a ear, almost twice the salary of former director Edmund Capon, while three of his lieutenants receive between $240,000 and $300,000 — and expensive outside consultants continue to be hired.

Management insists that its “budget restraint” is a necessary condition for financing the proposed $450 million Sydney Modern project, which will transform the 120-year-old AGNSW.

White particularly objected to management strategy of bringing the Art Gallery Society under the control of the gallery’s executive team.

When one society member expressed the view that the organisation should go along with the gallery’s incremental takeover, White reportedly quoted Margaret Thatcher saying: “You turn if you want to. The lady’s not for turning.” And she promptly resigned.

Anyone want to work at Apple News? A tipster tells us that the Apple is still on the lookout for an editor for its newly released Apple News app, with a job advertisement still online three months after it was first post. Says our tipster:

“Will any Australian journalist live up to the standards of the world’s richest company? Apple has been advertising for an editor to drive Australian content on its newish news app for more than three months. Applicants are in the dark and the ad keeps getting reposted regularly. Does anyone fit the bill?”

Tips and rumours: more changes at the Art Gallery of NSW

Tips and rumours: Gonski to the gallery?

So where was the Electoral Commission allegedly sending the envelopes, when contacting the electors whose addresses they don’t have?