Isentia Index: Will election 2016 be another GST referendum?

PM Malcolm Turnbull and Treasurer Scott Morrison (up three places this week) spoke at the Economic and Social Outlook Conference last Friday, giving media enough fodder to keep tax reform, specifically a possible rise to the GST, in this week’s headlines. A Parliamentary Library study suggested it would be fairer to bring back the carbon tax than changing the GST, with Greens leader Richard di Natale — entering our index this week in fifteenth place — claiming it would raise just as much revenue and reduce pollution. Morrison has hinted at wider changes to the system, including superannuation concessions, but denied Australia has a “revenue problem”. Morrison also described personal income tax as Australia’s “silent tax” and said someone on the average wage would be in the second-highest tax bracket, paying 37 cents in the dollar next year due to bracket creep.

A media release clearing Opposition Leader Bill Shorten of any wrongdoing after an investigation by the Royal Commission into trade union corruption raised eyebrows when it was released late Friday night, with Labor and the Greens calling it an attempt to avoid media scrutiny. Former PM Tony Abbott is down two places this week, with Attorney-General George Brandis last week claiming Abbott was the subject of “bigotry at its most shameful” and that Australia has an inconsistent approach to religious tolerance. Don’t we all have the right to be bigots, Attorney-General?

Health reform is also on the agenda, with Health Minister Sussan Ley hinting that smokers and those who are overweight may pay higher health insurance premiums, and launching an online survey of consumers’ expectations of private health insurance after 500,000 all-inclusive health insurance policies were reportedly “dumped or downgraded” in the past year. Another death of an asylum seeker has seen riots at the Christmas Island detention centre, with Immigration Minister Peter Dutton visiting a Jordan refugee centre and assuring us that it had much worse conditions (open fires, leaking sewage) than what Australia provides offshore.

Trade Minister Andrew Robb, up 20 places this week into seventh, is dealing with criticism after the Trans-Pacific Partnership (TPP) document was released in full, warning people not to “jump at shadows”. Reportedly the environmental chapter doesn’t mention the phrase climate change. 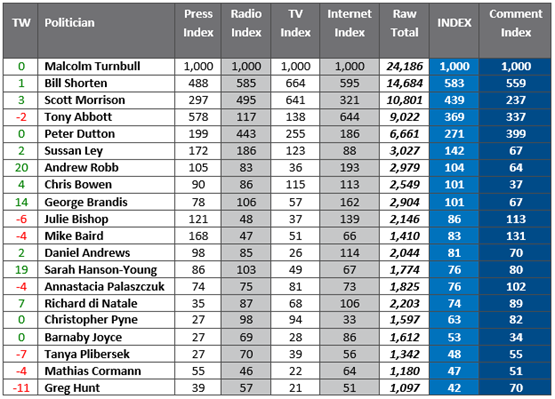 Tax was getting them even more excited on talkback, with best call going to Stuart on 3AW , who says the PM used a word he does not like, “incentivise”, and helpfully points out that irregardless is not a word. Thanks, Stuart!

Nine weeks in, Bindi is pretty far along in the US Dancing with the Stars, with her Vietnamese waltz earning straight 10s from the judges last night, and reports she had to prove her father’s death in court to claim her earnings drew the ire of Australian media.

Yes, let’s bring back the carbon tax. It is better to tax a “bad” rather than a “good”.

A tax on sugar might change our ways to the good too. Then at budget time, newspaper headlines could say “tax up on beer, cigs and lollies”.