Suu Kyi Myanmar’s victorious angel, but The Lady has her work cut out for her

The West, like the people of Myanmar, has placed outsized expectations on the shoulders of a 70-year-old woman with nil economic, diplomatic or management experience. 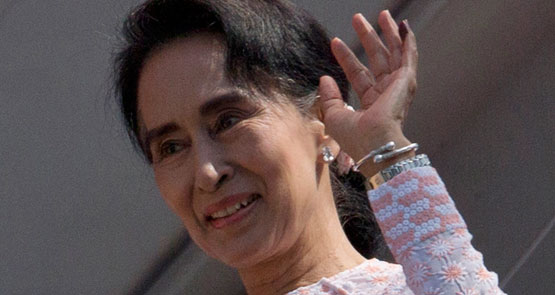 Myanmar’s generals are facing their moment of truth after the country’s Union Election Commission confirmed last night that former political prisoner and Nobel Peace Prize laureate Aung San Suu Kyi’s National League for Democracy has won the majority of the vote in the country’s general election.

Now comes the hard part. The painstaking negotiation between the two main sides: the election’s winners and Myanmar’s military, known as the Tatmadaw, which still holds 25% of seats in the legislature and controls, per the 2008 constitution, defence, home affairs and border security.

As Mao Zedong was fond of pointing out, power comes from the barrel of a gun. So on November 5, when Suu Kyi, at her only press conference of the campaign — held in imperious style on the rolling lawns of her lakeside family estate — said she was committed, should the NLD win, to a government of national reconciliation, she wasn’t just playing nice but bending to bitter reality.

The final extent of her victory remains unclear. The NLD is predicting it has won 80% of the vote, a figure most analysts think may be too optimistic, but the outlying areas of  the country — from where votes will take many days to roll in — will not favour it so much. Ethnic parties are expected to pick up 100 seats, perhaps more, pushing her into coalition talks, although there are already formative alliances with many of these groups.

Still, what is clear now, if it was ever in any doubt, is that Suu Kyi is the most powerful civilian politician in the country. The singular reason for the NLD’s stunning victory is the woman known across the country simply as “The Lady”.

The NLD’s victory is all the more remarkable against a government commonly referred to a “quasi-civilian” but that is really a military junta by any other name — fronted by ex-generals who have swapped their uniforms for the national dress of the button-up, collarless white shirt and coloured wrap-around longyi. They have controlled the flow of funds to electorates and much of the television and print media.

But the overwhelming desire for change has been palpable across Myanmar during the two-month campaign across the country. Suu Kyi has pulled huge, rallying crowds as she has ventured into the ethnic states she has been criticised for falling to focus on.

Even in the desperate domestic refugee camps near Sittwe, in the north of religiously torn Rakhine state, the 150,000 or so ethnic Muslim Rohingya — barricaded into the camps and surrounding villages by the current government in south-east Asia’s own vile version of apartheid — know that she is their best chance of eventually escaping their appalling situation.

Amid the euphoria expressed by almost everyone you meet in Yangon right now, and the rock-solid belief in Suu Kyi, is the grim reality that is Myanmar today.

It remains one of Asia’s most impoverished nations with an average income of less than US$1000 per year — the majority of its people survive on considerably less. Its infrastructure is generally diabolical, its healthcare system non-existent and most of its children drift out of education, such as it is, at the end of primary school.

The reform and opening-up program started by the military after the sham 2010 election, held when Suu Kyi was still under house arrest and in which the NLD did not compete, is only still very nascent. With foreign money flowing into south-east Asia’s most resource-rich country, the government has hit its foreign investment targets this year.

The key problem for its regular people is that the spoils are being kept by the military elite and their cronies. It’s is the story of modern Asia writ particularly large, and the answer to anyone who asks why the generals began the process in the first place: to cash in at least some their chips.

The baseline is that while Myanmar has had a relatively trouble-free democratic election for 75% of its parliament, it remains subject to a constitution that is anything but democratic and leaves much power with the military. The country’s institutions are weak — there is still ongoing debate about which principles would underpin its new legal system, the fundamental building block of all democratic societies. Will it be common law used by the Anglosphere, or the Napoleonic code favoured by the Europeans and north Asians?

Layered atop that need to be a range of independent institutions not beholden to the military and eventually a radically reformed constitution.

If in coming months Suu Kyi can pull off a satisfactory result with her negotiations ahead of February’s vote for president, and the military does cede some power, then of course come the hard (in some ways impossible) yards of living up to the fantastical expectations that the people of Myanmar have of her.

The election was an almost entirely policy-free zone from both the major parties, as well as for the 89 others that contested the poll. It is still desperately lacking in the soft infrastructure of a knowledgeable and capable bureaucracy that can help build the country’s future. The degree of difficulty for achieving even the most basic reforms cannot be underestimated, nor should the time frame to do it

Many believe that the US, led by then-secretary of state Hillary Clinton, rushed in too soon to lift many of its sanctions on Myanmar. This gave nations like Japan, Singapore, Thailand and and South Korea, in particular, licence to dive back into the country in a gold rush for its spoils. Australia, for its part, was only too keen to follow, as did the EU.

The West, like the people of Myanmar, has placed outsized expectations on the shoulders of a 70-year-old woman with nil economic, diplomatic or management experience. The myriad possibilities of what can go wrong do not, frankly, bear thinking about. (For the serial issues that come with the the ascension of a monolithic party that dominates politics, see the African National Congress in South Africa.)

Still, as we have seen in this election, much can also go right. So for now, we should celebrate a remarkable and famous victory. And we should hope, for the people of this endlessly fascinating and beautiful country, that  the grinding wheels of reform will now continue on better path to a more promising future.

Anyone who has watched Thailand’s problems since W.W. II will be hoping, but doing so with at best only limited confidence.

My concern is that Kyi will turn out to be, like Benazir, the acceptable face, purely for Western ignorati, of corruption as multinationals rush in for rapine, a field until recently enjoyed at leisure by China.