Rundle: is the Malcolm honeymoon over?

The bloom may be off our relentlessly optimistic PM ... 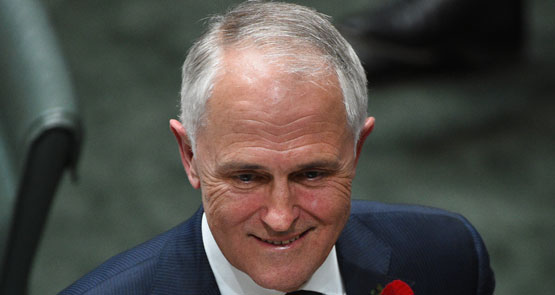 Well, if the honeymoon ain’t over, there has at least been the first tiff. Prime Minister Malcolm Turnbull’s appearance at Melbourne Uni last week was meant to be a bit of a love fest over innovation with university vice-chancellor Glyn Davis, whose involvement in Australian government is now apparently compulsory. When Davis was asked a question about academia and business and replied with some fairly forthright remarks about the disappointing results so far, Malcolm went off on what can only be described as a bit of a tizz. “Well that is, if I may say, not very optimistic, and optimism is the new fashion,” said Turnbull in a slightly hectoring tone, as Davis laughed coquettishly to fill. As Turnbull went on and on until it became embarrassing for all present — “your students are optimistic and you should be too if you want them to respect you” — Davis tried  to work out what to do to the PM in circumstances in which you’d ordinarily nut someone. It was a bit over the top. “It was a bit over the top,” said Andrew Bolt, on his Report, the return of a Mickey Mouse show to Sunday morning. When the Dolt thinks you’re over the top, it’s time to pull it in.

The clash itself was fairly representative of a contemporary split. The genuine pursuit of knowledge involves, at some point, the consideration of evidence, which was what Davis was expressing. The political right abandoned knowledge and evidence long ago, starting with climate change, moving onto wind farms, and then to everything else. Turnbull is Copernicus compared to the nut jobs who preceded him, but he appears to have reached for the same sort of blather, in an attempt to cover an awkward moment, which became awkward in itself. The fetishisation of optimism is a characteristic of the business Turnbull was involved in, pre-politics — the sort of venture capitalism packaging, repackaging and reconceptualising more mundane processes, and then selling them on at a mozza. Believe in the pitch and so will your pigeon.

That’s business as usual in business, but it’s a high-risk strategy in politics, where scrutiny may be all the greater. Yet it is, of course, the only strategy available to sell that magic-beans approach to the structural transformation of the Australian economy, now making its sixth or seventh appearance since its debut in the Button era. “Innovation”, then “???????”, then “$$$$$$”. This sudden grasping for innovation may be something that Turnbull believes in personally, and it is a way of differentiating utterly from his predecessor, but it’s also obvious to everyone that it’s there as a narrative to take us to the next election. The very thing that needs intense study — you know, evidence, reality testing of the sort that, if done properly, makes optimism or pessimism counterproductive — is exactly what’s being done on the fly.

But I think the outburst tells us something more interesting about Turnbull, and something that may become of political significance. Turnbull appears to have been hostile to negative thinking all his life, since being a mad punter law student who occasionally attended a lecture, a man already making his run (and seen as such by those around him). I wonder if some of that comes from the signal event of his life, the departure of his mother when he was nine years old — she left a country she hated, and her family, and her child. Turnbull, before his 10th birthday, became less a self-made man, than a man-made self.

The great psychoanalyst Winnicott said that children of depressed or departed mothers will feel like they have been “dropped forever” and their lives may well be grouped around a need to avoid melancholy at all costs, lest the abyss claim them. Relentless programmatic optimism is one such strategy. What one saw in the Turnbull-Davis encounter was less bullying or berating than a brief spasm of panic. A very interesting moment, and one echoing Turnbull’s behaviour in the Godwin Grech affair, when his relentless desire to believe he had an election-winner and Abbott-killer led him to reject the most obvious warning signs. As we have been repeatedly reminded in the past two years, the character of a government descends from the character of its leader. So that would be something for Labor to work with if they had the ability and wit and hahaha I cant even finish that sentence. Still, with the honeymoon over, and the grim business of cohabitation about to begin, we may be in for innovative times.

Surely the honeymoon officially ended back in October when members of the NSW Liberal Council booed Turnbull’s assertion their party wasn’t run by factions or backroom deals. This reaction occurred at a blue ribbon event.

The rest of Oz is still captivated by Turnbull’s mannered charm & is a little slower to twig. Besides, we’re still grateful not to have depressing Tony giving us a daily serve.

Judgement is his nimbleness’s Achilles heel..sometimes wrong never in doubt..the last time Mal ran a campaign he tried to blame Howard for breaking the nations heart but it was mostly his own hubris that saw the queen returned..

So is Malcolm a seven on the Enneagram?

[So that would be something for Labor to work with if they had the ability and wit…]
Oh dear, if only.

Guy – I’m in a state of shock! You don’t mean to tell us that Turdball has flaws… isn’t perfect?
Good Looord – I will need to go have a cup of tea, a bex and a good lie down!!!!!
However, you are not quite there yet….just had to have the obligatory ‘go’ at Shorten I suppose…..whether he deserved it or not.