Who will replace Mark Scott? Plus other media tidbits of the day.

Off the list. Despite his name appearing almost everywhere (including in Crikey), it’s looking very unlikely that University of Melbourne’s well-connected vice chancellor Glyn Davis is set to be the ABC’s new managing director. Davis just had his term at the University of Melbourne extended by two years, to the end of 2018. The extension comes as something of a surprise to University of Melbourne insiders, who had speculated the professor had more or less finished what he wanted to accomplish at Melbourne University. The Melbourne Model is bedded down, after all, and he’s been there since 2005.

The current managing director, Mark Scott, steps down in the middle of next year. — Myriam Robin

Too white for SBS? That’s what celebrity chef Ben O’Donoghue thinks, according to the Herald Sun. Today it quotes him saying:

“I pitched a show, World on Fire, to SBS which involved travelling around to all these countries and looking at barbecues but no one picked it up.

“SBS said, ‘I wasn’t an SBS presenter because I am a white caucasian male’.”

Mind you, the very next line has him saying he’s just “reading between the lines”, so we guess no one explicitly said that was the reason to O’Donoghue. Anyway, not all was lost. The chef has a new show, also pitched around barbecues, starting on Channel Seven. No risk of being knocked back for that reason there! — Myriam Robin

Taking out the trash? The 8pm release of a finding that recommended no criminal charges against Bill Shorten by the Royal Commission into Trade Union Governance and Corruption was not an attempt to bury the news, its solicitor has insisted, in a letter to Bill Shorten’s lawyer made public yesterday afternoon. Solicitor assisting TURC James Beaton wrote:

“I am aware of reports that the release of the submissions was timed to avoid media scrutiny. I can assure you that was never contemplated. The Commission’s sole objective in releasing the submissions on Friday evening was to meet a legal deadline and thereby honour its commitment to all affected persons who only have 14 days to respond to their submissions.”

It follows Shorten saying the timing of the release was typical of how the “politically motivated” inquiry operated. — Myriam Robin

‘Tis the season of blatant plugs. Case in point in yesterday’s Wall Street Journal section of the Oz, which under the guise of a report on Christmas book sales, notes that “HarperCollins Publishers, for example, has printed 700,000 hardcover copies of (title redacted by Crikey to not further the plug), a story narrated by a guitarist touched by the supernatural. HarperCollins, like the WSJ, is owned by News Corp (publisher of The Australian).” What a masterpiece of modernist compression that disclaimer is. Kids should be given that to read for Christmas — the fairytale of an independent right-wing media. — Guy Rundle

Dud survey for SCA in Sydney. Southern Cross Austereo’s star-studded attempt at clawing back dominance in Sydney after it lost Kyle and Jackie O more than a year ago appears to have hit some early turbulence, with Hamish and Andy’s drive slot losing 1.2% of its audience in their second month on air. But the duo are killing it in Melbourne, keeping Fox at the top of the Drive ratings with a 12.6% audience share.

In their debut survey last month, Hamish and Andy only managed to lift the slot 0.3% to a 6.8% total share of audience in Sydney, which meant nine of the 15 stations in the survey had an equal or better audience share. The network is banking a lot on the duo’s success — across both markets. It was reported at the time of their signing that they were each pocketing $4 million a year, making them the best-paid radio hosts in the country.

Farewell to Downton Abbey. UK viewers said goodbye to Downton Abbey’s regular season on Sunday night with its best figures for the sixth and final season — 8.8 million viewers, which is still an audience for TV producers to drool over. But the program is finishing at the right time — previous seasons have brought audiences of 9 million or more for individual episodes, so it was starting to outstay its welcome. The final episode will be the now usual Christmas special. Seven Network screens Downton Abbey next year here. — Glenn Dyer

Front page of the day. From the magazine of the Centre for Independent Studies. The nail polish and jewels are a nice touch … 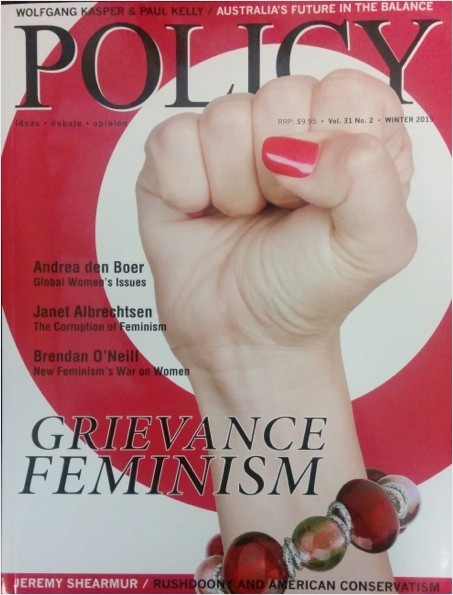 Hamish and Andy would probably do much better if they introduced comedy into their act.
as their TV series so clearly illustrated