Poor Bill Shorten. Even his own party loves Malcolm Turnbull. 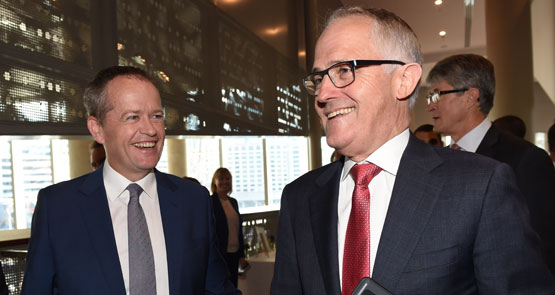 Labor voters are evenly split as to whether Malcolm Turnbull or Bill Shorten would make a better prime minister, according to Essential polling released today.

Q. Who do you think would make the better Prime Minister out of Malcolm Turnbull and Bill Shorten?

The polling, with a sample size of 1722 respondents, found the Coalition maintaining its two-party preferred lead on Labor, 52-48, down from 53-47 last week.

The announcement last week from the Prime Minister that the government would, again, abandon awarding the honours of knight and dame in Australia, despite getting some staunch monarchist noses (like David Flint’s) out of joint, has overwhelming approval among voters. A total of 63% of voters approve the change, with 15% disapproving. This was highest among Greens voters at 72% approval, but even among Coalition voters, it still had a 65% approval.

As the government continues to float the prospect of increasing the goods and services tax to 15%, Essential shows it has its work cut out to make the case for a GST increase. Voters are evenly split between increasing GST and increasing income taxes, at 27% and 26% respectively. More respondents (at 33%) simply said they did not know what action the government could take to raise more revenue and reduce debt.

Q. If you had to choose, which of the following changes to the GST would you favour?

There was little support among people who can already vote to lower the voting age to 16, as floated by Labor last week. Essential found 77% of all voters favoured keeping the compulsory voting age at 18, with just 14% backing Labor’s proposal to reduce the voting age to 16, but make it voluntary until voters turn 18. Just 4% of people support making voting compulsory for people aged 16 years and over. Even among Labor voters, there was little support for Shorten’s proposal, at just 16%. It had better traction with Greens voters at 35%.

The sense of relief at the reining in of The previous Speaker of the House of The Representatives, BishopB, the removal of Tony Abbott, with his constant and relentless aggression and negativity, the silencing of Joe Hockey and the relative calm from Pyne is almost palpable. Sort like getting a nasty boil lanced.
Turnbull speaks in a calmer tone, but the underlying nastiness of the Far Right still echoes.
Unfortunately Shorten will have to prove why he should be PM, not just wait for the Libs to stumble
Maybe be when the gallery fall out of love with Turnbull, we will see the real picture..

On current polling you’d have to wonder why Turnbull hasn’t called a snap election..his problem is that he doesn’t have any policies that are remotely palatable..if raising the GST..abolishing penalty rates and Americanising the health system are examples of what’s to come his campaigning skills will need to have improved since his republican push when he managed to get Australians to vote for the Queen..

All I want for Christmas is a P.M with Turnbull’s brains BUT,
with the ability to understand the appalling environmental mess this country has become.

On the issue of doing away with knighthoods, and damehood. Yeah! Olé! You beaut!

Bill Shorten as leader of the Opposition??? Do me a tiny!! What the Labor Party needs is another Paul Keating.

Venise – You can either have Turdball, who waffles on endlessly, and you can bet your last dollar will come up with policies that favour the wealthy. Or you can have Shorten and the Labor party, slow and sure, who have already released a whole raft of POLICIES (with more to come), which DON’T punish the poor. I know which one I’d prefer.
Keating was that rare politician who did both – waffled on, but also produced great policies which set this country up for generations to come. Turdball is NOT a Keating, no matter how much the media tries to suggest otherwise!
Get off Shorten’s back for a change. People like you are just being taken in by all the media hype!!