Gossip served cold. The top story in today’s Media Diary is a curious tale of a bike belonging to ABC journo Tim Palmer that he believed to be stolen. It turned out the bike was taken by accident by his good friend, ABC investigative journo Stephen Long, who had thought the bike had been abandoned by its owner. Police were called when the bike was believed stolen, but after the explanation came out the ABC decided to handle the matter internally — Long had only taken the bike because of an email saying that bikes sitting idly in the bike shed would be disposed of.

Much of this is in today’s Oz, though one detail is missing. The story, media diarist Sharri Markson wrote, “continues to captivate” ABC staff. Which is a bit unlikely, according to Crikey’s sources, given the incident took place in December 2012. Ms Tips understands several journalists have been told the story over the years but have decided not to run it, because it was all a misunderstanding and because, by now, it’s just so damn old. So why was it leading today’s Media Diary?

Mind your manners. A meeting about the government’s new cashless welfare cards took place in Ceduna, South Australia, on Saturday, with locals still divided over the plan. We reported last week that the residents of Ceduna were less than impressed with their mayor Allan Suter and assistant minister for social services Alan Tudge over the notice they were given of the meeting, but the ABC reports there was about 100 people in attendance. Our tipster tells us it was a tense atmosphere, and that Tudge was rebuked by locals over his manners:

“When people asked questions he appeared disinterested and was holding conversations with others. This prompted one lady in the audience to complain to him about his poor manners. Questions that required a simple yes or no answer received 5 to 10 minutes of spin all designed to waste time and do lip service to a community consultation. Mima Smart, Chairwoman of Yalata Community Council came along — she once again said in a room full of people that she only signed the MOU (memorandum of understanding) for those who had problems, not for everybody to go on it.”

Smart has been quoted in the media previously, saying the card should be targeted and not applied to all who receive Centrelink payments.

Illness in the eye of the beholder. A tipster from the State Revenue Office in Victoria is wondering just how this week’s Health Expo will help keep public servants healthy:

“The State Revenue Office in Victoria is holding a ‘Health Expo’ for staff in Melbourne on 12 November. This year the expo features health checks, seated massages … And consultations with Iridologists and Naturopaths. It’s one thing for a VPS agency to spend limited resources on naturopathy (a theory rejected by the medical community due to lack of evidence), but to go with something as bonkers as iridology boggles the mind. The executive often mentions their concern for staff health and wellbeing, and also raised concerns that the sick day average per FTE at the SRO is above the VPS average, so it’s hard to understand why they’re only offering consultations with alternative practitioners at their annual expo.”

Iridology is an alternative medicine practice that involves looking at patterns, colours and other characteristics of a person’s iris to determine health issues. The tipster tells us that the corporate gym that SRO staff had previously used shut down in February and there has been no other arrangements made. “Perhaps money would be better spent on subsidised exercise rather than whack job quacks who think the colour of your eyes tells them whether you’re carrying an illness,” said the tipster. We contacted the SRO to ask why naturopathy and iridology had been included in the health expo, and received a response from the State Revenue Commissioner Paul Broderick defending the department’s staff wellbeing program:

“The wellbeing program demonstrates the commitment that the SRO has to the health of its staff, and has evolved in consultation with staff to reflect their preferences – including a session exploring alternative medical approaches.

The bulk of the program consists of individual health checks including body mass index (BMI), cholesterol, blood pressure tests, and screening for diabetes. The program relies on the expertise of nurses and dieticians and has a record of identifying potentially life threatening health issues for staff.”

Gillard ducks, weaves. Former prime minister Julia Gillard faced a tough interview on Al Jazeera’s UpFront over the weekend, with host Mehdi Hasan grilling her about Australia’s asylum seeker policies. Gillard evaded questions about offshore processing, asylum seekers dying at sea, and the conditions in Australian-run detention centres. She blamed being in minority government for not being able to send asylum seekers to Malaysia and when faced with reports from Amnesty International and the UN Human Rights Committee, said: “I would dispute a number of those things.” Gillard also defended the conditions in which children were detained, and used the question to promote her current work with the Global Partnership for Education. 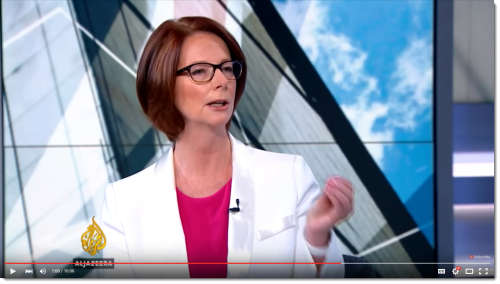 Human Rights Watch smacks down Australia. Human Rights Watch next year will commence research on people with disabilities in the criminal justice system in Australia, and Crikey is informed the research will also cover indigenous incarceration. Australia is undergoing its second Universal Periodic Review before the Human Rights Council in Geneva in the early hours of tomorrow morning. In addition to Australia’s shocking record over the treatment of asylum seekers, Human Rights Watch, in its submission to the UPR, said that people with disabilities often had inadequate access to legal and social protection when in contact with the criminal justice system, and the organisation also noted that there was a disproportionately high rate of incarceration of indigenous people in Australia.

Fishing for stories. The posthumous memoir and collection of the work of Robert Hughes, The Spectacle of Skill, is due in bookstores on November 17 and in an excerpt published in Vanity Fair over the weekend, Hughes gives a snapshot of journalism that definitely no longer exists, detailing overseas adventures and fishing trips that were part of the leisurely life of Time‘s art critic.

“Being the art critic of Time in the 70s was like enjoying a perpetual research grant from the most benign of foundations. I could go more or less anywhere I wanted, look at anything I wished to, and be paid generously for doing it.

He also includes the way to make one’s editor pay for a frightfully expensive dinner, which is also unlikely to ever be repeated.

Here’s the most valuable tip Crikey Land might receive this week / month / year /decade / whatever.
Try hard to come up with more worthwhile ‘rumours’ than is your norm.

Seems like you could feed any story about the ABC to the Oz and they’d print it.

How can anyone take the utterances of a gormless bint like Markson seriously?
[On The Dum last week she pulled out that old overworked Limited News prophylactic of “papers reflect the views of their readers”?]
From someone paid for her conservative take on reality, as a “Wizard of Oz”, working where she does – at the heavily subsidised conservative political PR management team that Murdoch (an otherwise free-marketeer – when it comes to others) subsidises to keep conservatism at the forefront of the Australian psyche? Working for a political outfit that edits “70”% of what we get by way of political “news”?
Where else do we get the form-guide, sport, the opinions of that minority of binocular journalists (that allow Limited News to pretend to be a broad church), and other “extras” for which we buy papers?
[“Seventy percent of us are dyed-in-the-bull conservatives that need Limited News to validate our world view”?
“In single paper states that figure rises to 100%”?
“The majority of us aren’t interested in the positive aspects of Labor, The Greens etc”?
“NotW was a reflection of a substantial slice of British society”?]

This “it’s just so damn old. So why was it leading today’s Media Diary?” is a rhetorical question, right?
It’s News Corpse, where facts & truth go to die.