At the weekend, former federal independent Tony Windsor spoke to a group of Aboriginal activists, farmers and environmentalists in rural New South Wales. 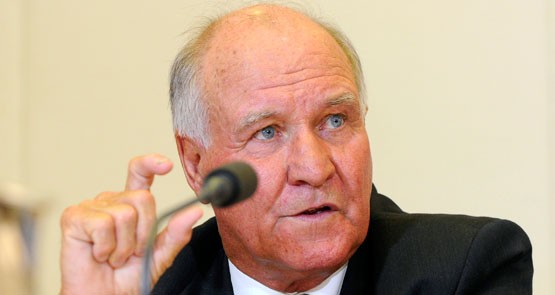 Former independent member for New England Tony Windsor has said that the coalition of white rural and indigenous groups opposing the Shenhua mine on the Liverpool Plains should practise mass civil disobedience and put themselves “under the leadership of the indigenous people” fighting the mine — and that he is “considering” challenging Nationals MP Barnaby Joyce in New England. Windsor believes that Shenhua is looking for a way out of the Liverpool Plains mine, but that the process will probably be approved.

Speaking to a gathering of more than 500 at the Harvest Festival near Breeza on the Liverpool Plains in northern New South Wales, Windsor told assembled farmers, local activists and members of the Gamilaraay Aboriginal nation that going to “Sydney, Canberra, Melbourne to lobby” was largely a waste of time. He instead urged them to link the issue of Aboriginal sacred sites and right to access of traditional land with the issue of water and the potentially catastrophic impact the Shenhua mine could have on the aquifers that feed the Murray-Darling river.

Later, Windsor told Crikey: “If you had 5000 people assembled at the Grinding Stones, under the leadership of Aboriginal elders, then they are technically trespassing on land owned by Shenhua. At that point, who’s going to make the first move?”

The Shenhua mine is yet to receive final approval from Environment Minister Greg Hunt. It would devastate thousands of hectares of rich “black soil” farming land and threaten the whole water system of northern NSW — and, downstream, the whole of south-eastern Australia. The Grinding Grooves are the most striking and significant indigenous traditional heritage sites in the area that Shenhua has bought up in order to submit the region to open cut. Ten out of 11 indigenous sites at the nearby Whitehaven mine have been annihilated, after the federal government let the investigation process run without making a ruling until the mine had commenced.

Windsor agreed with Crikey‘s characterisation of this as an MLK-style civil rights “strong civil disobedience” strategy, bringing the contradictions of the situation to a crisis point. “This would be led by representatives of the oldest civilisation in the world, not by professional activists, not by farmers and — well, what are Shenhua going to do? Have them thrown off one by one? What are the state government going to do?”

Windsor believes that the government is leaning towards approving the mine, but that the very reasons for its continued process in a world of falling resources prices, remain mysterious. He told the assembled crowd that his hope was that Prime Minister Malcolm Turnbull understood the issues regarding water and the mine, and water resources in Australia, that Barnaby Joyce didn’t, and that “Greg Hunt — well, who knows?”

Later, he told Crikey that “my spies tell me that Shenhua say that if they had their time again, they wouldn’t do it at all” and that the company might be “looking for a way out”. But he also believed that non-economic considerations might be driving the continued prosecution of the mine. “Who knows what the Chinese leadership are thinking?”

Windsor echoed the point made to the meeting by Jeremy Buckingham, Greens member in the NSW upper house, who received an enthusiastic response from the crowd, that NSW state and federal governments could stop the mine in a matter of hours if they chose to. In response to a question posed by Crikey — as to what it would take for rural people to stop voting in the Nationals, and then being sold out by their MPs — Buckingham said that “like coal”, the Nationals might have outlived their usefulness to rural Australia. Fiona Simpson, vice-president of the National Farmers’ Federation, told Crikey that the Coalition state and federal governments were “definitely the problem” while also pointing out that the Shenhua mine had been approved by Labor. But she appeared to agree with Buckingham’s contention that rural people should shift their votes around more, in order to avoid being taken for granted.

Windsor’s remarks appeared to be pointed, urging those protesting against open-cut mining and coal-seam gas in the region to be less accepting of the official process, and promises of genuine consideration by state governments (which have received $300 million from Shenhua) and Canberra. The sentiment was echoed by Aboriginal activists who told Crikey that “the time had come” to stage more militant protests in the struggle to have heritage and sacred sites respected — indeed, not annihilated — and access maintained. They also echoed Windsor’s implicit observation that the protest would have to see a more genuine and equal unity of white and Aboriginal communities opposing the mine.

The Shenhua mine is due for final approval at any time over the next several months. However, as one attendee at the event noted “when it’s approved — that’s when it really kicks off”. The easy way, or the hard way.